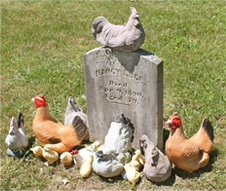 would like to introduce you to someone who lived what seemed to be a tiny speck of a life here on Martha’s Vineyard from 1814 to 1890. She did the best she could, against huge odds, which has caught the fancy of generations and has made her a folk hero. Her name was Nancy Luce.

or years, on my way up-island, I would pass the graveyard where Nancy Luce is buried, and notice the headstone at the back of the cemetery that’s surrounded in fake chickens — all colors, little and big, cement and plastic, in the snow and in the grass, but I never understood why they were there. 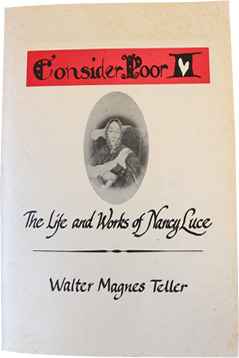 ne day, in our used bookstore, I found a biography of Nancy Luce, written by Walter Magnes Teller in 1984 (and out of print now), called Consider Poor I, and that’s where I learned the story of the chickens in the graveyard.

Consider Poor I. This was Nancy’s phrase. It was what she asked of those around her.

o let’s do what she asked. Nancy lived most of her life in a dark, lonely world of poverty and illness. She didn’t start out that way; when she was young, she was a good horsewoman, rode twenty miles to and from Edgartown, often, and did all the trading for her family. But she became ill in her early twenties. At the time, no one knew what she had, so they couldn’t help her. (I have a friend who’s a doctor and he thinks, from looking at her symptoms, she may have had Lyme disease.) Whatever it was, it was debilitating and it lasted the rest of her life. 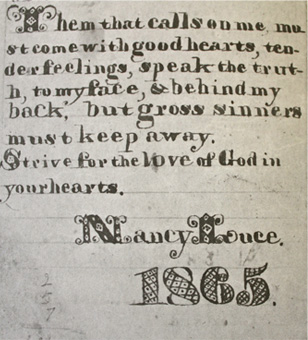 ust about the time she fell ill, her parents passed away; Nancy was on her own, and prey to avarice of family and neighbors; they tried to steal her home from her; there are minutes from the town meeting at that time showing what they tried to do. She fought them and won; but it left her vulnerable; her enemies didn’t like losing to her; it shamed them; she became the butt of local jokes (schoolboys came by to scare her and make fun of her), leaving her even more isolated than she already was.

he lived in her little house, all alone, winter, summer, spring, and fall, in the middle of nowhere (with no electricity, no personal physical strength, no family, and no money). What she had, were chickens, which she needed for the eggs they supplied. And she grew to love them in an extraordinary way. As anyone would in her circumstances. They were all she had. 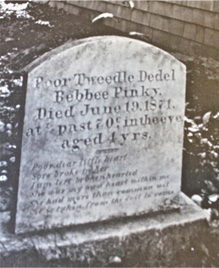 he other thing Nancy had, but probably wasn’t as aware of as I am now, was an indomitable spirit. I don’t think it gave her much comfort at the time, probably made things even worse, but it gives me great comfort to see how she soldiered on, despite the difficulties in her life.

he tried not to care what others thought; she loved her chickens, and so when they died, she buried them in real caskets, and spent all her egg money on carved granite headstones for them; she made a little graveyard for them next to her house. This of course made her the object of fun, people would come by to laugh at her, as if she was crazy or something, but she most definitely was not crazy.

ecause of her ailments, sounds were disturbing to Nancy, loud noise hurt her, inspiring her “enemies,” as she called them, to serenade her by

beating pots and pans at her door. Someone “brought in cow dressing and put it in my entry and shut the door against it.” She tells many stories of neighborly abuse. But despite everything, when she was around forty-six, and with no outside help, she had the courage, and amazing inner reserve, to write, illustrate, and self-publish her own small books; the first was called Poor Little Hearts, a book about her chickens. These books aroused interest from curious tourists who began to beat a path to her door (not everyone was horrible to her, some people were just curious). 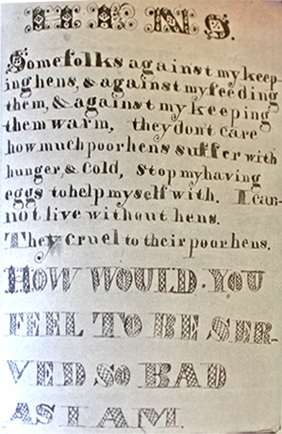 xploiting her own peculiarities, since it was clear people were interested; she tried to pay her way (taxes, wood for the fire) by selling the little books. She also had photographs taken of herself and her chickens (which is saying something for the 1860’s in nowheresville, USA). Others made money on her too; hundreds of picture postcards of her were sold, of which she got not a cent. Because of her own original self, because she followed her heart and did her best, Nancy ended up being the most well-known island person of her time, although there wasn’t much comfort in that for her. At the end, at age 75, she fell in her house, alone. It was days before anyone found her; she died shortly after, in poverty, and was buried by the town where she is today– surrounded by chickens left for her by admirers with “good hearts and tender feelings,” Nancy’s preferred type of visitors.

ancy was a folk artist and poet. She was fanciful and totally charming when naming her chickens (I took pains to spell them as they are written in the biography, these are not typos!): Teeddla Toonna, Lebootie Ticktuzy, Jafy Metreatie, Otte Opheto, and Aterryryree Opacky — to name just a few.

ne of her poems, called No Comfort (she wrote what she knew and she knew no comfort) starts like this:

You don’t know how hard it is to me,
Because I cannot ride somewhere,
I cannot ride, or walk, impossible yet,
I used to ride once in a while
On a canter, gallop and run,
O what a comfort that was.

When one of her favorite chickens,
Ada Queetie, died, Nancy was in terrible
mourning and remembering the good
times when she wrote:

Poor little Ada Queetie
She used to do everything I told her,
let it be what it would,
And knew every word I said to her.

If she was as far off as across the room,
And I made signs to her with my fingers, She knew what it was, and would spring quick and do it.

If she was far off, and I only spake her name, She would be sure to run to me at a dreadful swift rate, Without wanting anything to eat.

I used to dream distressing dreams,
About what was coming to pass,
And awoke making a dreadful noise,
And poor little Ada Queetie was making a mournful noise,
She was so worried for me.

ancy’s books were hand-written, covers were made from bits of old wallpaper, they were filled with vignettes of her life and loves (her hens). They were how she stood up for herself.

ust knowing about such courage reminds me of all the amazing, hard-working, giving, brave, and sometimes lonely people there are in the world. 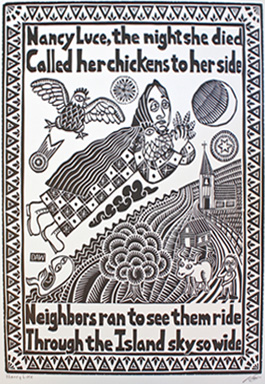 ecently I was at an Island Fair, one of the people exhibiting was a famous local artist by the name of Dan Waters. He had this WONDERFUL PRINT (printed from a carved block of linoleum on a hand-operated printing press), which, as you can imagine, I snapped up immediately and have hanging in my studio. Recently I asked if he could make a few more; I was thrilled when he said he would; I was thinking maybe some of you might like one. We only asked for a few; but I think we can get more of them if you’re interested. (Just click on WONDERFUL PRINT to learn more.)

Whenever I think I have troubles, I just have to look at my wall, see Nancy Luce flying with her chickens, and I feel much better. If she can do what she did, surely, I can do anything. I have electricity, I have a kitty, I have Joe, I don’t need a horse, and I have you.

Small towns make up for their lack of people by having everyone be more interesting. ♥ Doris Haddock