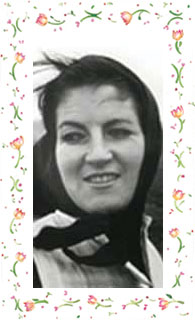 n 1953, a young (twenty-eight) Welsh secretary, Laura Ashley, living in a small flat in London with her husband and two little children, was working on a quilt project; a craft she had learned from her grandmother. She was looking for certain kinds of Victorian fabric designs to use in her quilt but couldn’t find the colors and patterns she wanted. 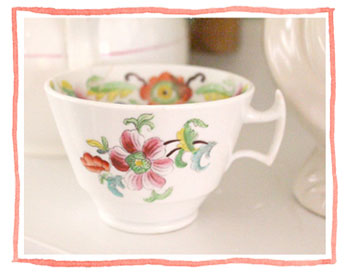 nspired by printed fabric she had seen at the Victoria and Albert Museum, she designed what she was envisioning, which her husband, Bernard Ashley, then printed on a few yards of linen on a machine he made himself in their attic apartment. That was the beginning; the original investment was about $20. But worth a gazillion in display of faith and pluck.

ooking at her work, I think her fabric designs were inspired by the old quilts she grew up with; the clear yellows and blues, soft romantic pinks, old fashioned milky greens; and the simple florals and prints you see in vintage quilts. I think maybe she was also in love with old China dishes. These two inspiration assignments are just conjecture on my part, because these are things that inspired my watercolors and I always felt she and I must be some kind of kindred spirits when it came to the colors and patterns we love. 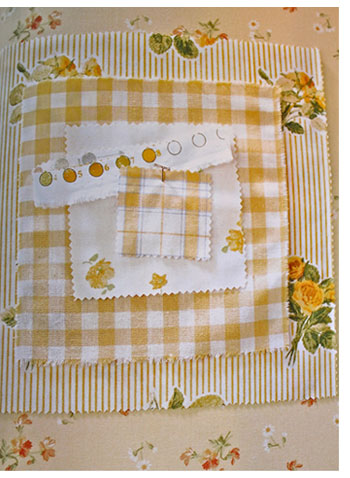 he cotton scarves Laura and Bernard made in 1953 were an immediate hit in local stores. People fell in love with their style and color sense. Soon Bernard left his job to print fabrics and run their blossoming business full time. They did it all themselves, built their business slowly, and at the same time, continued to grow their family. It was Bernard’s idea to call the business Laura Ashley; he thought it should have a feminine name.

Behind every great woman, there’s a great man (if she’s lucky), preferably one who cooks. 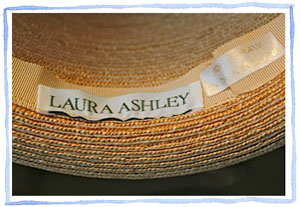 y the 1980’s, there were over 200 Laura Ashley stores all over the world, filled with the most wonderful things you’ve ever seen: cotton and linen dresses, crisp white blouses, nightgowns, straw hats, lampshades, flowery umbrellas, dishes, fabric, wedding dresses, sheets and comforters, and wallpaper all in the softest, most beautiful colors and classic styles. Laura Ashley was shabby chic before shabby was chic! Maybe she was a tad chic-er than shabby, but her things all had a very soft romantic feel to them. I still have decorating books she produced that show her classic design sense in the houses she and her family lived in. Laura and Bernard Ashley changed the way millions of people decorated and thought about the comforts of home. 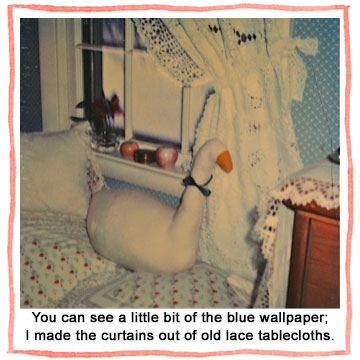 discovered Laura Ashley when I first came to New England. Whenever I left Martha’s Vineyard, I was always lost on the roads, especially when I got into the bigger cities, but still, like one of those beach geiger counters, the beep-beep in my head got louder and stronger as I honed in on the Laura Ashley store on Newbury Street in Boston. I never missed an opportunity to visit; would go to Boston just to go to that store, to be surrounded in the fresh colors I loved. I wallpapered my bedroom in my first house on the island in a sky-blue Laura Ashley print, and loved to wake up, still dreaming, in that blue cloud and listen to the birds singing, or watch the snow falling outside my windows.

remember one spring day, it might have been the first mild day of that year; I drove to Boston because I had a hair appointment. The daffodils were in bloom in The Common; I bought new dress at Laura Ashley. I wore it out of the store, walked up the street (thinking myself adorable, like Diane Keaton), went to my hairdressers where I got my hair cut — all clean and shiny, I then took myself and my Country Living magazine to lunch at a sidewalk cafe. That day is fresh in my memory; I remember feeling so happy and free and lucky in the sunshine with my new dress and haircut! 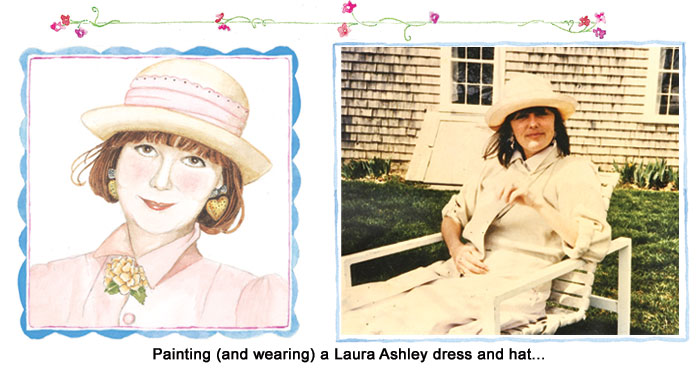 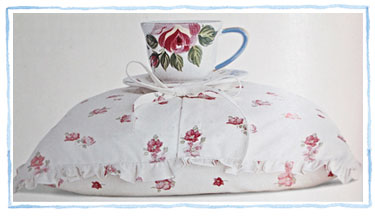 he Laura Ashley store was small, very close to The Ritz Hotel. The first thing you saw when you walked into the shop, was a table in the window set with Laura Ashley dishes for a tea party, on a Laura Ashley linen table cloth, with linen napkins and etched glassware. A person wanted to sit right down, drape herself with a napkin, pour the tea, click the cups into their saucers, but you couldn’t stop because there was more…

Just behind that was the clothing, rows of pure white cotton blouses, fitted with details such as capped sleeves, darts, covered buttons, some of them slightly gathered at the shoulder, some with stand-up collars; labels reading “cotton,” and “linen;” Made in Great Britain. The dresses were along the wall; skirts fluffed out like a colorful flower garden. The wedding dresses were toward the back in a glass case, like dessert, all whipped cream and lace; the furniture, wallpaper, and bolts of fabric, were up on a raised platform. It was heaven in there. I could’ve lived there. 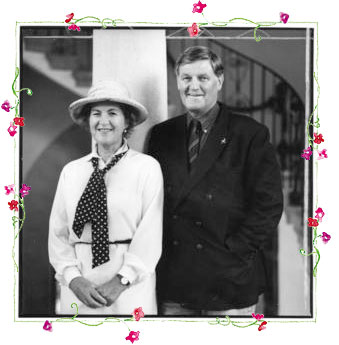 ou won’t find Laura Ashley on Newbury Street anymore, because (big disappointment to find out, I’m quite against it) nothing stays the same; the store is gone. In 1985, there was a terrible accident. On her sixtieth birthday, much too young, Laura Ashley fell down a set of stairs at her daughter Jane’s house and died a few days later of a brain hemorrhage. Even though her name lives on, the Ashley family is no longer associated with the company. The heart had gone out of it for them; the designing woman, cherished wife, and mother of four children was gone, taking the color sense, the genius that was Laura Ashley, with her. 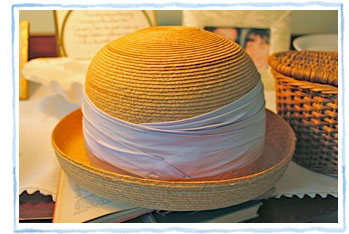 irls, if you never saw a Laura Ashley store you don’t know what you missed. I still have this wonderful hat, which I’ve never looked good in (I look like a bowling ball in it, it covers my eyes down to the tip of my nose). I knew I’d probably never wear it when I bought it, but I still could not resist such an adorable hat; it must be twenty-five years old now. I keep it in my studio, have painted it many times. 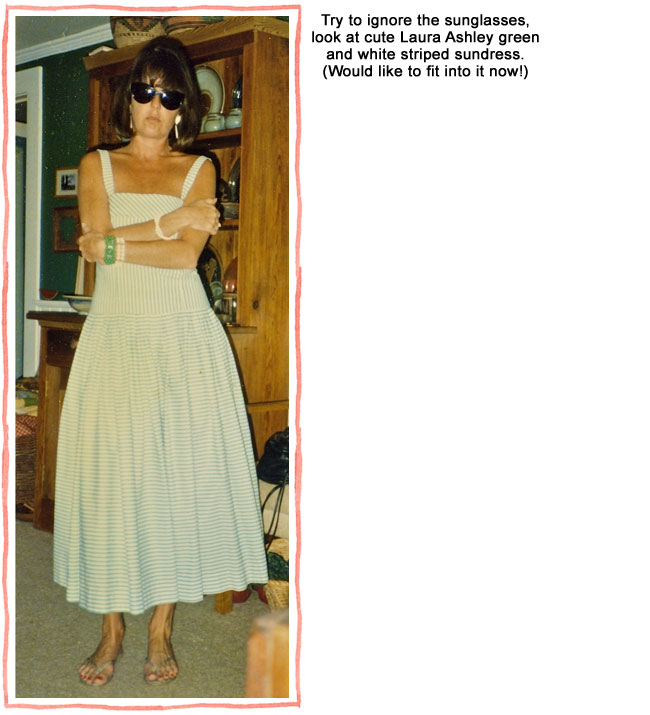 hen I think of inspiration, I think of Laura Ashley. She made the world a prettier place to live.

Are you a kindred spirit too? Comments…