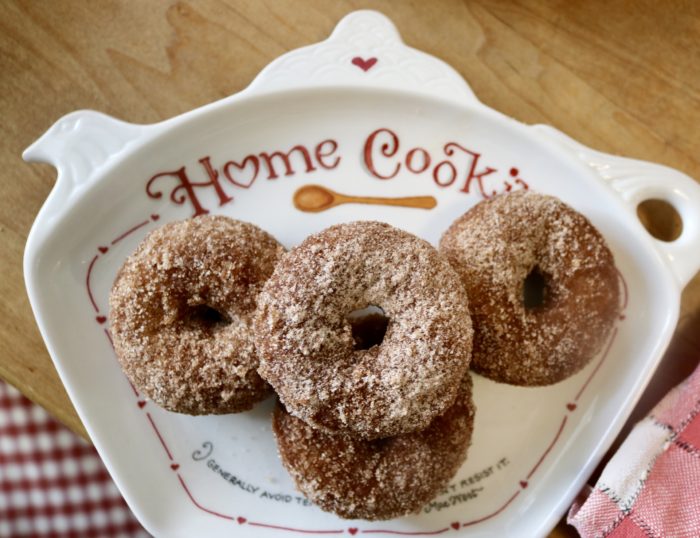 Because I couldn’t find them on the Island, I had to make them. Since they’re not here, I imagine you may not be able to find them either, so I thought this recipe could come in handy, for Apple Cider Donuts! They’re easy! They bake in the oven like a cake! You have to have them!🍁 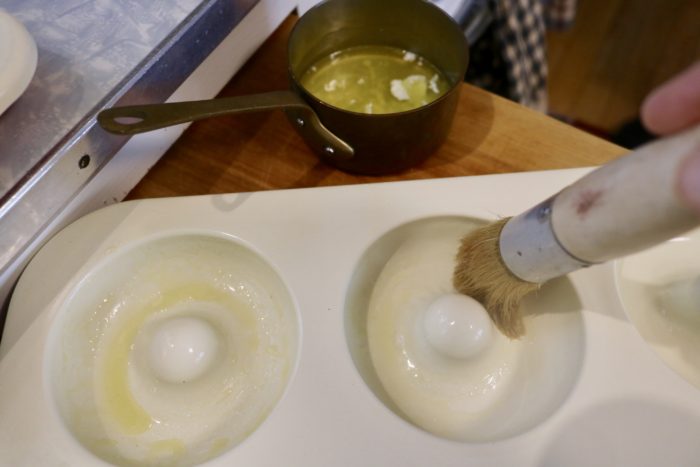 So Here’s what I did . . . first off, on the stove, out of sight, is a pan filled with Apple Cider (the plain, non-alcoholic kind) boiling down to a syrup (don’t worry, I’ll put the recipe at the end of the post). Then I buttered the donut pans with melted butter and set them aside. Don’t have donut pans? Stay tuned . . . 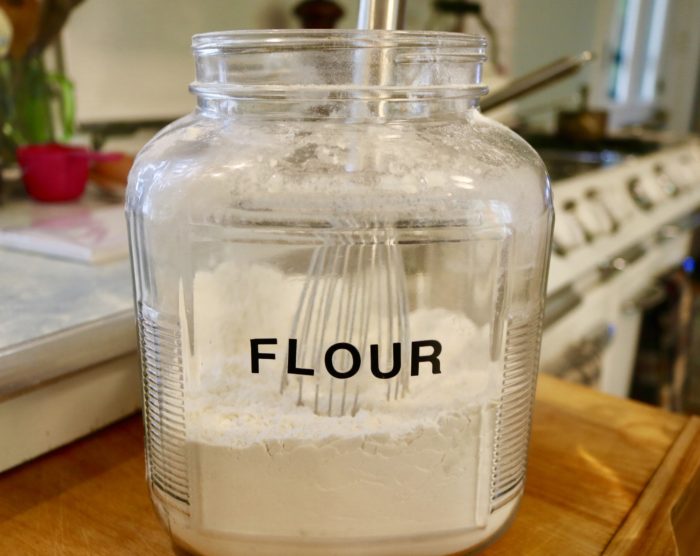 I lightened the flour by stirring it with a whisk so I wouldn’t have to sift it. Then I measured it out lightly and put it in a medium bowl . . . 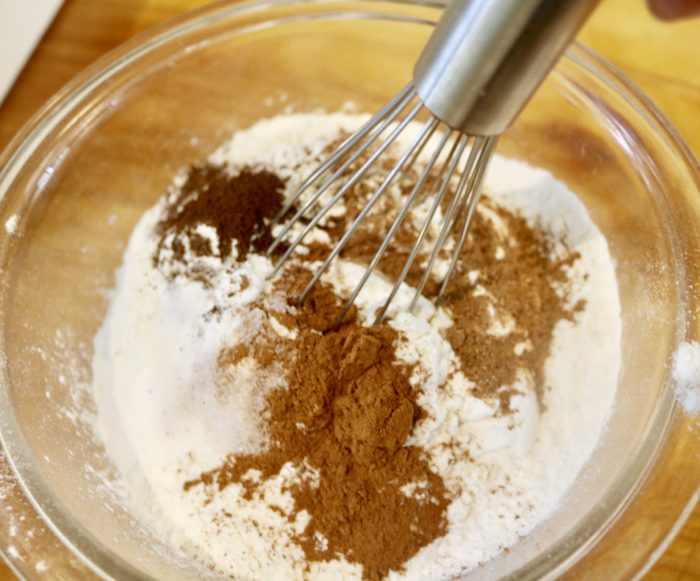 and whisked it together with baking powder, baking soda, nutmeg, cinnamon, cloves, and salt. 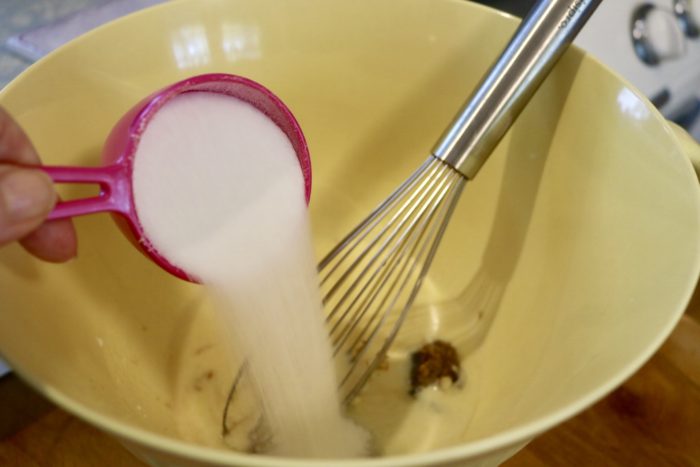 In another large bowl, I whisked together egg, milk, vanilla, brown sugar, and granulated sugar. 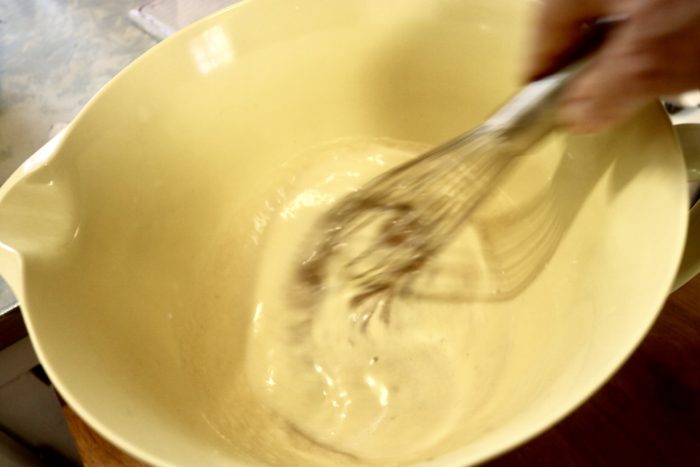 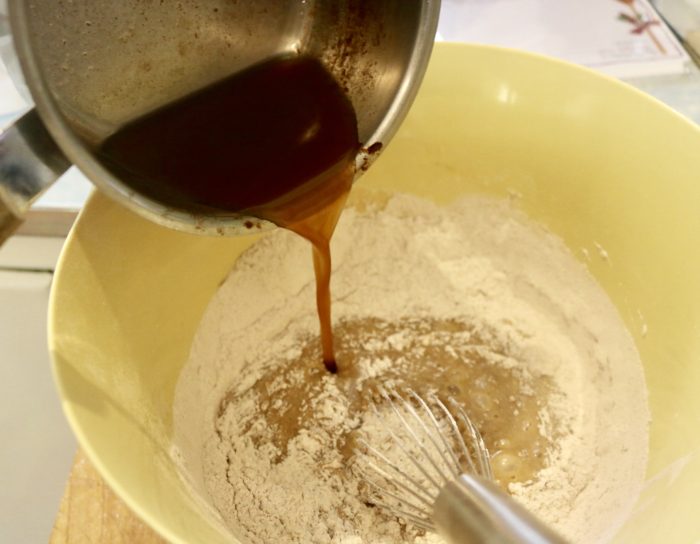 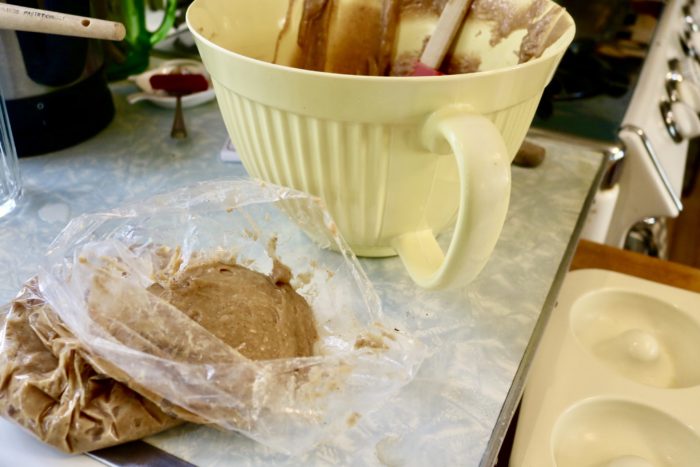 Then, because it’s too difficult to get the dough neatly into the tiny donut pans with a spoon, I poured the batter into a plastic bag … 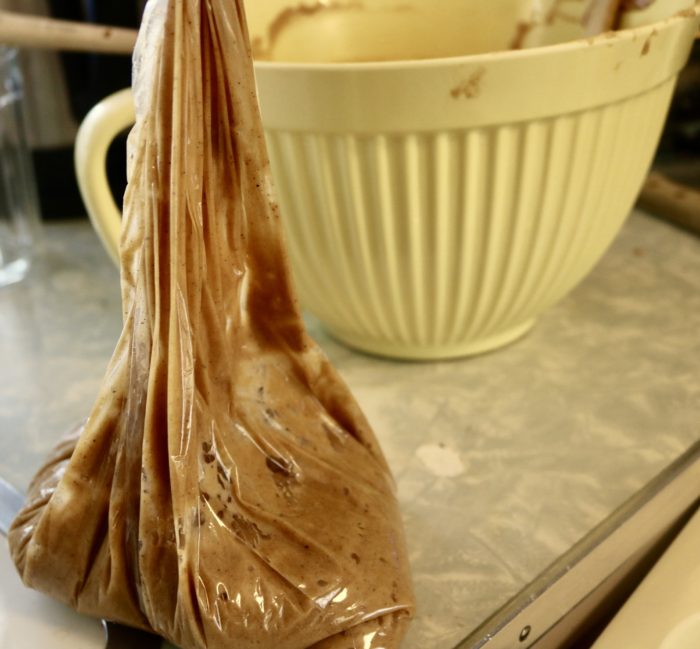 . . . then squeezed the messy thing down to get most of the batter in the bottom of the bag, 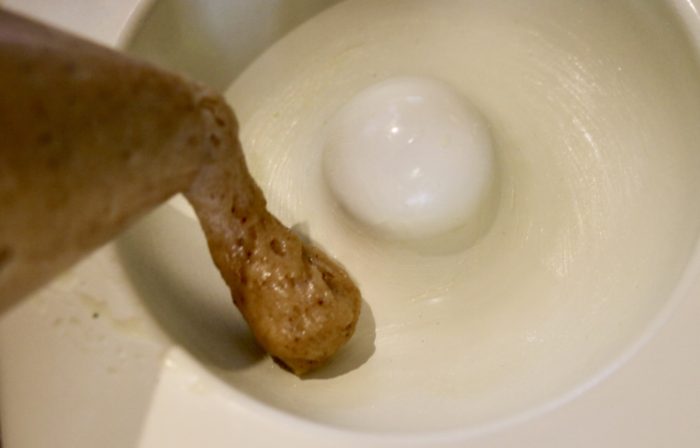 then I twisted it up at the top, and cut off a tiny bit of corner, so the batter would come out in a controllable manner. 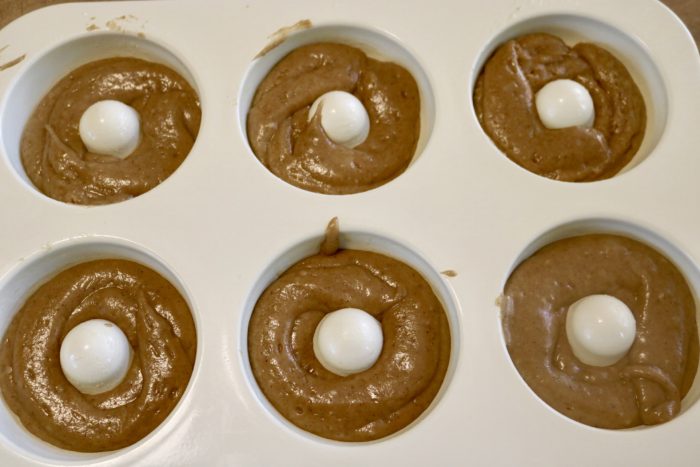 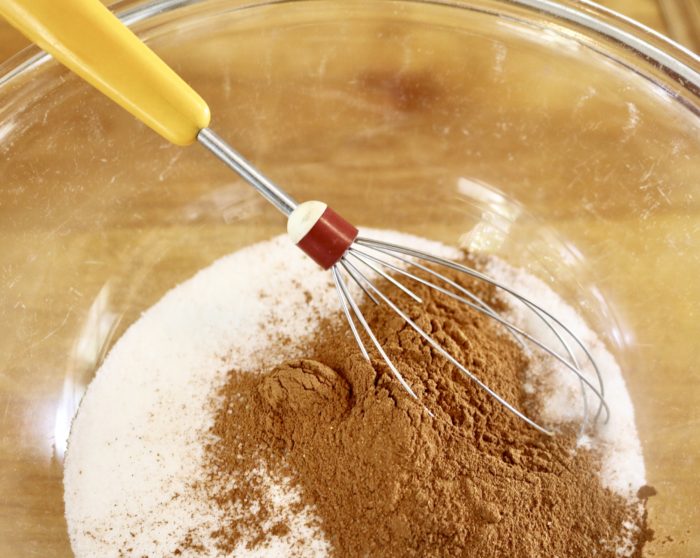 While they baked, I melted some butter and mixed together sugar, pumpkin pie spice, and cinnamon for coating the donuts when they were done. 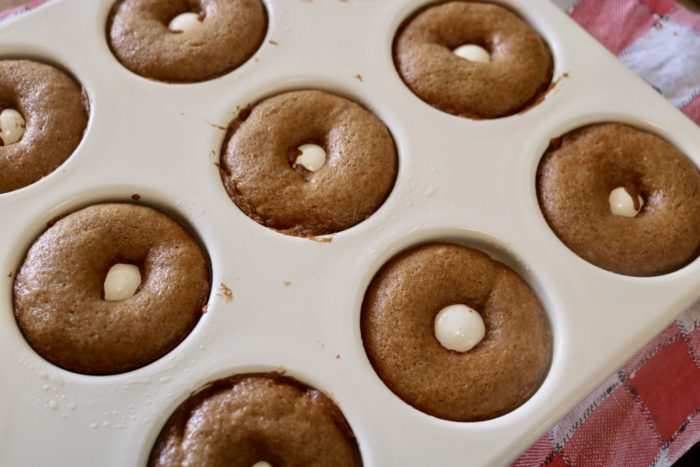 And here they are, hot from the oven. I slipped a tiny spatula around them and they came out like buttah. 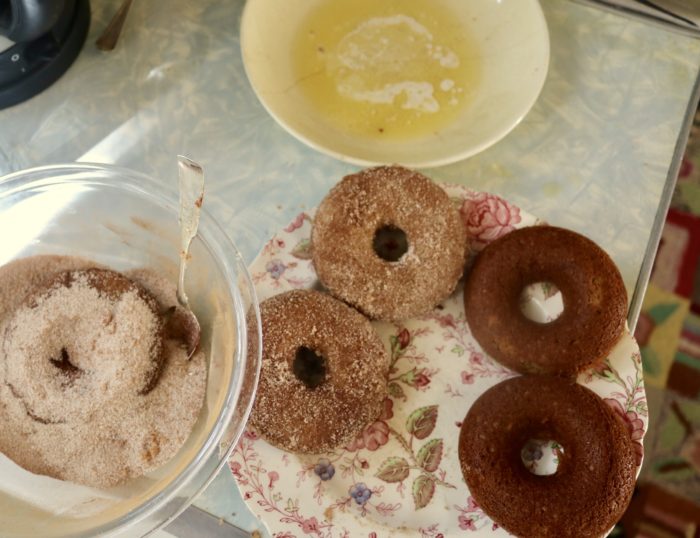 I dipped them, tops and bottoms in melted butter, and laid them into bowl with the sugar and spice . . . 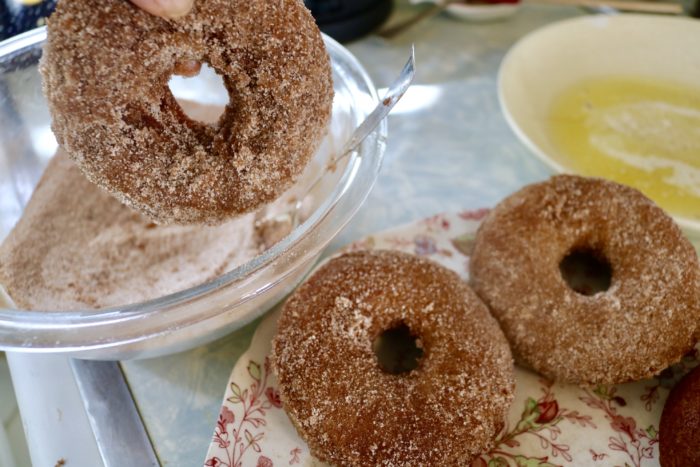 Spooned over sugar, pressed it in, until they were well coated. Pushing Joe, get away. no touching. Oh, poor baby, okay, eat one. Gimmie a bite.💋 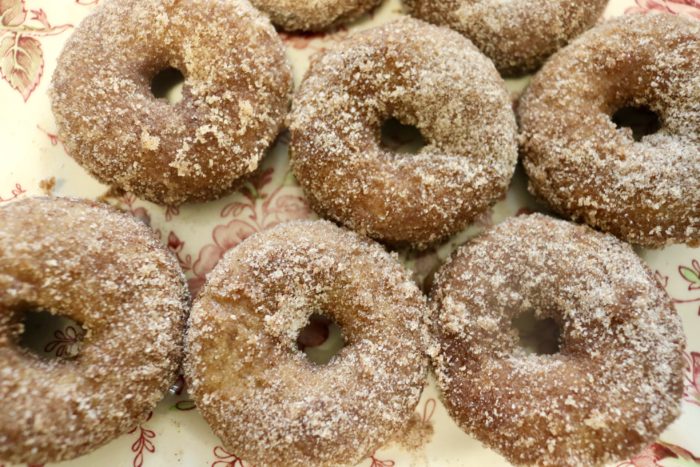 I wrapped the rest of them in an old linen bridge-table tablecloth, put them in a basket and walked over to Lowely’s for Mahjong. 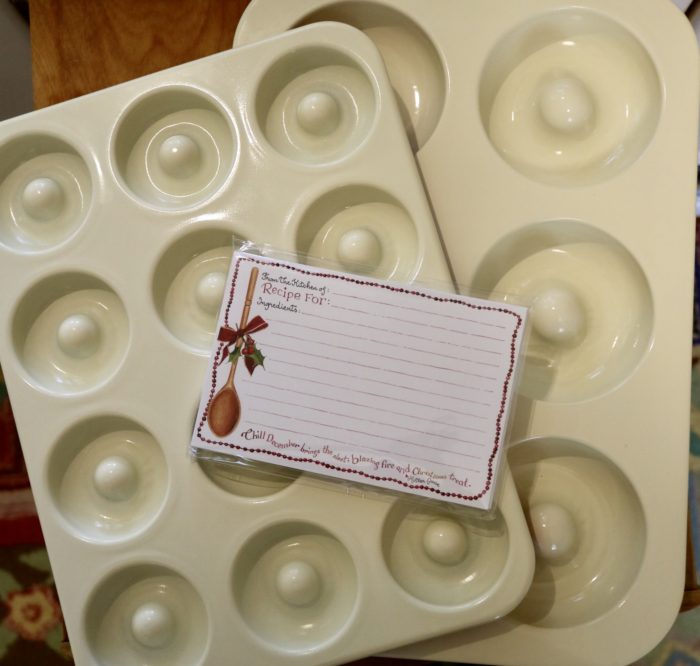 Set out 1/2 c. whole milk and one egg to come to room temp. Slowly melt 1 1/2 c. (12 TB. or 1 1/2 sticks) butter (you’ll ned some to grease the pans, some for donut batter, and some for the topping). Put 1 1/2 c. non-alcoholic apple cider in small saucepan. Bring to boil, then simmer until liquid reduces to one-half cup. 👀 Watch it. Takes about 15 min. Set aside to cool. Use a pastry brush, butter the donut cups.

Preheat oven to 350º. In a med bowl, whisk together first 7 ingredients. Set aside. In large bowl, whisk the egg, then whisk in the rest of the ingredients. Add dry ingredients to wet and whisk until smooth. Fill a large plastic bag with batter. This is messy. Once filled, hold it at top and squeeze batter down, twist the top so batter is pushed into bottom. With scissors cut a tiny corner off the bottom of the bag (not too much, you can always cut it bigger). Squeeze the batter into the donut cavities, filling about 2/3 full. Bake 10-12 min until they spring back when you poke them (I baked the small donuts slightly less time). Let cool 5 min in pans, Use a small spatula to loosen each one and turn them out onto tea-towel-covered cooling rack. While they are baking, make TOPPING: in a small bowl, mix together first 3 topping ingredients. Put the rest of the melted butter in a shallow dish. When donuts are cool enough to handle, dip tops and bottoms in melted butter, put them in the sugar mixture and spoon over generously, patting them so the mixture will hold on. Eat! Lovely in a cloth covered basket to bring to tea! Excellent with a cup of coffee!

*You can make your own PUMPKIN PIE SPICE for the topping, just add 1/2 tsp.nutmeg, 1/4 tsp.ground ginger,  and 1/4 tsp. ground cloves to the cinnamon.