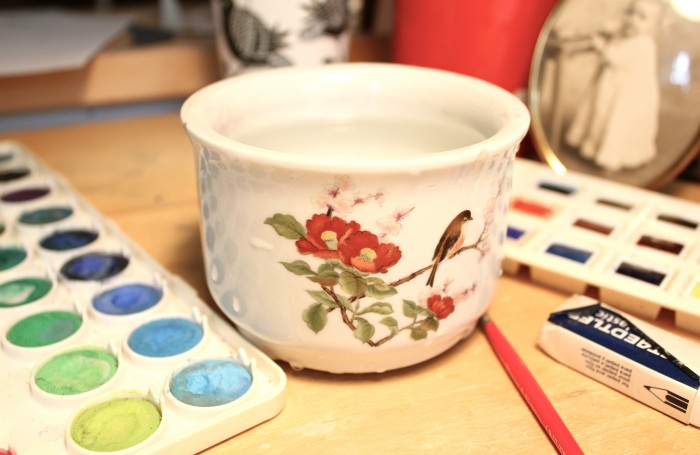 See this pot? I got it at Disneyland in California about two weeks before I painted my first painting. If you saw it on Ebay you wouldn’t give it a second look. I don’t know why I bought it or what I planned to use it for; I think I just loved the bird, but it has held the water for my watercolors since day one.  I’ve filled it at the kitchen sink, carried it through the “wood room” (creatively called that because the walls are wood), through the living room, and into my studio before the sun has come up, day after day, for years. Just a woman and her water pot. 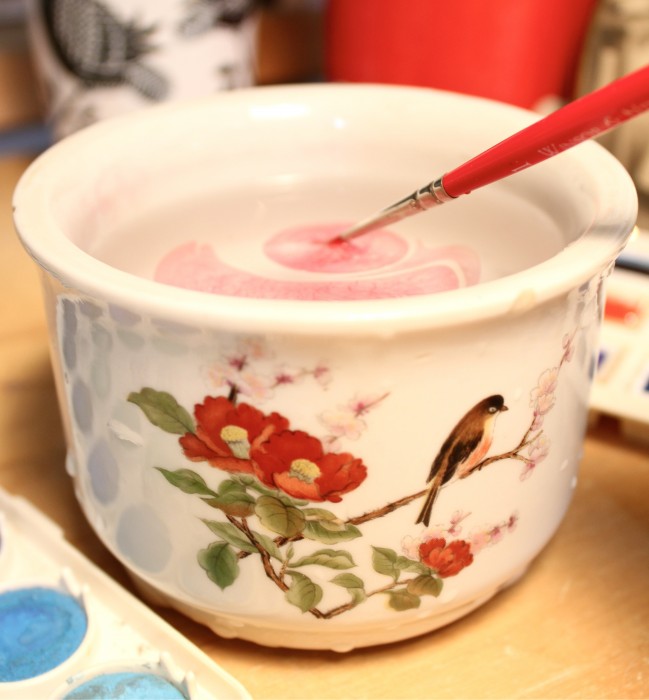 I‘ve dipped my brush into it a zillion times.  My cat loves it too, she wants to drink my water, but she’s not allowed to unless I’ve put clean water in it…which I do constantly, for her. Since I’ve never been quite sure where this ability to paint has come from (sort of out of the blue you know, when I was thirty instead of when I was eight) … I’ve given some credit to this pot which I like to imagine might have a speck of Disney magic connected to it. ♥

Why not? For all I know Tinkerbell waved some fairy dust over it.  No telling how long that pot sat on a shelf in a “Main Street” store in Disneyland before I got it.  Could have happened. And two generations of kitty lapping can’t hurt either, for magic.  You use something long enough and it becomes rather a treasure to you…an odd, valueless treasure, that you wouldn’t part with for anything.  I also have a spoon that belonged to my Grandma, just a regular wooden spoon she used for making cookies.  Another treasure.  Infused with magic.  I know you know what I mean. ♥

This entry was posted in Blog and tagged Disney, grandma, magic, watercolors. Bookmark the permalink.