Storm of the Century

The crickets don’t seem to know we’re in the path of a hurricane.  They’re in fine form, chirping away outside my studio window at pre-dawn.  Girl Kitty is calm, sleepy on her pillow, no running in circles (yet).  It’s hard to believe what is apparently (very apparent on all TV stations) lurking down south. 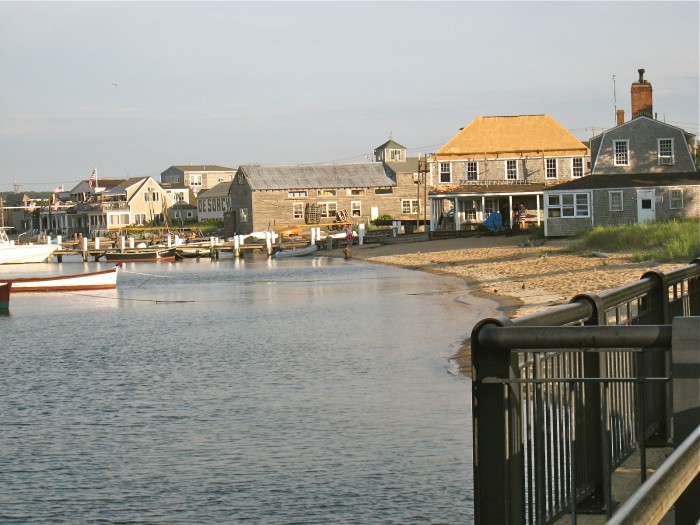 We are very much water-based on Martha’s Vineyard. This is the harbor, three blocks from my house, normally beautiful and tranquil; now it would be called “living on the edge.”  The words being used to describe this storm are frightening: weather people are giving us “Tips for Survival,” (Survival, couldn’t they just say “safety?”) — talking about: Devastation and Massive Tree Damage. We should “Develop a Plan for a Week Without Electricity,” they offer Live Team Coverage, Unprecedented Coverage of Historic Proportions; because it’s a Disaster, there will be Toppling and Crushed Cell-Phone Towers (they say, “Keep your cell phone sealed in a plastic bag!”); 2.5 Million People Under Evacuation Orders; NY City evacuating for first time in history!!!  Surging, Flooding, Bashing, Storm of the Century, remove all Projectiles from your yard!  Any minute they’ll announce Godzilla is in NY and heading for the island. They’re scaring my parents who’re calling me from out west. Twitter friends are worried about us. 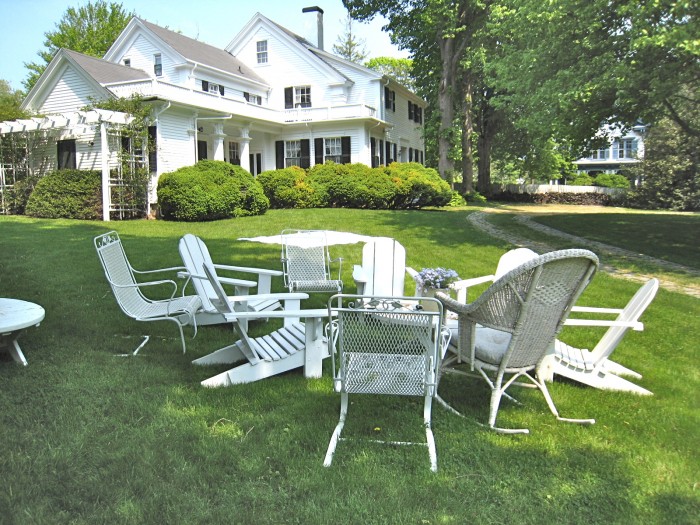 An Adirondack chair is now considered a Projectile.  Joe moved them all into the barn yesterday…. see those three trees next to the house?  They don’t look so big in the picture, but they’re over a 100 years old, HUGE, and 6′ from house.  We clearly do not stand a chance here, on this little blip of an island, out in the ocean.  While I listen intently, try and get Joe’s attention to discuss the situation, he acts like nothing is happening. He thinks the media is so madly in love with itself it has started manufacturing hurricanes.  I’m forced to be stern with him in order to get him to put the projectiles away, to watch the TV with me.  He will be having his hurricane on the end of that wharf in the first photo … who is crazy, him, or me? I don’t like my choices, either I’m a cynic, a lemming, or an idiot.  I choose lemming.  Out I go to do away with more projectiles…These must go… 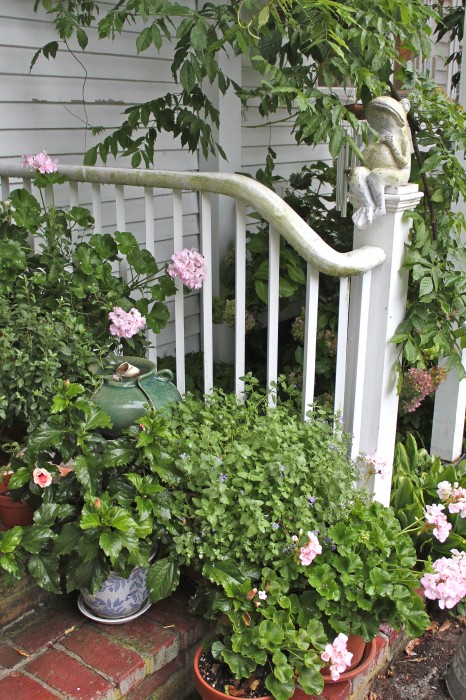 Of course they must, especially that frog, everything comes in to the pantry until this is over.

Although I can’t bring myself to put my cell phone in a plastic bag, we are ready. In case of power loss, we have a gas stove, (we can cook, no going without tea); the fridge is full of food and ice; I made a big chicken salad; we have ice cream, we have chocolate sauce; we have candles; we have Rummikub; we have wine (probably the number one ingredient for a hurricane, but they never mention THAT on the TV); we’re on town water, so we’ll have water; our house is on a hill so flooding shouldn’t be happening here. Didn’t bother to fill car tanks with gas; there’s no place to go.  But batteries on phone and computer are revved.  Most important, the cameras both have full batteries in them!  We won’t miss a thing.

This just in:  Dr. Nab, Hurricane Expert, says, “Well, it’s been downgraded, it’s a weaker storm than I thought, not as big as expected.” He sounds so sad and deflated, I almost feel bad for him.

130 Responses to Storm of the Century