I have news.  It goes with Musica. 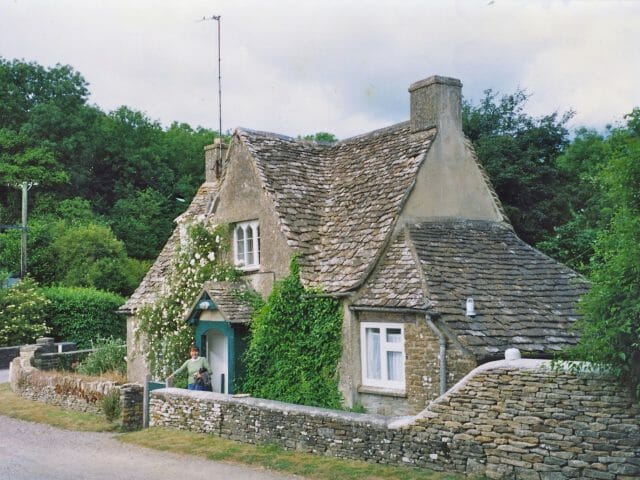 My news has something to do with this enchanting little English cottage.  But first we have to get into the way-back machine.  Are you in?  Comfy?  OK, here goes:

Twenty-six-ish years ago, I was sitting on a red leather stool, talking to my girlfriend, at a clam bar in a wonderful restaurant here on the island (gone now) called the Ocean Club.  I sat at the bar, across from an aproned bartender who was shucking oysters, placing them on a plate of crushed ice, in front of a huge gilt-edged mirror that went to the ceiling, reflecting tall open windows that went all the way around the room.  I was wearing a long, narrow, pin-striped skirt with a wide leather belt, high-heeled boots, and a white linen, high-collared shirt.  I know what I was wearing because the person I met that night remembers; he’s one of two guys who sat down on the empty stools next to us.  I leaned past the tall one to say hello to the one I already knew; he said hello and, over restaurant clatter of silverware, conversation, and music, he introduced me to the stranger. 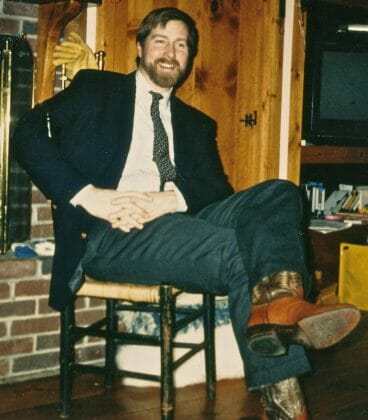 His name was Joe. We were sitting almost shoulder to shoulder and were rather instantly simpatico; he seemed to be a very nice person.

For a little background, this pleasant encounter took place at about the same time I had decided I was finished with men forever. My heart had become so tattered by life; a sad divorce that left me feeling identity free and minus any personality; and then, from years of trying to find love again in all the wrong places; I had finally given up.  It was all just too fraught with danger.  No more, I said to the wall in my kitchen, toasting myself with my teacup in the reflection of my kitchen window.  It wasn’t the way I’d thought my life would go; but obviously I was meant to be alone.  I’d come to terms with it.  I had a tiny little house in the woods with a wonderful garden where wild blueberries grew; I was painting a cookbook; it almost substituted for love.

Joe seemed nice, he was very friendly; it wasn’t long, that first night, before he was feeding me from his plate, which is what he does.  He seemed harmless too.  He was five years younger than me for one thing.  A baby.  A very cute, tall, baby, but still, a baby.  Even though I had been told by two different forseers of the future, a palm reader and an astrologist, that I was going to fall in love with a tall man with a beard; I did not recognize him.  I discounted what they said because I was not a beard person.  Even though, years before, I had asked my diary for a 6’2″ Leo who could cook and even though Joe told me he was a Leo and he ran a restaurant and cooked there, still, I did not recognize him. 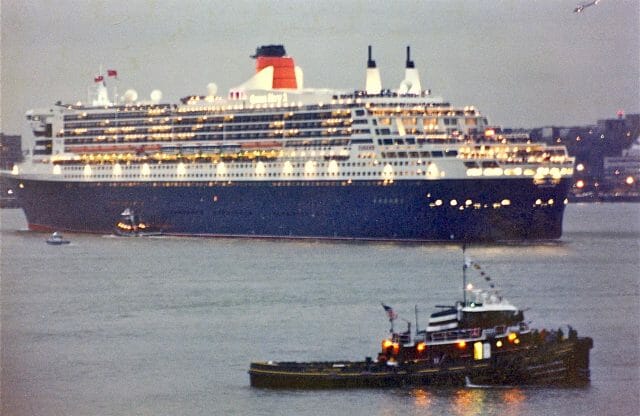 Our conversation, that night, went everywhere.  I learned that he loved Fred Astaire, (have I told you that I love Fred Astaire?  I do!!) which was unheard of in any of my relationships with any men ever, they didn’t even know who he was.  Joe had Fred Astaire albums!  He’d sailed on a ship to England with his mother when he was twelve.  I dreamed all my life of sailing to England!  All the Fred Astaire movies had such things in them. We talked about that a lot.  The conversation was fun, but he was still too young for me; I had completely convinced myself there was never going to be any more love in my life; I felt secure because of it, my heart was now safe, protected from the ravages of caring about someone too much.  It was another five months before Joe and I had our first date.  Even then, I was surprised he asked me out, and almost didn’t go.  Then I thought, he’s a nice kid, he comes from a big family, he cooks, I have nothing else to do, it’s winter, OK; I’ll go.  I thought these were probably the same reasons he asked me out!  Nothing else to do. Just a friend.  Blah blah blah. 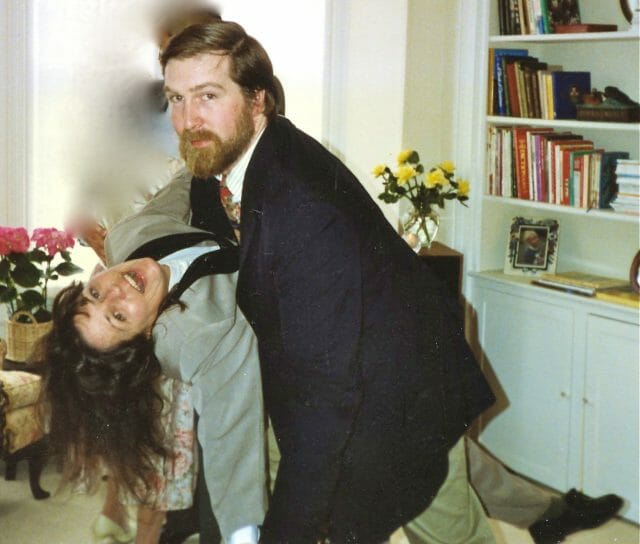 Luckily, that isn’t at all what he thought, and pretty soon, neither did I.

Which brings me to my news.  It’s almost my birthday.  Joe and I had our 25th anniversary in February.  That’s when Joe said, dreamily, “Let’s go back to England for your birthday.”  No!  Silence.  Can we?  More silence.  Thinking noises, ticking of clock, sleeping on it.   We’ve been trying this idea on for size ever since, mulling it over; doing the pros and cons.  There are big cons: we absolutely should not go. 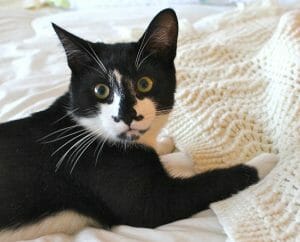 We have kitties; our newest kitten is only eight months old; how can we leave them?  It will kill me.

I have to finish my Breakfast Book!

It’s too expensive, we shouldn’t be spending money right now.

If we go anywhere, it should be to see my parents, I miss them!

BUT, we thought pragmatically: we are healthy, my parents are healthy, the kitties are healthy and life is short.  Maybe next year my knees will give out, or Joe’s back, or Girl Kitty will get sick; something could happen.  We should go now, and go out west afterwards.

So, we are.  We called the Kitty Babysitter and asked what he was doing from May through July; he said he would love to come live in our house; he promised big love and ball-throwing for the kitties; so Joe bought the tickets at Cunard last week. 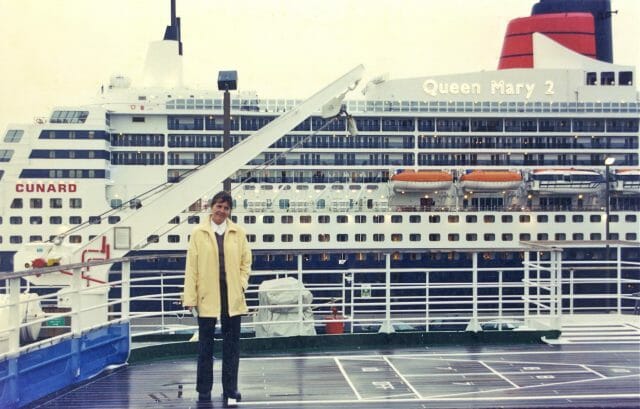 This is me on the last trip we took to England in 2004; we dreamed, saved, and planned for this trip since the day we met.  I look calm, but inside, every fiber of my being is jumping for joy because I’m standing on the deck of the QEII (which has since been retired).  We are about to sail down the Hudson, past all the twinkly-lit-up buildings of New York City; that’s the Queen Mary 2 in the berth next to us.  And come this May, we’re doing it again, for two months, from New York to Southampton, this time on the Queen Mary.  We have unfinished dreams to fulfill in England.  I haven’t been to Beatrix Potter’s house in the Lake District!  I want to fill my inspiration cup; to see all the gardens we missed the first time, to visit loved ones over there.  It’s been a long time since we took a vacation, all we seem to do is work. We need a moment to meander with no particular place to go!

For example, look at this place we found sitting on the side of the road last time.  We pulled in, drawn like magnets; stayed the night, had tea, then a room-service breakfast on a tray, propped on feather pillows in the flowery wallpapered, high-ceilinged room; afterwards we wandered through the garden listening to the bees . . . it was all serendipity, an accident.  If I saw a picture like this, I would think it wasn’t real.  But it’s real all right, just sitting over there, in clear view of anyone passing by.

Einstein said, “Creativity is the residue of time wasted.” We need some of that residue. 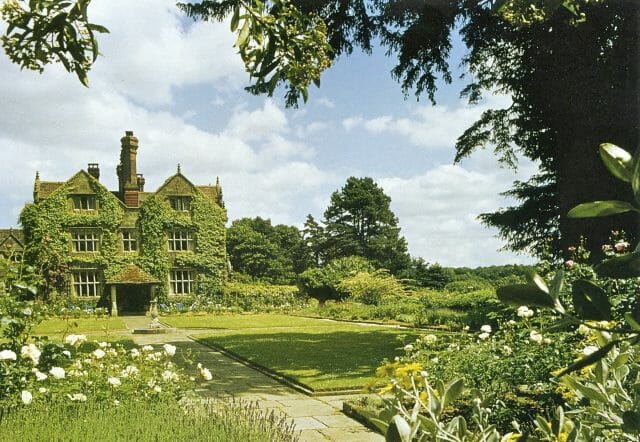 I’m not going to tell you where we are going this time, because I want you to be surprised.  Yes, we talked it over and we thought we’d take you with us! Through the magic of the internet, a travel blog!  Maybe you’d like a little arm-chair view of the Atlantic Ocean over the ship’s rail?  Thought you’d enjoy seeing the English tea they serve everyday at four o’clock on board the ship?  Hoping you’ll like old houses and walking through very old and gorgeous English gardens (the bluebells will be in bloom!); and enjoy pictures of pub food, and probably pictures of English dogs and kitties; maybe some of you would like to go to the Lake District for a visit to Beatrix Potter’s house too?  Maybe even a weekend in London? Joe’s been working it out so we’ll have as much wireless service as possible (there will be places where there isn’t any; it’s going to be spotty, but I’ll do the best I can to update the blog with photos and video).  Our only real drawback is not being able to send fragrance through the internet.  The sea, the gardens.  But oh well; the Flower moon will be full the day after we sail; I checked.  Moon over the water.  Oooo la weee. 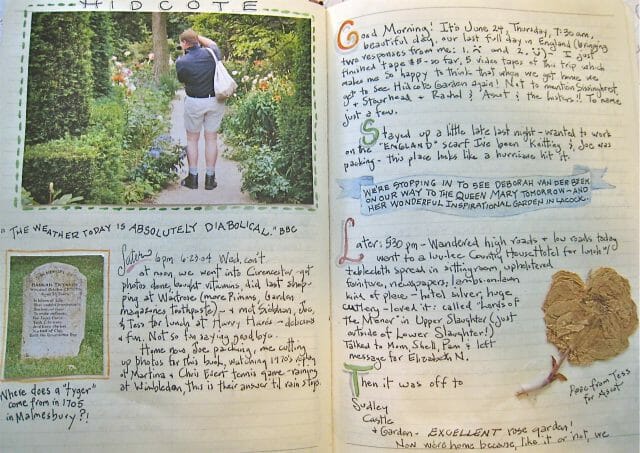 Remember this diary I kept on our 2004 trip?  To make up for the fact that the Breakfast Book is going to be late, I thought I’d keep another diary this time, sort of like it, only cuter; one that will go to print and be published just as soon as we get back.  In it, along with photos, watercolor drawings, recipes, garden views, and stories of this trip, I thought I’d tell the whole saga of meeting Joe, our first date, and how we decided to throw our lot together and try to make a go of it, since without him, who knows if this dream could have ever come true.

Now. Dream. Part II, the sequel.♥ The countdown has begun. 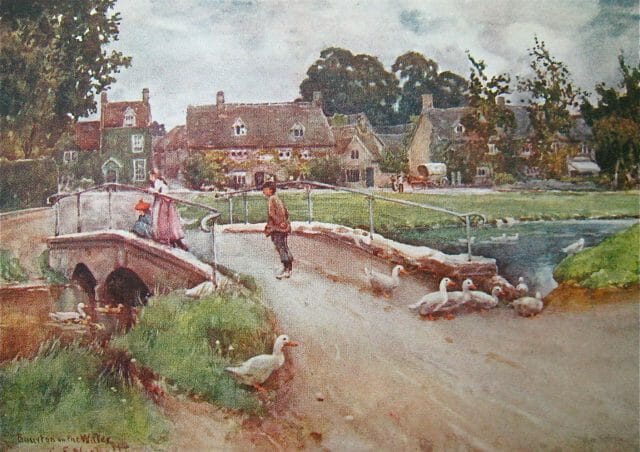 Join us, on the other side of the bridge . . . for this story is proof that somewhere over the rainbow, skies are blue, and the dreams that you dare to dream, really DO come true.  XOXO 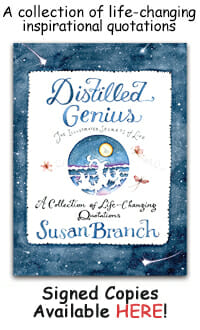 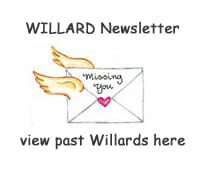