A STORY OF CHRISTMAS PAST

As many of you know (and some may not), I’m the oldest of eight children; after me there were four boys and then three girls. I got a new baby almost every two years for the whole time I lived at home which I thought was just wonderful of my parents to supply me with an unending supply of new Betsy Wetsy type dolls to dress and play with. The picture below is only missing our last baby girl, but she was on her way!  Christmas was hugely exciting at our house~ 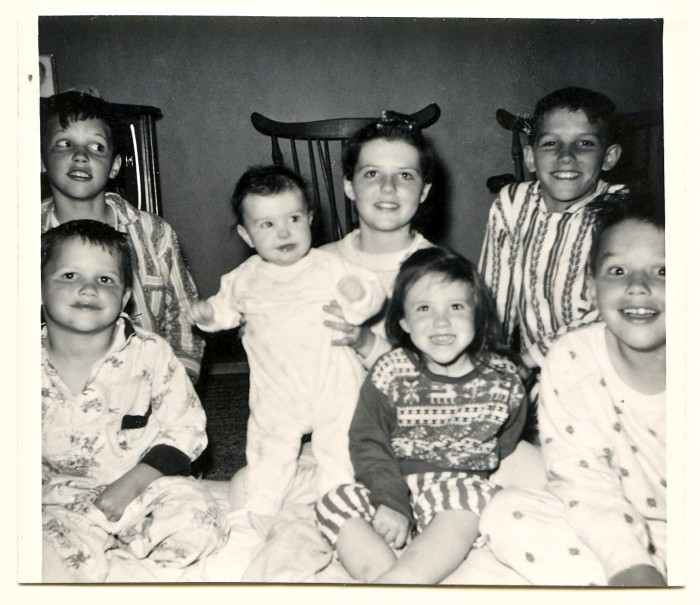 with visits to Santa Claus, cookies baking, parents whispering and (quite rudely) talking in arf and arfy at the dinner table (the secret-code language my mom learned from the funny papers 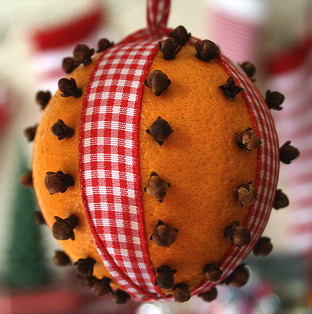 wen she was a kid), odd-shaped boxes appearing on the high shelves in the closets (oh yes, we children notice things like that), school and church events, making gifts for my family at Girl Scouts (construction-paper crowns and oranges-studded-with-cloves pomanders), decorating the tree, going caroling in the cold air bundled up under Christmas lights, hanging the soon-to-be-filled to the brim stockings by the fireplace . . . the anticipation was excruciating ~ maybe not for everyone, but definitely for me ~ waiting for Christmas morning was 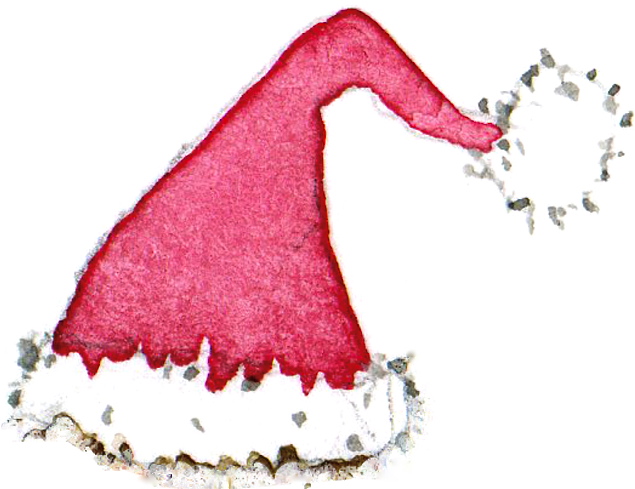 almost unbearable and Christmas Eve itself put me very close to the breaking point. Especially when my grandma showed up with her car filled with gifts, wrapped in glittering stripes and stars with Santas and snowmen, red and green, little and big, fat and skinny, shiny with ribbons and bows, and so many secrets.  Discussions with my dad at the dinner table as he innocently wondered out loud about where Santa might be at the moment, or what he might do if he got stuck in our chimney did not lessen the delirium.  I learned subconsciously from him and tried to heighten the hysteria in my siblings to the level I felt by running around outside the house shaking jingle bells at the windows. “Did you hear that?  He’s out there!!!!!” I said to 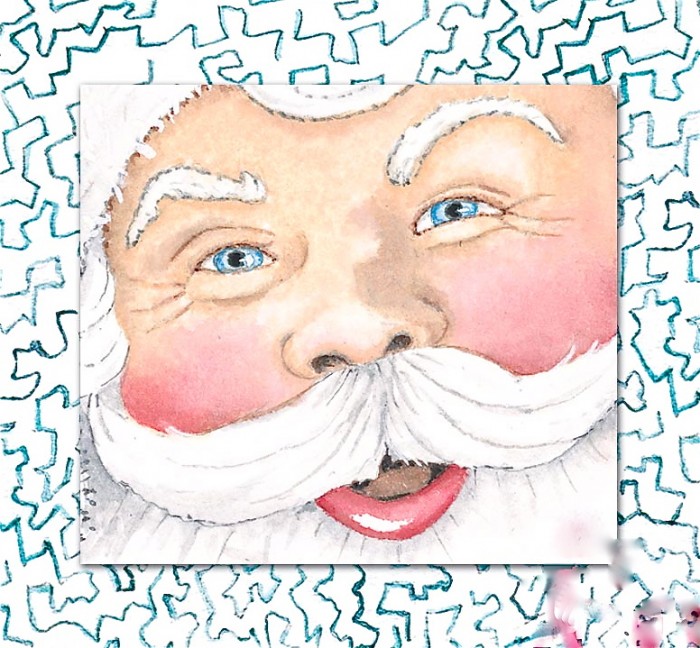 my wide-eyed victims. Frenzy was the name of the game.  I almost always cried. What we kids needed before bed on Christmas Eve was bourbon on the rocks but drinking alcohol for children was frowned upon in our family.  Instead they gave us hot chocolate with miniature marshmallows to help us sleep.  Milk Schmilk. We were far beyond help. Two of my brothers, in their cowboy flannel jammies slept sitting up under a blanket in the same green-flowered barkcloth covered chair in their bedroom on Christmas Eve with Nipper our dog between them.  We have pictures.  Made perfect sense to me. Somehow this put them closer to the action. Lucky them.

My grandma slept with me on Christmas Eve. This was extremely inconvenient as you can imagine. For as much as I loved her, which was to the moon and back, I had only one thing on my mind between 4 and 6 am on Christmas morning and that was getting out of that bed and in to the living room to see what Santa had brought.  But in order to do it I had to get past her.  Sharp as a tack and quick as a bunny she was, in her prime and ready for action, it was not going to be easy.

Early one Christmas morning, eyes wide open in the dark bedroom, listening to the house asleep and creaking, I decided I would really try this time.  I would be scientific and patient.  I would not hurry childishly.  I would think calmly.  It felt like it took hours. Inching my way and barely breathing, I rolled onto my belly in what I thought was a “common sleep pattern of activity” and waited. Nothing. No response.  She was asleep, purring deeply.  I continued.  First a flannel-covered leg over the side of the bed, dangling barefoot in the air, then an arm, then the tiniest movements to get the middle of my body out ~ it was going extremely well, I was doing it!  The only thing I could hear was my heart beating.  All the bedrooms of our geranium-colored house were filled with sleeping souls and every house in our neighborhood was dark, I 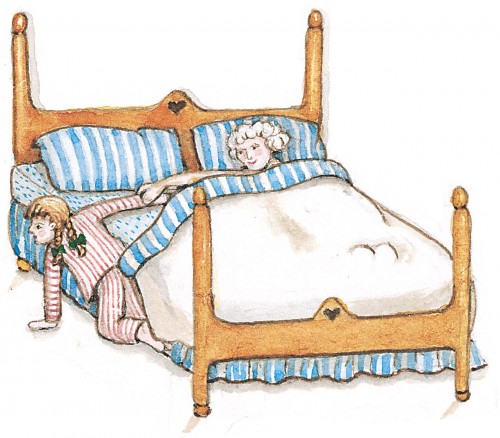 was the only one awake in the world. Just me and Santa and our date with destiny. I could do this.  Extra carefully I slid out another leg thereby dragging myself over the edge of the bed, nose and lips smooshing against sheets as I went.  This put me on the floor, on my knees and one hand, next to the bed, with only one arm to bring across the sheets to freedom. I had it made in the shade.  Slowly I began to pull my arm toward me and then, after all that, at the last possible moment, my grandma, quick as a jack-in-the-box lighting bolt with a hand on the end of it, reached out, grabbed my arm and said in a shockingly low and unexpected voice, “Where do you think you’re going?” 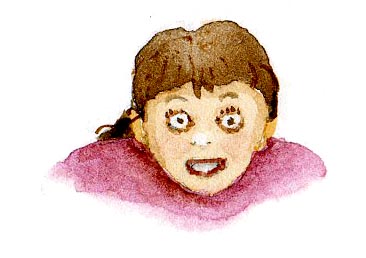 Yeeeeiiiikkkkss.  She scared me to death.  And that was the end of that. Foiled again. My grandma was awake even when she was asleep, she could see through eyelids. I didn’t even try to beg my way out.  It was pure dark in the room with only a sliver of moon peeping through the windows as I crawled back into bed returned to my lonely cell KNOWING that Santa magic had gone on in the living room such a very few steps away across the wool carpet of many colors but I could not get to it.  Woe was me.  She wanted me to wait for dawn and not wake my uncles who were sleeping on the couches.  Fortunately my little brothers and sisters were home free, no Grandma in their beds, and it wasn’t long till the tip-toe of little muk luks was heard scurrying down the hall and I was set free!  Free at Last. Let the party begin! And yes, we did live happily ever after, at least until the next Christmas Eve which I didn’t really have to worry about because I knew it  would take forever to arrive. 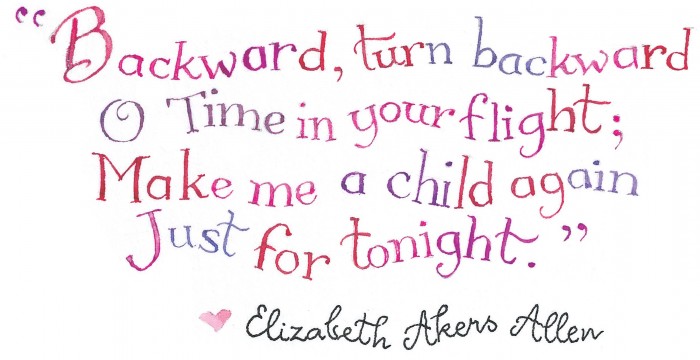 Merry Christmas Girlfriends, tell someone a Christmas story tonight.  Little ones love it but so do big ones.  May visions of sugarplums dance in your heads this night of nights.  We’ll do our drawing on the 26th (I’m still wrapping the consolation prizes, that’s a whole lotta ribbon!) … If you haven’t signed up for our Christmas Giveaway, scroll down to read further and join the fun.

My prayer for you:

Ah friends, dear friends, as years go on and heads get gray, how fast the guests do go.  Touch hands, touch hands, with those that stay ~ strong hands to weak, old hands to young, around the Christmas board touch hands.  ♥ We are so lucky to have each other ♥ 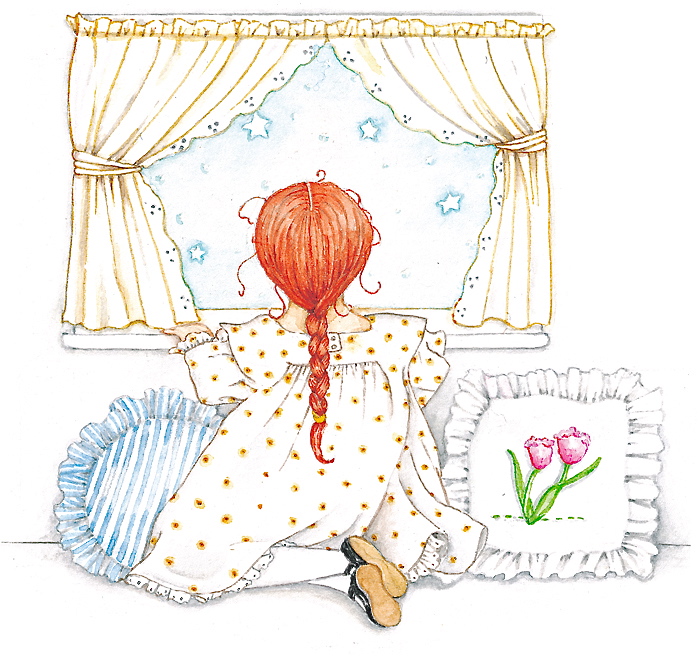 336 Responses to A STORY OF CHRISTMAS PAST