There’s an article about how I started writing books in the August issue of Where Women Create Magazine that has this →  in it; lately I’m getting mail asking  how this card came to be, so I thought it would be a good thing to write about.

When I was writing my first book, I had no idea what I was doing.  I didn’t really expect it to get published; I hoped, but didn’t expect because of the not knowing what I was doing and the fact that book writers I knew about, and me, seemed to have so little in common. They were geniuses and I was just a sad girl (brokenhearted from divorce) alone in a house. But you can tell by this card, I really wanted to write a book and “create future.”

Once I decided to really try, I got so excited about the pages I was painting, it became my dawn-til-dusk obsession. I woke up early, flipped on the TV in the still-dark house, started the water boiling for tea, fed the kitties, and went directly to the watercolors, eager to put onto paper what I’d dreamed the night before.  I began to ignore all other aspects of my life.  I forgot to get out of my jammies.  I opened the fridge and whatever food was there, I ate it, standing up, in refrigerator-bulb light, wiping chicken-leg grease off my hands quickly before racing back to the dining room table (subbing for art table) where my entire life was focused. I could get away with this because I lived alone in my little house; I had recently moved to Martha’s Vineyard from California and didn’t know anyone.  So, I was safe from someone coming by who might judge me because my hair was glued to my head from not being washed. I had made up a little fable, about me, and butterfly wings.  That creativity was coming to me at night, and it could be washed off in the shower, the magic disappearing like what happens if you take off the powder on a butterfly’s wings.  So, yes, I was on the verge of being a disgustingly dirty butterfly. 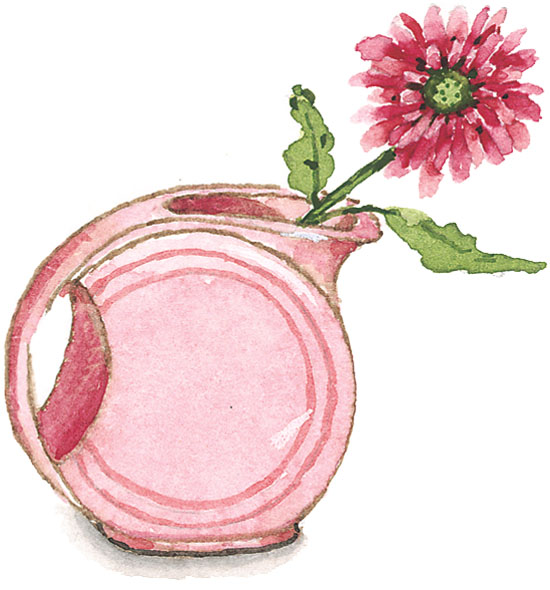 I kept talking to myself saying where’s the balance, and then went right on being obsessed.  Although I was loving the painting, I felt guilty about being so ridiculous about it. I knew what I should do, I was just forgetting to do it and it was making me weary.

So I painted this card to keep myself on the straight and narrow (you can tell it was a long time ago; it was originally on white paper!).  I propped it up on my art table and read it every morning.  It was a big help to keep me focused. It was my first How to be Happy list, but not the last.  My diaries are peppered with them.  Later on, I made a “focus card” especially for each book I was doing.  Things got much better; I took bubble baths, went for long walks down to the water every day, took my vitamins, and remembered to try to channel the true-heart of Mark Twain. ♥

I took my How to be Happy list out of my diaries and out of the house for the first time when I put one of them in my 1999 calendar.  Life still gets crowded with too many wonderful things to do and I still need to be reminded how important it is to take time to dream. ♥

This entry was posted in Blog and tagged art, balance, butterfly wings, dreams, how to be happy, keeping focused, painting, writing books. Bookmark the permalink.