What to give the girls today?  First a song . . . Come and get your Happiness . . . click here for a little bit of heaven, and come back to be serenaded while you read the rest of this.

I thought we might need a time-out from the Travel Log because we just passed a milestone, it’s really Fall now, even our calendar agrees — and it was raining here, soaking everything when we got off the train yesterday in Sunny California!  At my mom’s last night, I happened upon a recognizable calendar on her kitchen wall and was reminded of this: 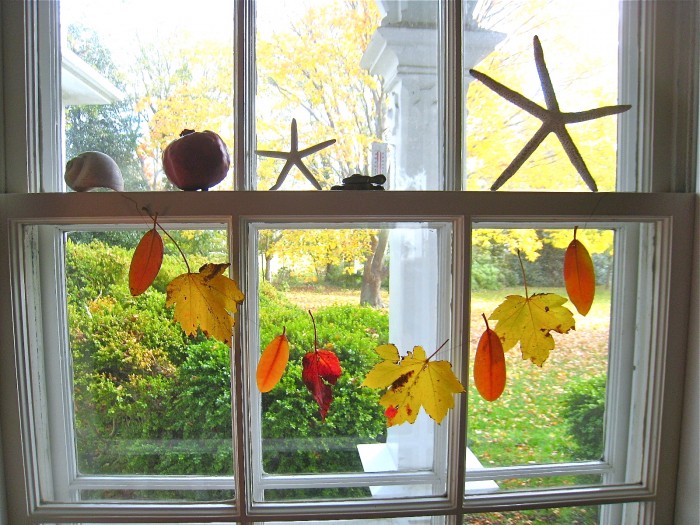 The other day one of our brilliant girlfriends wrote us with such a good idea about this leaf garland; instead of threading the leaves with a needle, she hangs a piece of yarn or twine in her window, and uses clothespins to hold the leaves; easier to replace as they wither!  I have a box of miniature clothespins I found at Michael’s, so I’ll try it when I get home. I like the thread because it’s almost invisible, but the clothespins might even be cuter!

Even before we left the island, the first little nip of fall was in the air, and I knew it would be progressing right along while I was out and kitchenless, so I cooked up a few treats, recipes I wanted to show you before Autumn slips through our fingers, whether I was traveling or not!  So, here’s the first one, delicious, tummy warming, fall-catching Corn Chowder . . . come and get your happiness! ♥ 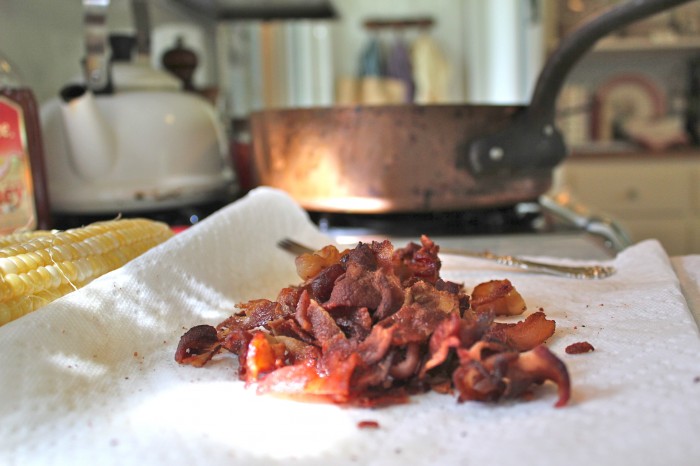 First I cooked 8 slices of thick-cut bacon in a large heavy pan, s l o w l y, until it was very crisp, drained it on paper towels.  Cut it into 1″ pieces with scissors, and set it aside (hide it from yourself, cover it with a paper towel, you know you ♥). 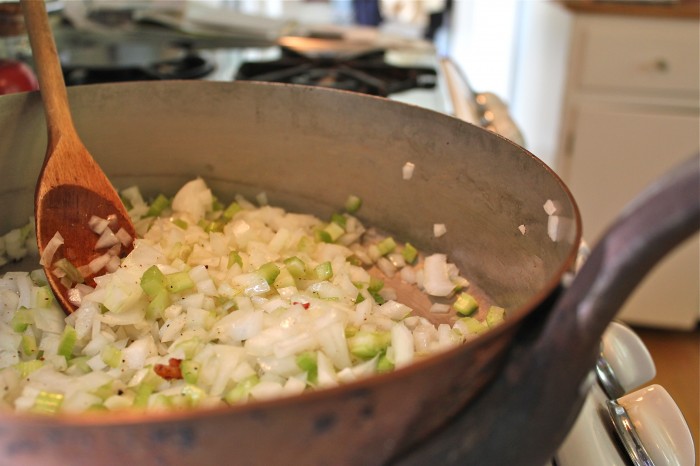 Pour off most of the bacon fat, then saute chopped onion and celery in the same pan, scraping up all that bacon goodness, until the veggies are softened, about 10 minutes.  While that’s happening . . . 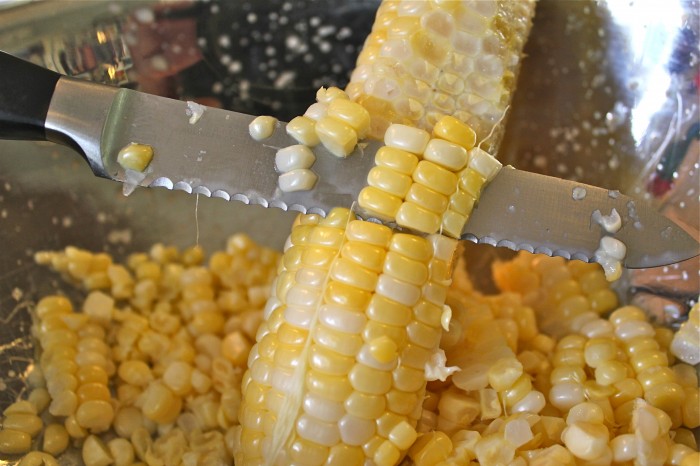 . . . cut about two cups of fresh corn off the cob, into a wide bowl (frozen corn kernels, unthawed, would be fine too).  (See that knife?  I can’t say enough good things about it, it’s my favorite, you would love it too I think, made by Henckels.) 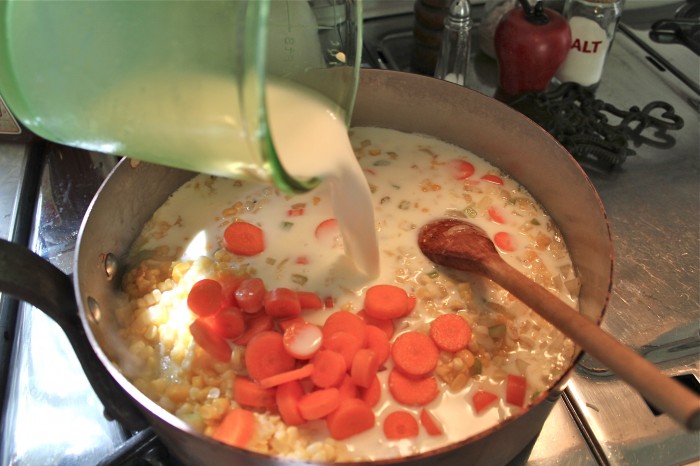 Stir the corn into the sauteed celery and onion; then add sliced carrots, one can of creamed corn, and 4 cups of milk.  Simmer all of this deliciousness gently for about 25 minutes, stirring occasionally, until the carrots are tender. (The green measuring cup?  Vintage, gotta go looking for it next time you’re out and about!) 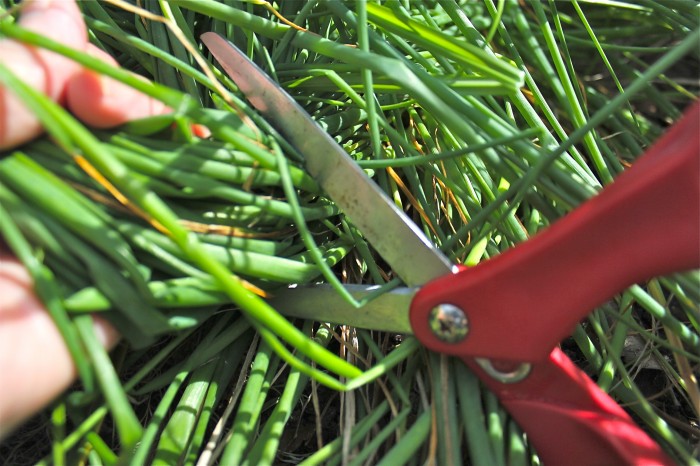 Out to the garden I went to collect chives for the finishing touch on this soup.  A moment to feel that cool breeze (soak it up to last through the month of travel!), smell the garden, and back to the kitchen all cozy with bacon and onion in the air.  Mince the chives . . . and set them aside. 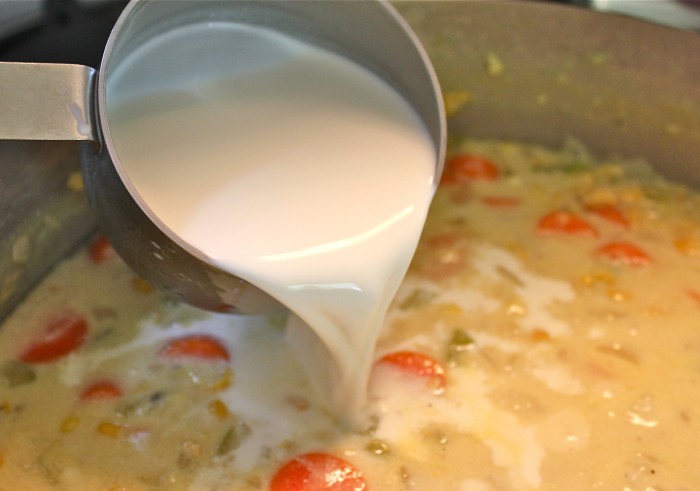 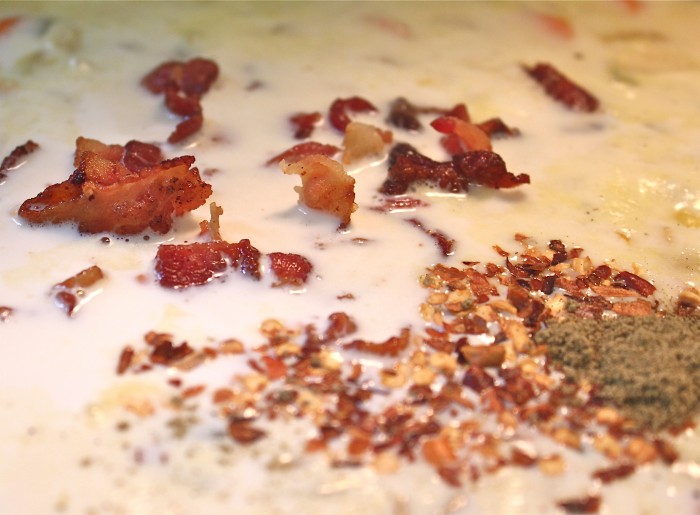 Then add red pepper flakes, ground sage, and half the reserved bacon pieces.  Stir well, heat through, and either refrigerate until later and reheat, because it’s just as good!  Or serve immediately . . . 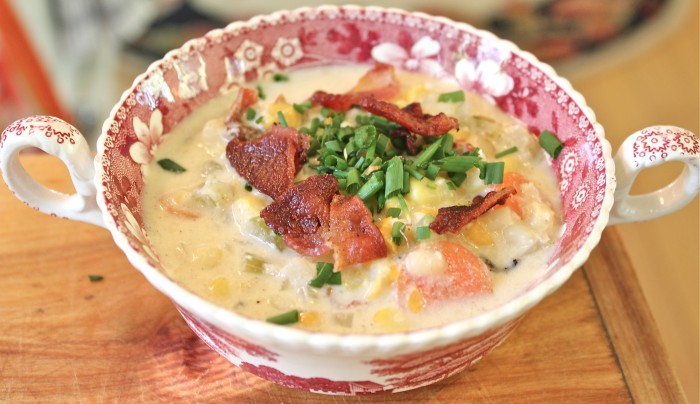 Ladle the chowder into soup bowls and garnish with bacon and chives. And that’s all there is to it!  What’s not to love? Well, maybe one thing, like lactose intolerance, if you have it. . . I will have a recipe better for you later on; this one is for the milky corny people! You know who you are. 🙂 Now for the recipe!

In a large heavy saucepan, slowly cook the bacon until very crisp; drain on paper towels; cut with scissors into 1″ pieces and set aside.  Pour off all but 1 Tbsp. bacon fat.  Put onion and celery into pan and cook over med. heat until softened, about 10 min.  Stir in corn, carrots, creamed corn, and milk.  Simmer gently for about 25 minutes; stirring occasionally, until carrots are tender.  Add cream, red pepper flakes, sage and half the reserved bacon pieces.  Heat through, taste for salt and pepper. Serve in soup bowls, garnished with bacon and chives. Plenty for six.  It’s the recipe on page 72 of the AUTUMN BOOK…this is just the soup version, so I added more milk and cream to thin it, but the recipe in the book is wonderful for a company dinner on a cold blustery night!

We’re dancing off to Costa Mesa for a street fair with the family today…wishing you all a great day. We do belong together, your comments make me know it, we’re just like pie and ice cream . . . xoxo

This entry was posted in Blog and tagged Autumn leaves, cooking, fall, happiness, How to make Corn Chowder, recipe, what's not to love. Bookmark the permalink.