Rabbit Rabbit, it’s October!  And as in “Where’s Waldo?” I wake up and ask myself, where am I?  Traveling does that to you!  Today I woke up in my house on the Central Coast of California, out in the middle of an old river bed (because that’s where the house is!) on eight flat acres with a little creek that runs along the back. 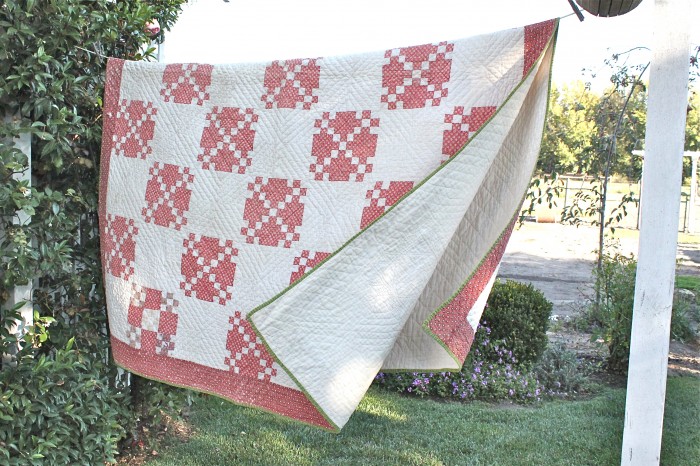 The first thing I did when we got here late yesterday afternoon was hang Cindy’s quilt on the line out in our backyard because some of the girlfriends wanted “see the whole pattern” — so here it is.  If you’re going to try and make this quilt, you’ll find some mighty tiny little patches there!  But there’s also a secret in this picture, which the wind, by flipping up the corner, has hidden from view . . . and here it is!

Just in case you missed it, Cindy Tuning left us the winning comment for this quilt in a drawing we had a couple of days ago.  She lives way up north in New York State, very near Lake Erie, so she is going to need that quilt; when the jet stream whips down from Canada this winter and blizzards come whistling off the lake, we’ll be thinking of her!

Much as I love us southern Californians, we don’t really earn our quilts quite the way northerners do!   I thought I’d give you a little tour of what it’s like here in our part of California . . . 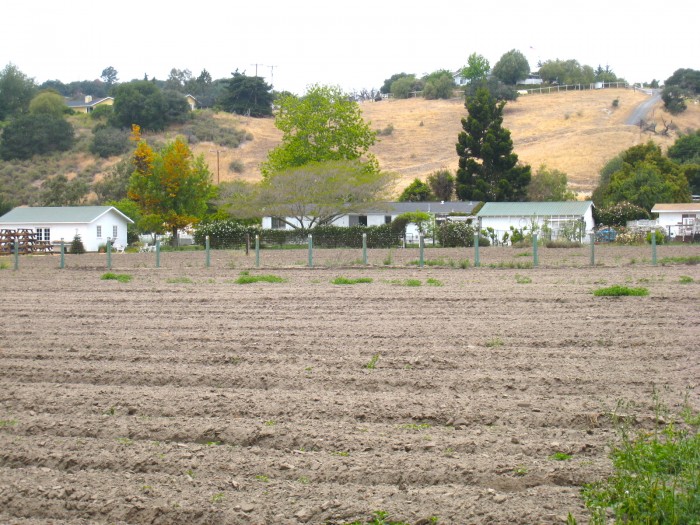 We bought this place about ten years ago.  The house is not fancy, it’s a two-bedroom modular home that the previous owner plopped down in this field in the 1960’s and began to raise goats. We bought it in 2002; and thought someday we might build a better house, but what happened is that instead of a house, we built a garden!  It started with another picket-fence garden that Joe built to match the one we had on Martha’s Vineyard. 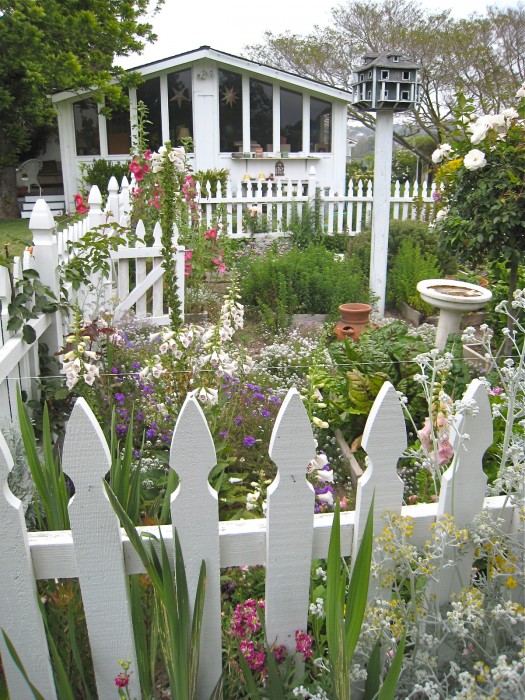 When we bought the property, it was all dirt, farm fences and barbed wire, a couple of trees, but no lawn, and no garden.  The house was brown, inside and out.  See what paint and green things growing can do!  A little silk pursy to the sows ear and voila! There were estimated to be 100,000 gophers living the good life on this property when we bought it. (They are not cute like the one in this wikipedia article, in case you’re lucky enough not to know what a gopher is. They are the mosquito of the underground garden-destroyer world.) 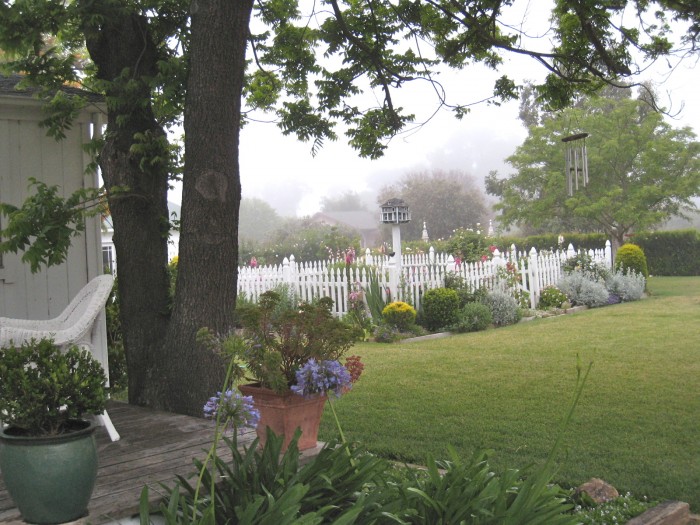 So Joe dug down about 3 feet or something, as if he was making a built-in swimming pool, but instead of concrete, he laid down chicken wire, and put the dirt back, and built raised beds; now the gophers couldn’t get in. Outsmarting gophers is one of the main things we do when we’re here.

We live in an “arroyo grande” which, translated into plain English means “big ditch,” caused by an ancient river that once ran through this valley (the year-round creek out back is all 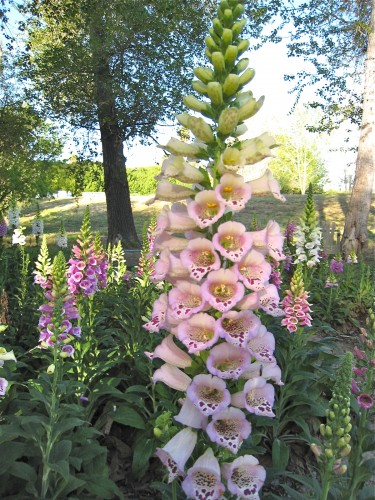 that’s left of it). So we actually live on an old river bed.   Although the ditch aspect means we have no cell-phone access and TV goes out all the time, we do have really good dirt!  Things grow here! ♥

And when they do, like these foxgloves we planted out back by the creek, it turns you into a person who thinks they have a “green thumb.” Hence, the garden, but no house.

We planted this escallonia hedge (we call it the “bird motel”), definitely the largest planting project we’d ever done, all the way down the dirt road that runs to the back of the property where the creek and the foxgloves are. . . 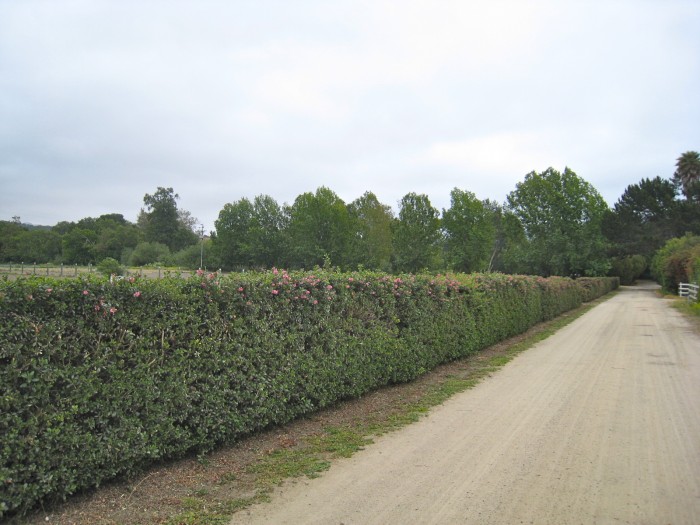 All kinds of critters live here besides us and the gophers; it’s like a zoo without cages.  Ground squirrels, also not cute, build mountains of hard-packed dirt.  We used to turn into our driveway and scan the property and all over you could see them flying into the air and diving into their holes like in a Roadrunner cartoon. ♣ We have coyotes, deer, bobcats, long gopher snakes, and mountain lions up by the lake. Bunnies, and who knows what else, live under the house.  That’s why they call it the wild west. But the weather is mild, the Pacific Ocean is about five miles down the road and sends fingers of fog drifting up the valley on some mornings.  There are very few mosquitoes. Nine times around the property equals three miles.  I know because I walk it every day I’m here, moving a rock each time I go around, to help me keep count.♥ 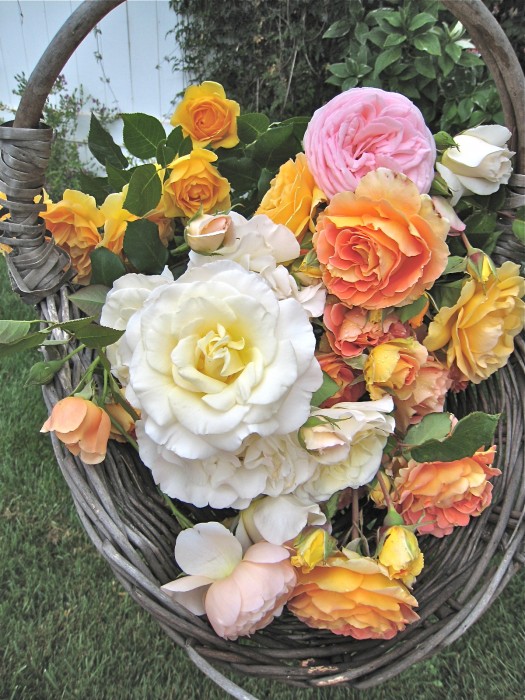 When I had my Heart of the Home store a few of years ago, I would cut roses from my garden early in the morning and go arrange them in vases and put them around the store. The orange one is “Just Joey” my favorite, along with the yellow “Julia Child.”  We thought we were doing pretty good, garden-wise. 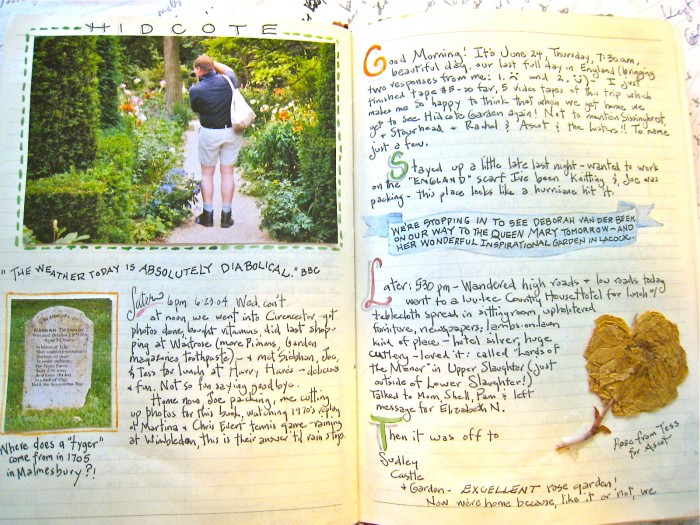 And then we went to England.  And found out what “real” gardens look like; we wandered through the English countryside, gasping daily at twenty-six different, amazing (stunning!) gardens; I took notes; we came home inspired.

Now not just any garden would do, we wanted an English garden to go with our trailer out in the ditch.  (Someday I have to remember to show you this whole English garden diary!)  So I went home and studied everything I’d learned and drew this garden plan, based on what we’d seen. 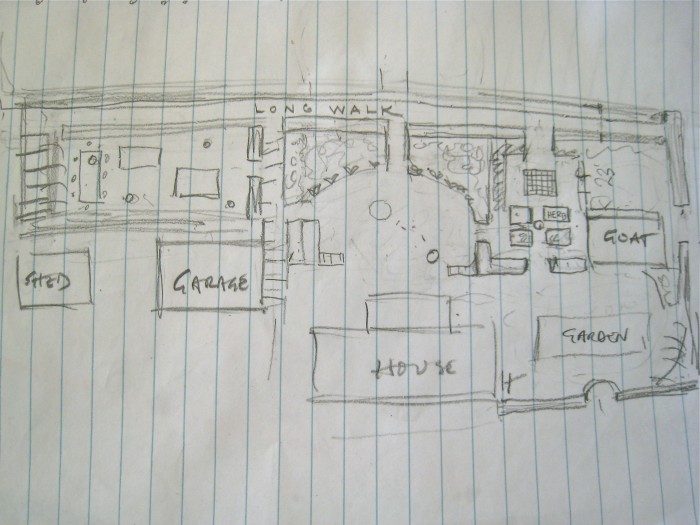 It would have a long grassy walk between two hedges, enclosed garden rooms, a semi-circular lawn off the back deck, an orchard where roses would climb the apple trees, just like they do in England.  (Where it says “garden” on that plan, that’s where the picket fence garden is, so maybe you can get your bearings.)

It won’t be a huge garden, but it could grow (maybe this is just a start, if I can please live to be 200) — but we’re thinking, if we’re lucky, it could more like the smaller Rosemary Verey garden at her home in Barnsley (we hope, in our dreams), only without the old stone house of course.  It might take a while. Stop laughing. 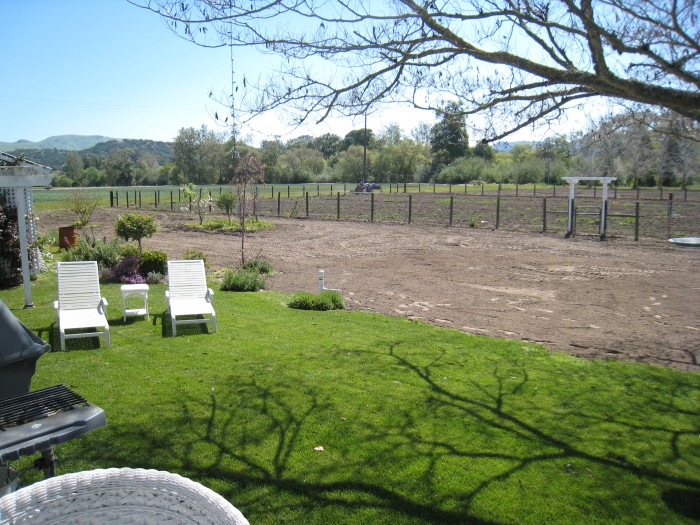 So, we moved the fence back, it used to border that lawn, and we cleared out all the weeds, and started planting. Hedges, as bones, came first, because they will take about five years to even look like a hedge. 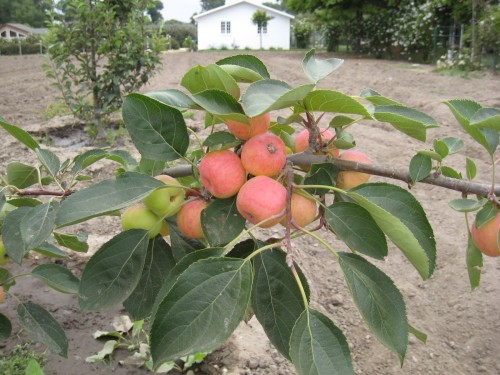 I know! I can hear you saying, “But you don’t live there!”  You’re exactly right! It makes no sense and we know it.  But the obsession won’t go away. We have this bug to leave behind a beautiful garden that we built ourselves, and this seems to be it. It’s the perfect place for year-round gardening. Who knows, when we’re old (er) and gray (er) and no longer able to shovel snow, we may run away to the trailer in the ditch.

So early this spring, we put in our first hedges of the new plan.  There’s a friend nearby with a big wholesale nursery (Ben Joy is the name of it; tell John I sent you!); he sells to regular people too, at good prices, and that’s where we get everything. Before we left last May, Joe measured and drew and marked it off; we ordered the plants; we have a gardener friend who lives in our house while we’re away, and he planted it for us. 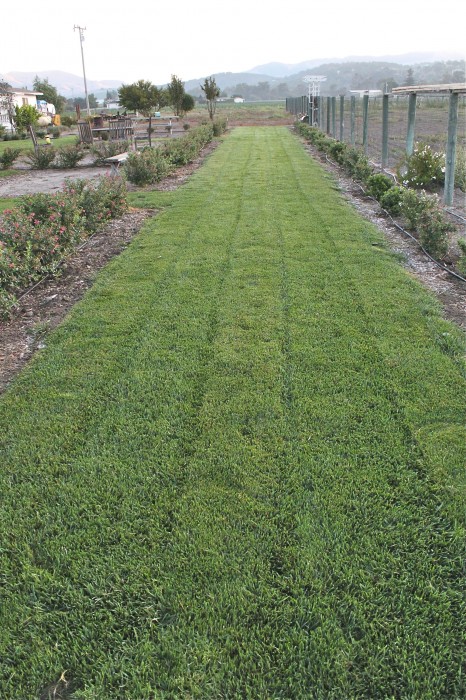 This is what we came home to, nice straight rows of new hedge bordering the long walk!!!!  It’s what’s been planted so far (we’re doing this a bit at a time, because we really have no idea what we’re doing, and spending this money feels better if it’s done in smaller clips). You have to pretend the escallonia hedges on both sides are so high and wide you can’t see over them. The walk only goes half the way so far, another chunk goes in next, so it will be a looooong walk. Joe said we should make it wide and gracious.  Yes, of course, I thought, to match the trailer and the ditch. 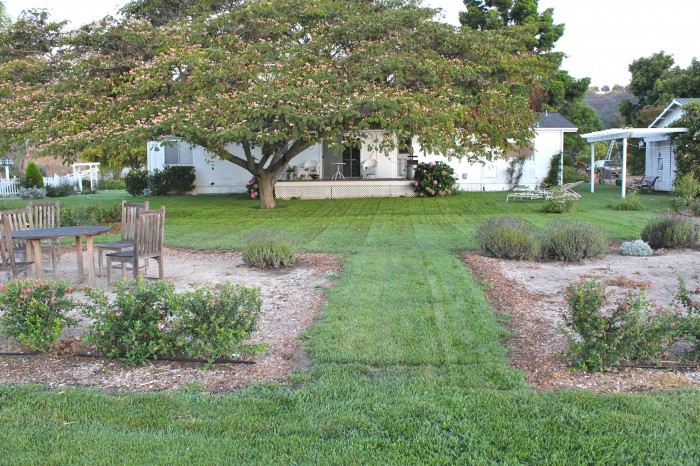 Every so often, the hedges (these will be tall, you won’t be able to see the house over them) will open into a grass path through other parts of the garden, such as the orchard or the allée (a short promenade between two lines of trees; Rosemary has one :-)); this path goes through to a semi-circular lawn. The dirt on both sides is for large flowering bushes, trees and perennial flowers. That tree in the background was reason enough to buy this goat property.  It’s an albizzia tree. 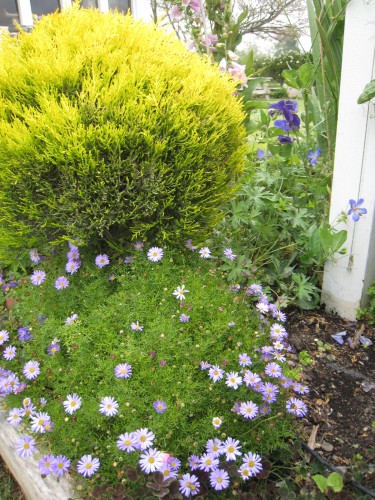 It’s not going quickly.  It’s a slow, process, but it has “someday” written all over its face: it’s in pure dream state right now.  This is the place where we most play the game, “what if we had a million dollars?”  Gardens aren’t cheap, but at least we get our water from the creek!

Have you planted your bulbs yet?  Spring will be here before we know it, and we are going to need that surprise!  I have to get HOME (we leave in eleven days! Get ready for more Twitter from the Twain if I haven’t bored you with it enough by now!). 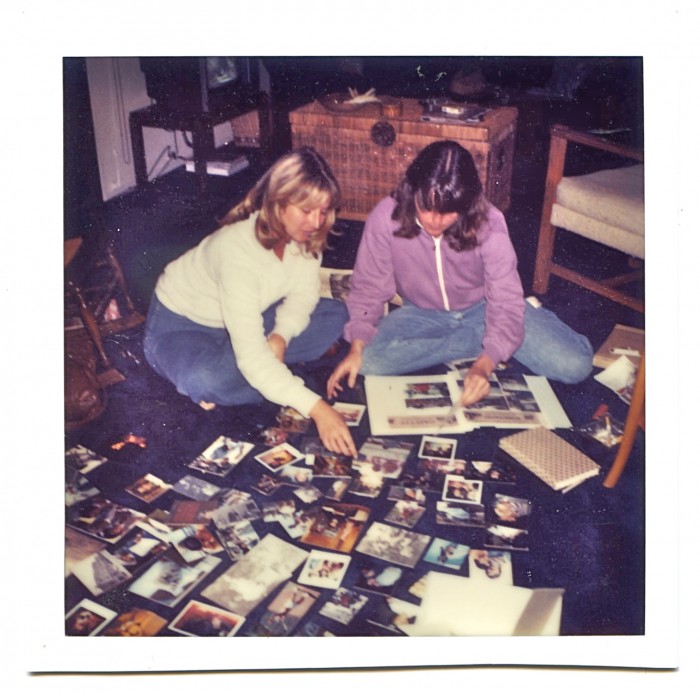 See why I’m a little bit homesick no matter where I go?

But it’s October, the most wonderful month of the year to be anywhere, it’s a beautiful cool day here, and guess what, two of my best girlfriends are coming over in a little while, with wine and cheese and I’m making lunch and we are going to go out and sit in the sun in the garden and talk our faces off! Remembering all the bad stuff we had so much fun doing together all those years ago! ♥ Diana (that’s her with me from the way-back machine) just called, she and Terrie will be here at 12:30!  I’m SO happy, and have to go now . . . and cut some flowers of course! xoxo Have a wonderful day!

This entry was posted in Blog and tagged California, English garden, garden, quilts, waldo in the garden. Bookmark the permalink.