Here’s that tutorial Joe promised us on how to make a wreath . . .  So fresh, smells cold like snow, makes the house smell like Christmas heaven!  And here he is, in his own little Santa’s Village on our back kitchen porch. 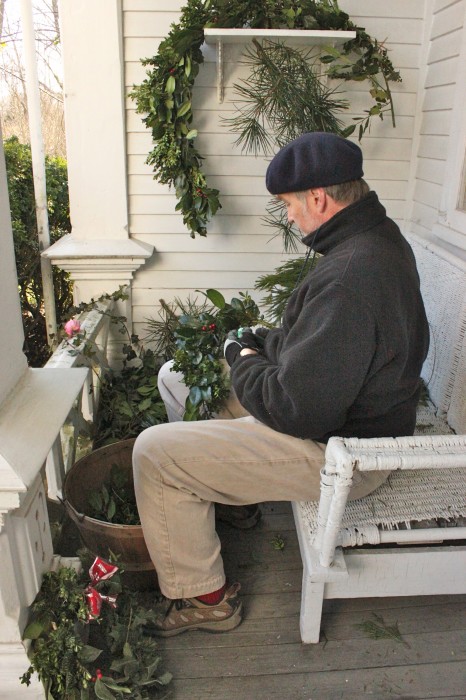 See the little pink rose on the railing?  It’s the last one from our garden.  Can’t believe it held on this long! 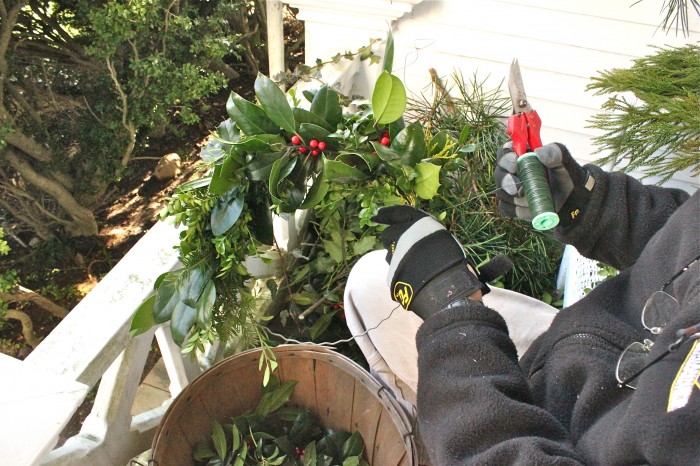 Can you see the florist’s ring he’s wiring the greens to?  If you’d like to do this, get a 10″ ring at your florist, plus some florist’s wire, clippers, and a pair of gloves.  And some cuttings from shrubs — Easy!

(Now for some MUSICA!)   In our yard, we found holly, Chinese boxwood, English boxwood, ivy, and pine, plus various clippings of things we liked from our walk in the woods and from the neighbor’s houses! Look around, you’ll find perfect wreath making things in a yard near yours! 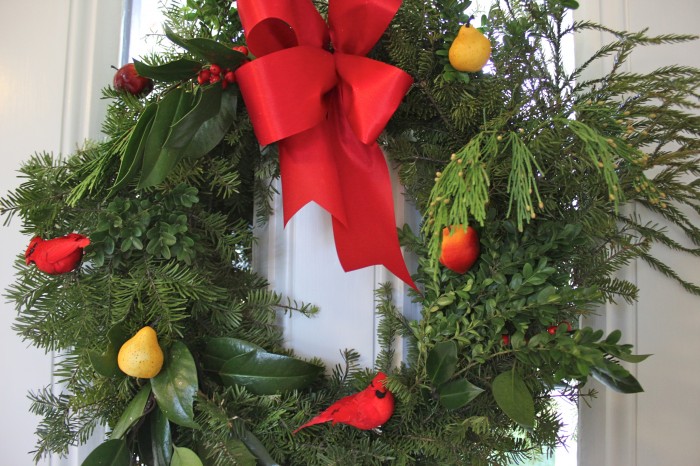 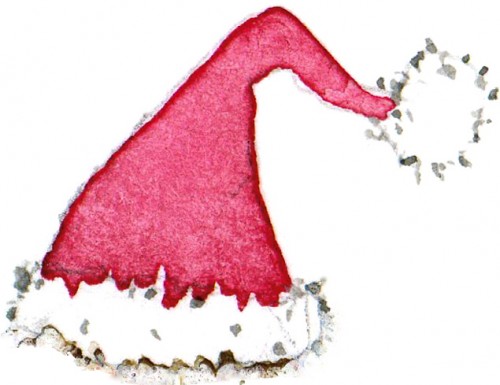 I think it’s pretty obvious from that video that we don’t actually know what we’re doing, (maybe I shouldn’t include Joe in that!  He would read this and say, “Who’s we?”) — but I’m sure he would say that he was winging it!  After Joe made a few, he got smart(er) and more experienced and started doing them like this one above — he bought a regular pine wreath, and then added a few of our own clippings to it; he did it all in half the time, and it still looks fun and fresh.  I thought maybe some of your husbands might like this!  Below is the one made completely from scratch. ♥ 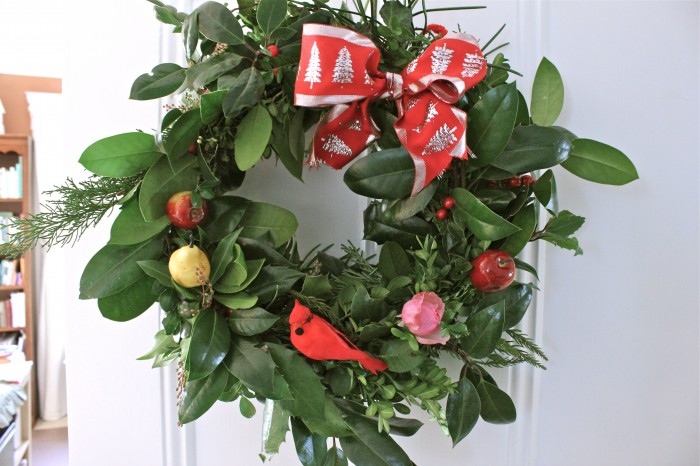 Joe just brought it in.  I think it’s beautiful!  Good job Joe!  See the little rose?  He put it there. 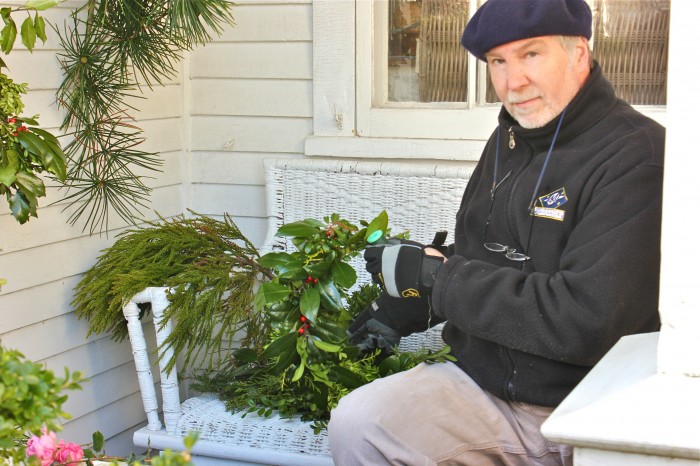 My hero!  For more reasons than one . . . . he also made me a special little roping for my Peter Rabbit Room all from English boxwood! ♥ 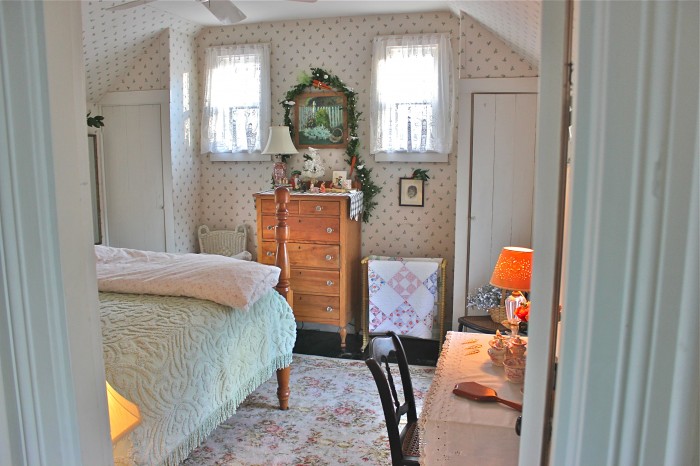 See it? Over the painting, between the windows? 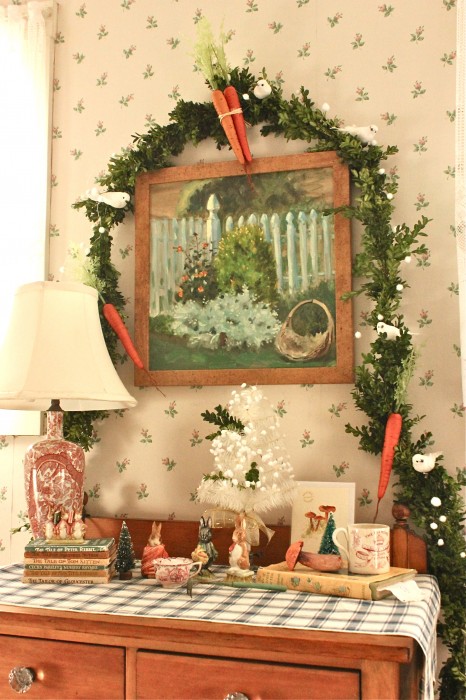 There it is . . . I added carrots and birds and snow balls and put in the painting I did of my garden, which I am now calling “Mr. SueMcGregor’s Garden” because I am a corn ball and now the entire world knows it.  I love this little woodland scene so much I’ll probably never take it down! 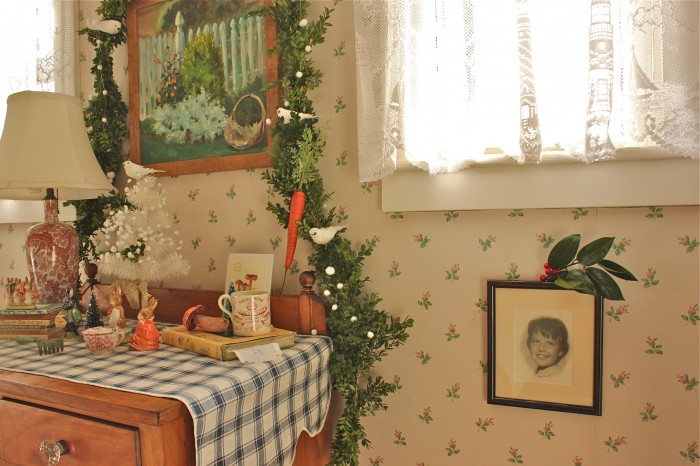 This is where I keep young me.  If I was that age today, and know what I know now, which is that you can have anything you want as long as you can make it, I would have a tree fort, and I would decorate it like this!  But you can see, it’s never too late! 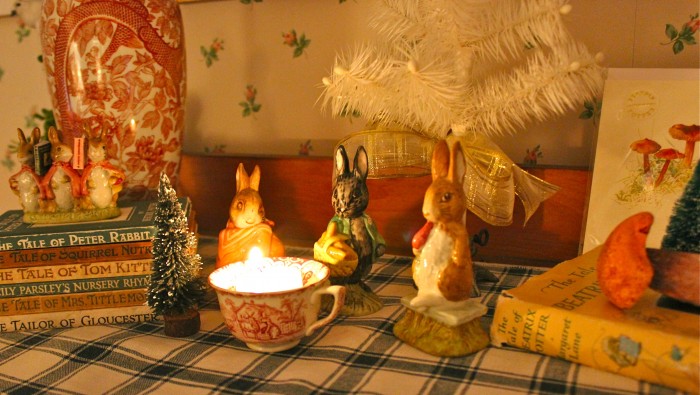 When I came back later, I found the Peter’s were having a bonfire!  Celebrating the winter solstice, I’m sure. ♥ See the little mushroom card?  That is also Beatrix Potter art, and on top of the yellow book on the right is a pottery mushroom, my treasure, I bought at the Armitt Museum in Ambleside in the Lake District.  I’m so excited because I’m just getting to the Beatrix Potter part of the diary I’m writing; she was so much more than I ever knew, and I love talking about it! 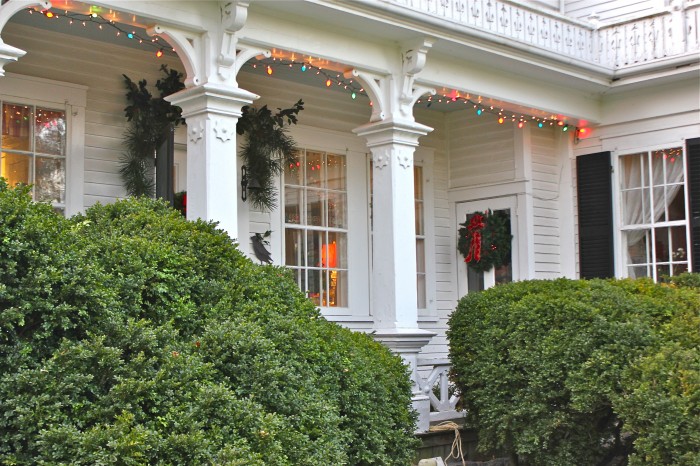 Well, I was trying to hold out and save the Peter Rabbit Room for later, but this is the problem with me and Christmas . . . I can NOT keep a secret; the fact that I had these photos has been poking at me like a finger in the shoulder all day long!  I want to give everyone their presents today!  Anyway, I hoped you would like it!  So there you go!  Happy Thursday Girls!!!    XOXO