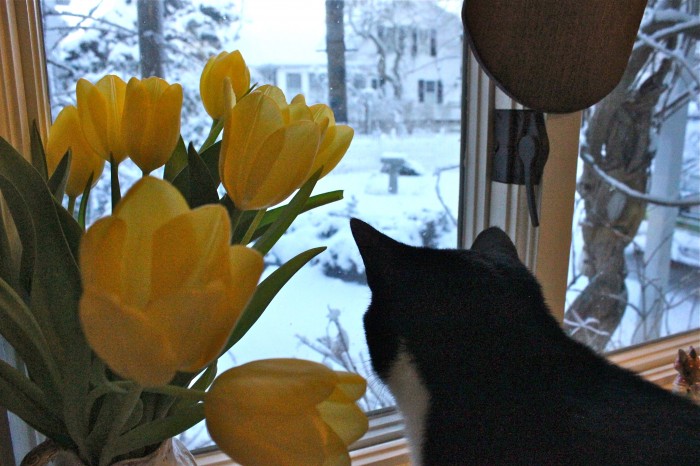 Here we are at dawn this morning in the kitchen watching the Snow Moon set and the light come up on the house next door.  The weather has been wild the last couple of days.

The winds were so treacherous last Thursday, the day we were supposed to go off-island, that the boat stopped running and we had to cancel the trip until the next day.  So on Friday, come what may, we had to go —  I put on my seasickness wrist bands and off we went across the water to the mainland because I had a date to be interviewed by Madeline Meile Holt for the Cape Cod Writers Center . . . 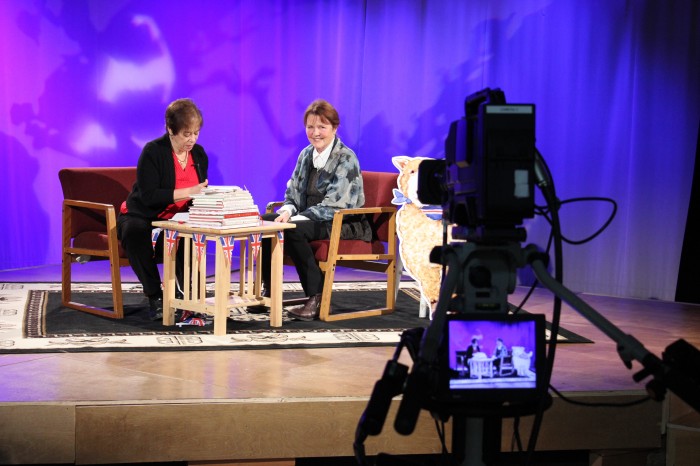 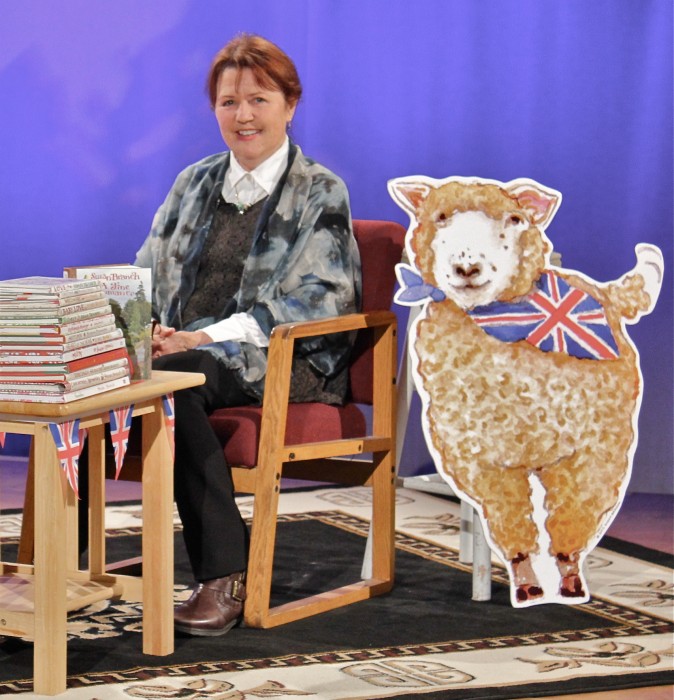 We brought along our pet lamb but forgot to mention it during the interview.  I wonder what viewers will be thinking about him!  I was on this show years ago, when my first book came out, so it was fun to come back.  They said they’d send me a link to the show in a few days and if they do I’ll be sure to put it up.

The next day, which was Saturday, there were Winter Storm Warnings for central MA, and Blizzard Warnings for the coast and islands.  That was the day we needed to be at Costco.  So up we went, north, just south of Boston to the Costco in Avon, MA.  We arrived amid a flurry of customers rushing to get stocked up before the storm came in.  It was fun.   There was a holiday aspect in the air; Costco would be closing early so their employees could get home safely.  People were all bundled in snow clothes, hats and scarves, some of our Girlfriends braved the storm and came to see me, Twitter friends too, and I signed books for lots of nice Costco employees.  I met some darling children — and while I did that, Joe shopped for us and our neighbors Lowely and John, he filled his basket and packed up the van . . . then we ran for the boat, Joe was sure we could make it before Blizzard conditions took over. 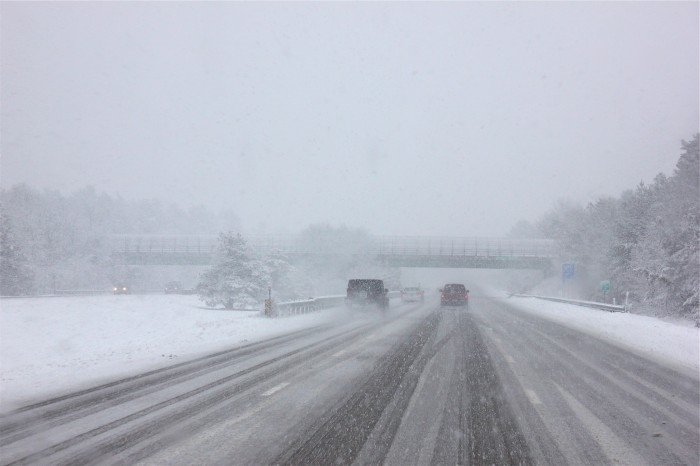 I wasn’t so sure, but here we are, homeward bound.  The whole time my chicken gene is telling Joe’s wild wolf gene that this was not a good idea.  Pure icy slush on the road, it was already a deluge and the Blizzard warning had not even gone into effect. But wolfman was not listening.  He was putting on some MUSICA … snow patters the windows like hail . . . wind blows . . . you can’t tell where road ends and sky begins.  Chicken gene has me thinking too much. 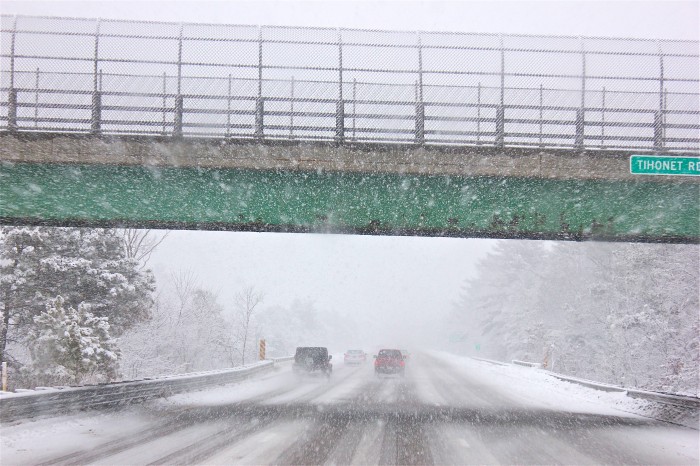 I was forced to explain to Joe that there are two of us in the car. One is a victim and one is a wolf.  Snow is slanting into the windshield.  I take my mind off of imminent slide into cranberry bog by taking pictures.  Can you imagine how cold that water is right now.  OMG. 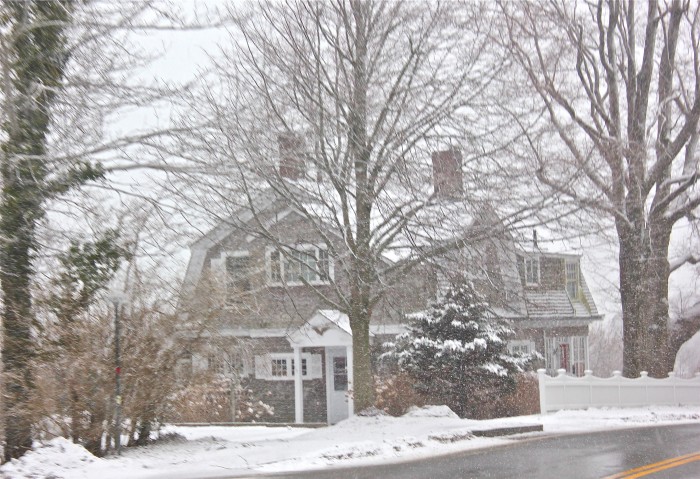 But Joe was sure, he promised me it would be all his fault if something happened (which of course just made everything OK) and persevered through car-rocking wind blasts, eating Costco guacamole (yum) and Costco “pop chips” brown rice, quinoa, multi-grain chips (also yum), over the Bourne Bridge (arched high over the frozen Cape Cod Canal), down Rt. 28 careening past cars who were going five miles an hour, finally arriving here, in Falmouth, we made the turn to Woods Hole. My chicken mouth quit peeping because “we” seemed to be committed.  (Dad, I tried to tell him you wouldn’t like it!  He howled ow! ow! owwwww!) 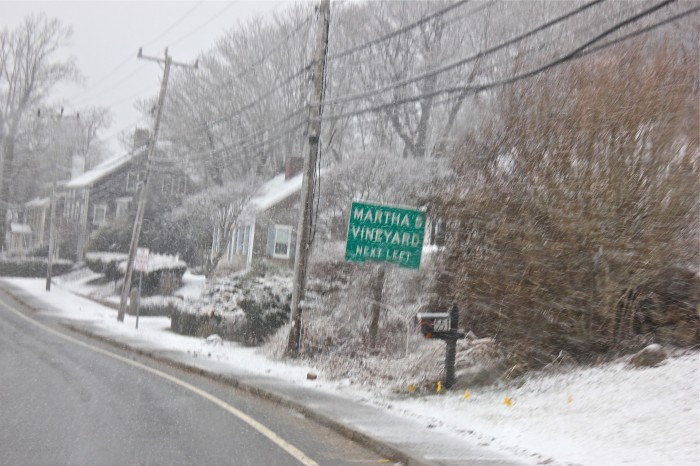 As Joe sings “theres a song that they sing as they take to the highway …” I kept reminding myself that he was born here.  He speaks the language of winter.  He has

never gotten in an accident.  He can fix anything.  (What has that got to do with it?  I don’t know.)  And then, there’s the sign to the island blurring past, we are getting closer.  But we still don’t know if the boat will be running or not.  It’s blowing snow, visibility isn’t very good, if the boat does go, will the Captain be able to see the island or will we drive right past, lost in the blizzard, on our way to France?  Is he a wolf or does he have some intelligent chicken blood in him? 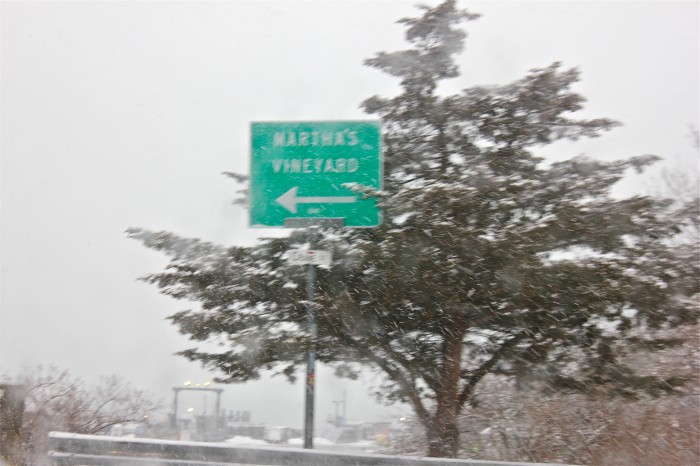 Woods Hole, we’re here … and that’s the ocean out there.  Visibility is wonderful.  Perfect weather for boating.  Is the boat even here?  Can we get on when our reservation isn’t until 7:30 and we’ve managed to arrive at 3:45?????  These are the questions. 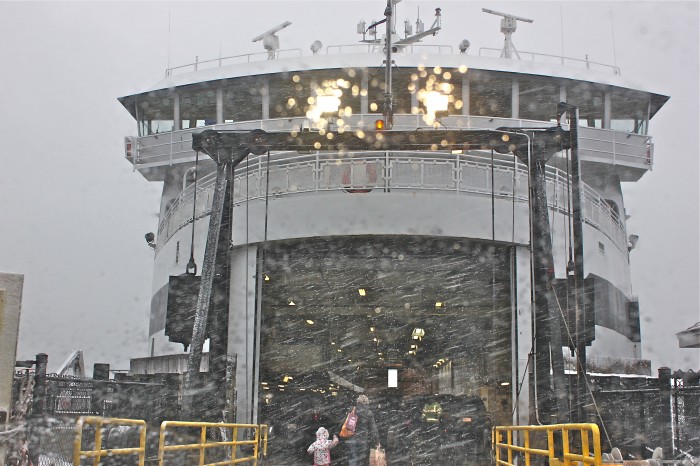 But yes, there it was, big mouth wide open, almost done loading but there was room for us.  No turning back now.  Thoughts of kitties are what I’m using for propellant because good sense would never allow this.  Wolf packs run the ferry boats. 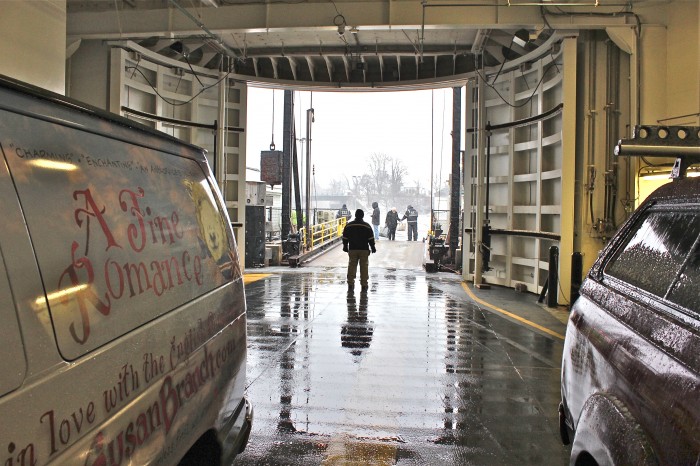 On we went, wristbands in place. Straight to the bar. 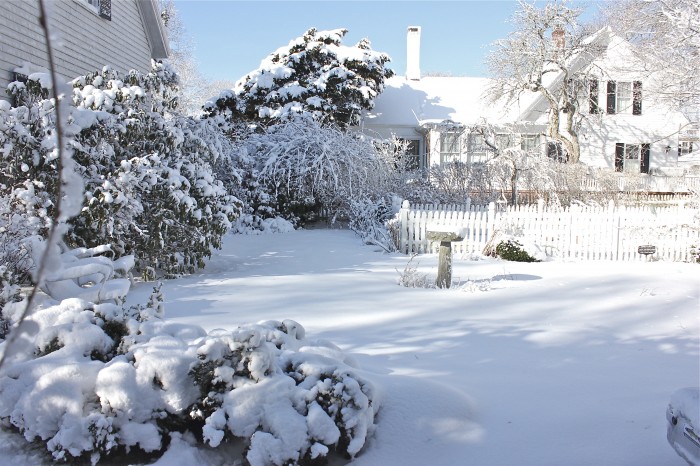 We made it, you know that because here I am.  A happy ending.  My hunny bunny got me home safe and sound just as he promised.  Wolves rule.  If chickens ran the world we might never get home.  I am sense and he is sensibility.  We are so brave.  Jack jumped up and rubbed against me a hundred times.  Girl rolled over for her tummy rub.  We unpacked the van and slept all through the storm and look how gorgeous it is today. 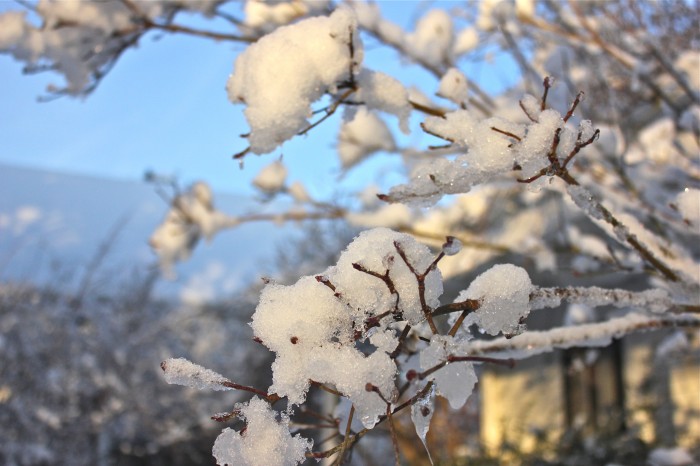 Snowflowers are on every tree, like spring cherry trees in bloom. 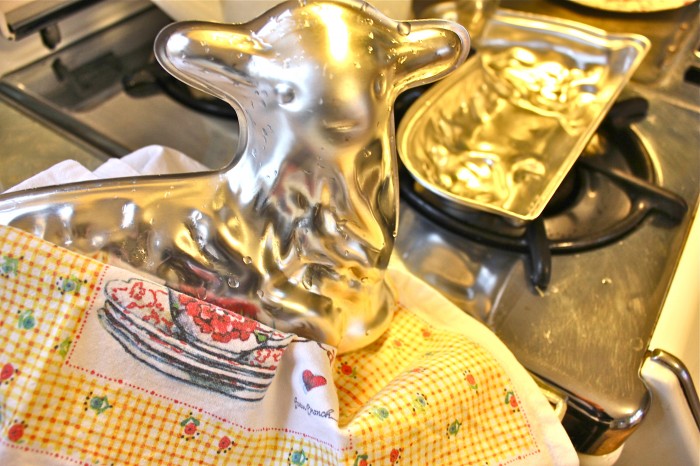 Joe’s outside filling the bird feeders . . . And I’m doing this.  Making a lamb cake to take to a dinner party tonight . . . the 1933 version of State Fair is on TV, I’ve never seen it — but it makes good background noise for stove heating and cake baking. 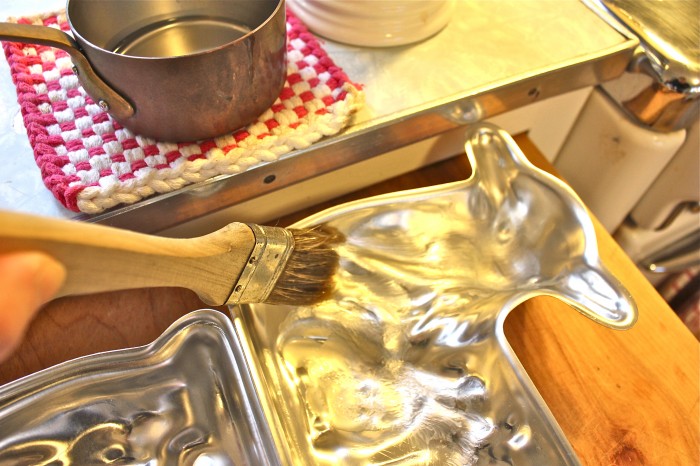 First I grease the pans . . . I’ll save the rest of the story until next time.  Have a wonderful day Girlfriends. ♥