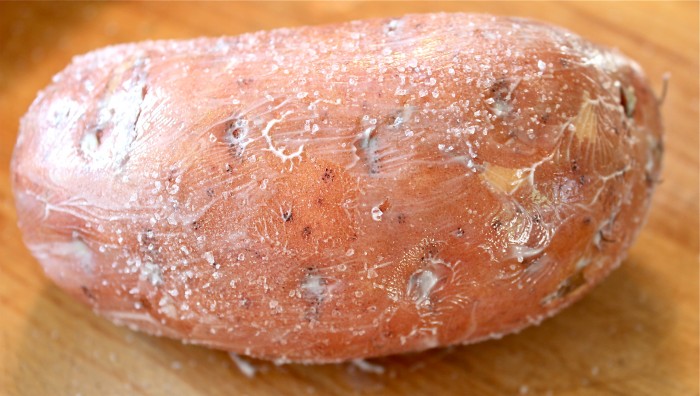 Here’s the victim; scrubbed, stabbed, smeared, and salted, ready to go into the oven. 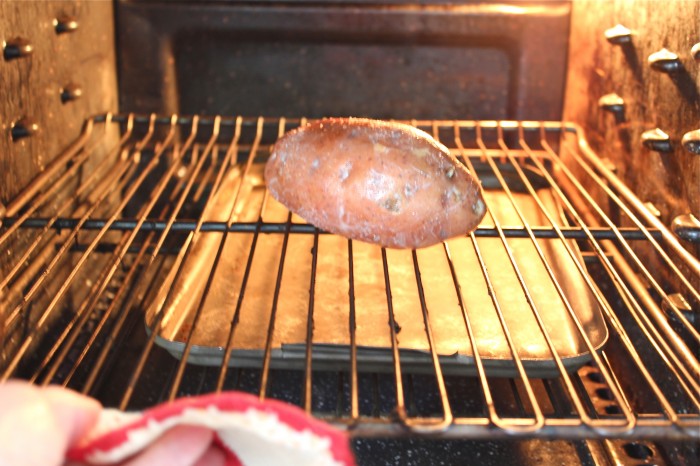 One big sweet potato was all we needed for the two of us.  Preheat the oven to 425°. Put a tray (or just a piece of aluminum foil) on the bottom rack of the oven to catch those pesky sweet potato juices (keeps the oven clean). Pierce the potato a couple of times with a knife.  Then smear the skin with soft butter and salt it well (we get organic potatoes so we can eat the skin!).  Put the potato in the oven to roast for 1¼ hrs, until it’s easily pierced with fork. 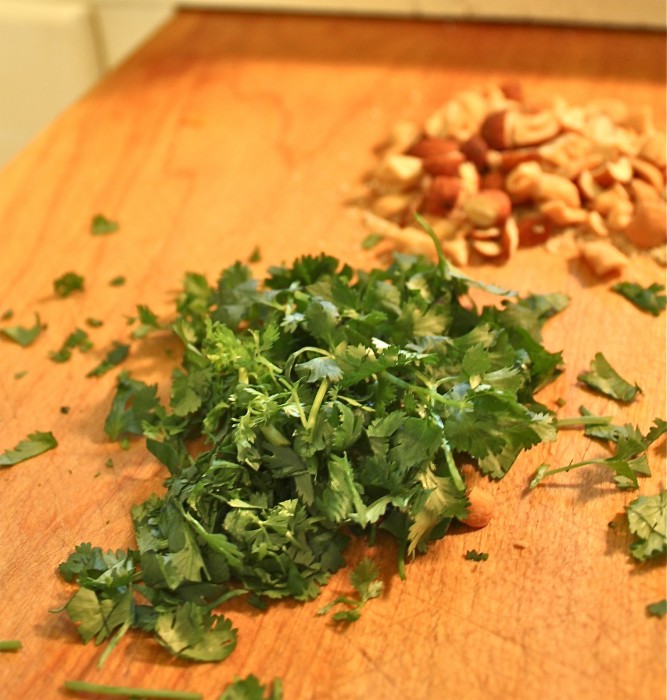 While it’s baking (and making your kitchen warm and fragrant and homey smelling), chop 1/2 c. fresh cilantro (and/or basil) and about 1/3 c. salted peanuts. 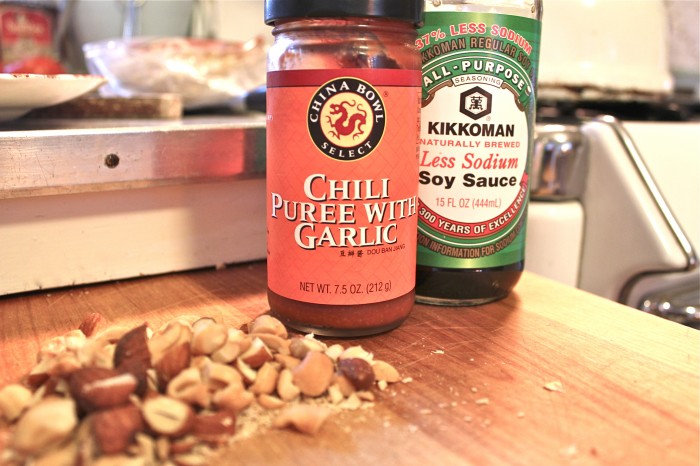 You will need to have these two items in the house also . . . Chili Puree with Garlic, and Soy Sauce. 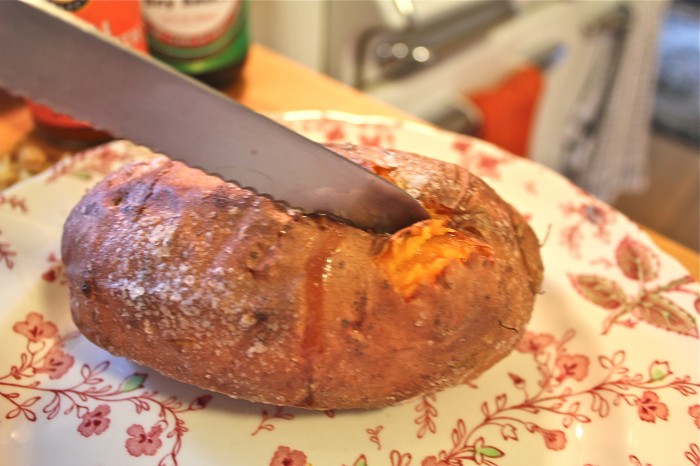 When the potato is tender and almost carmelized, pull it from the oven; cut it in half, and fluff it up with a fork.  (You might want to put on your sunglasses for these next photos, but remember, the brighter color of the vegetable, the more good beta carotene that lurks within!) 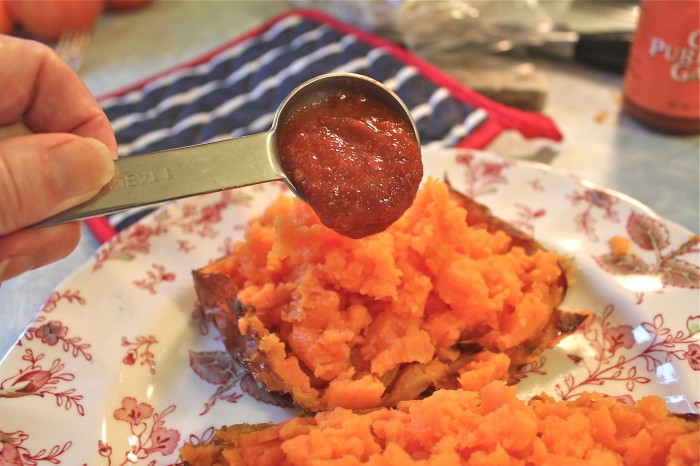 Yeow!  This is an extreeeemly healthy potato!  Split one Tbsp. of Chili Puree with Garlic between the two halves. 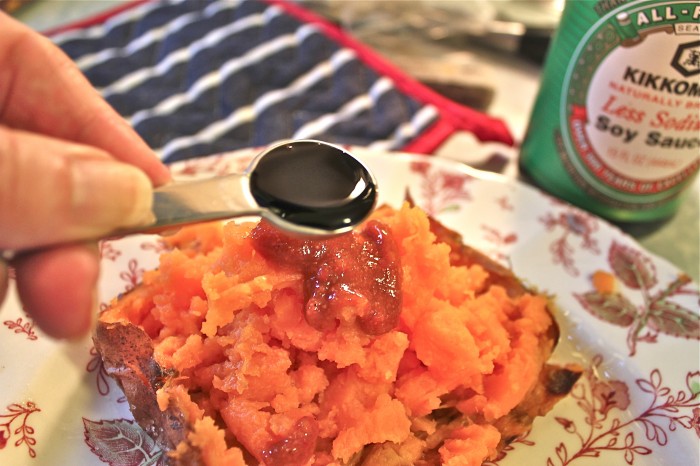 Split the 1/2 tsp. of soy sauce between the two halves as well, and carefully mix the sauces into the mashed potato. 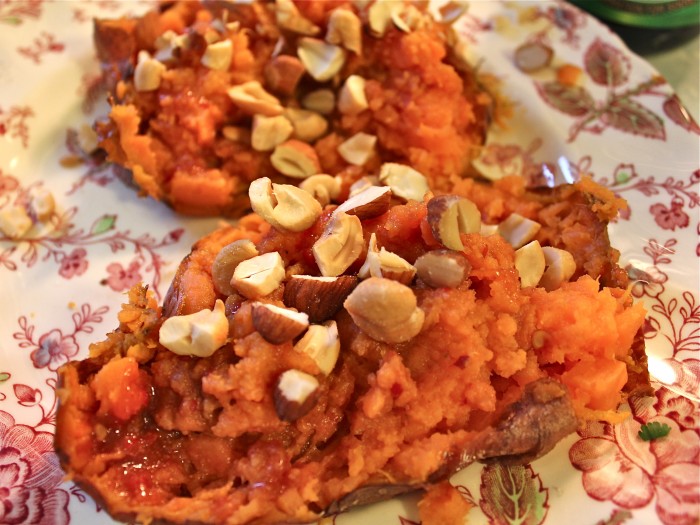 Sprinkle over the chopped nuts. 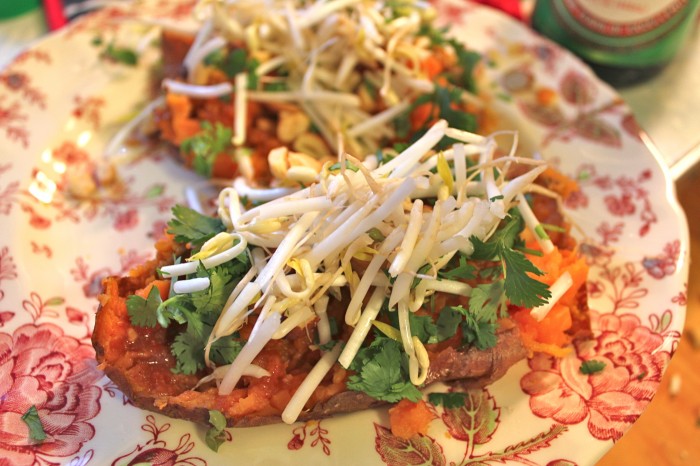 Top them with the cilantro (and/or basil).  Roughly chop about 3/4 c. fresh cold bean sprouts and divide them between the two halves, squeeze over the juice of one lime, and serve . . .  This may look a little odd, but trust me, it’s delicious and makes you feel really good about your non-butter-eating-for-once self. 🙂  Every bite should include a bit of the skin for extra goodness. 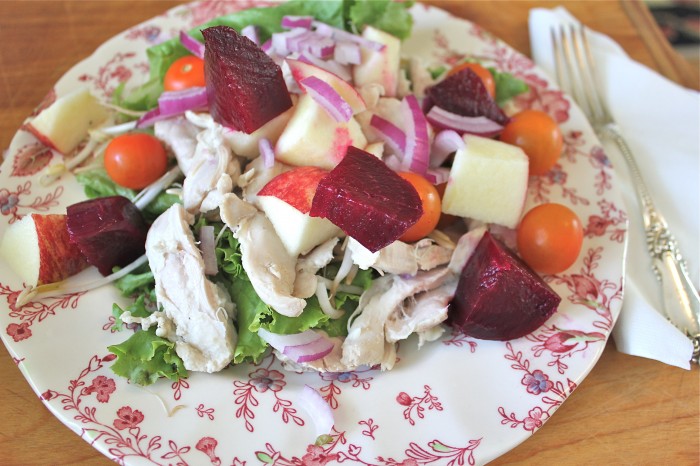 And to keep the color/health thing going, we had it with this.  Roasted chicken salad with apples and steamed beets, chopped red onion and cherry tomatoes.  And we bravely had it with no dressing, because there was so much flavor, we figured we could get away with it, and we did!

So here is the recipe, all in one place, for:  STUFFED SWEET POTATO

Preheat oven to 400° and put a tray on the bottom rack of the oven to catch juices from the potato.  Pierce the potato several times with a knife.  Smear butter all over the skin and salt it well.  Bake 1 hour 15 min.  While it’s baking, chop the nuts, herbs, and bean sprouts.  When a fork easily pierces the roasted potato, pull it out of the oven, cut it in half, and fluff it up with a fork. Split all the rest of the ingredients between the two halves; drizzle over the chili puree and the soy sauce and gently mix them into the potato.  Sprinkle on the nuts, herbs and sprouts, squeeze over the lime juice, and serve!  ♥