Just an add-on to the post below, because enquiring minds want to know; the mystery has been solved! It’s just as we thought, a harbinger of spring with a mind of its own! 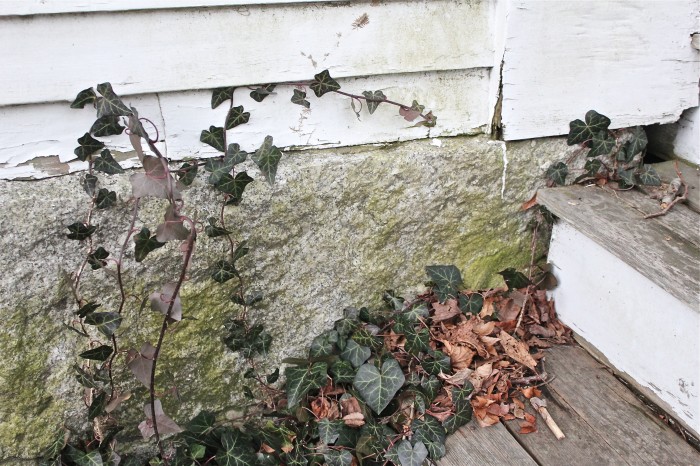 Joe finally went to the scary, dangerous basement, to beard the little thing in its den; he took the flashlight (you need a flashlight in the corners down there, eeeek), and traced the little plant, aka Audrey, aka Jack’s Beanstalk, back to the source.  He was down there for awhile; I didn’t hear any screaming.  Then he started back up the basement stairs. I could hear him coming out of the deep dark blackness; he seemed to be moving very slowly; he was on the first step, he was on the second step; I stood breathless, my heart in my throat, waiting; what was taking so long? Was he all right; did he find it?

Nothing.  He wanted the camera.  And around the side of the house he went.  When he came back to the kitchen, he had the answer:  there was ivy growing around the foundation — it had crept up under the clapboards and into the house under the sill, it traveled 2 1/2 feet in the dark before it found the tiniest crack between the wall and the floor of our dining room to slip in and make itself known.

We’re keeping it for a little while.  I’d love to let it grow up, get fluffy, and frame the doorway of the dining room! Joe says it won’t hurt anything for a while, but if we leave it, it could cause damage, so after a while he will cut it at the root, and that will be all of the story of the brave little ivy who came in from the cold.

This entry was posted in Blog and tagged little ivy that came in from the cold, mystery solved. Bookmark the permalink.