Everyone is a Winner Today ♥

One last look at the tea cups, now, while everyone is still the winner!  Here’s the celebratory good old MUSICA for this post girlfriends! 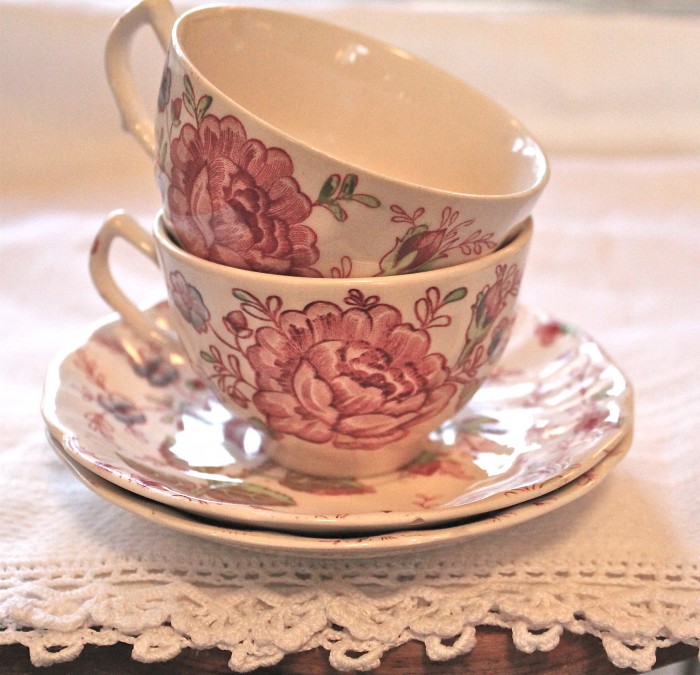 These two pink and white Rose Chintz cups and saucers, the special ones with the magic party dust, the ones that say “Made in England” on the bottoms, are about to be packed up and sent off to one of you!  I can’t tell you how much I’ve enjoyed your comments the last three days; I’m

the one that feels like the winner! I love all your wonderful stories, but especially I’ve been having fun hearing where everyone is from!  Suddenly this small world got even smaller!  Thank you!  Keep doing that! ♥

So here we go girls, the time has come; our adorable Vanna Game Girl is dipping deep into the vat filled with your names, swirling the tiny bits of paper around; I see names coming to the top, turning and turning, and now, here it comes, she’s got one!  And the name is:

LIFE OF JACK: a retrospective 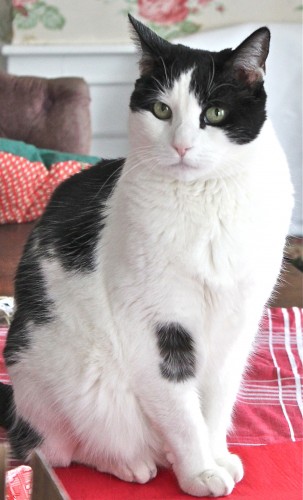 I think I have to tell the story from the beginning.  We have so many new readers since we got Jack!  Jack is the kitten we got last fall.  This isn’t him, this is our other cat, Girl Kitty who was part of the inspiration and reason I thought it would be a good idea to get a new kitten. I had put my name in at our local shelter for a tuxedo kitty (I love how they look with the furniture); they didn’t have any at the time, but said they would call me when one came in for adoption.  I figured three maybe four months at the earliest.

I’ve always had at least two cats, sometimes three, and now we only had one. I thought a new kitten might be a BFF to Girl Kitty, who is ten and has gotten very lazy; she rarely plays, she just lays on the bed all day, coming downstairs just to make an appearance every so often; I hoped it might help her get up and get moving. But when the shelter called only a week later and said they’d gotten in a ten-week-old male kitten and were holding it for me, I was worried!  This was so sudden!  I hadn’t yet asked myself the hard questions!  Are we sure we want another cat?  Will Girl Kitty like it if I bring a kitten in?  I wasn’t sure I knew how to integrate two cats; I’d never done it before; I always got my kitties in pairs!  I found out when I went to Google that introducing a new kitten to an older kitty wasn’t as simple as it looked.  But I’d asked them to hold it for me, the least I could do is go look.  Right?  I had to at least go look.  Joe put the cat carrier in the car “just in case.” 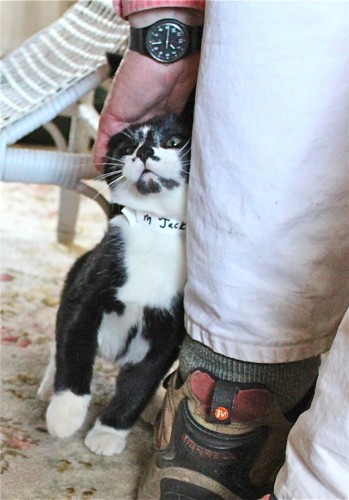 On the way over, we talked about what we might name this kitty, if by any chance we decided to take him home.  I’ve had two sets of Girl Kitties and Man Kitties.  I’ve never been any good at naming cats! I think of good names, I think of ten thousand good names; I just can’t pick ONE.  So they end up being named what they are.  Girl. Cat. Man. Cat. I was tired of my boring name choices; someone else needed to choose!  I told Joe I didn’t want to name him Man Cat.  He said, “Why don’t we call him Jack?”  “Jack,” I thought, “Jackie, Jack Hammer, Jackie-Boy, Jackster, Jack O Lantern,” yes, this could work.  I would have taken any name Joe suggested as long as it wasn’t Man Kitty, but my dad’s name is Jack, so why not name him after my dad?  So that was the whole conversation about his name; we pulled into the driveway, parked out front and went through the glass doors of the shelter. We left the carrier in the car, because really, we weren’t sure we even wanted a kitten! 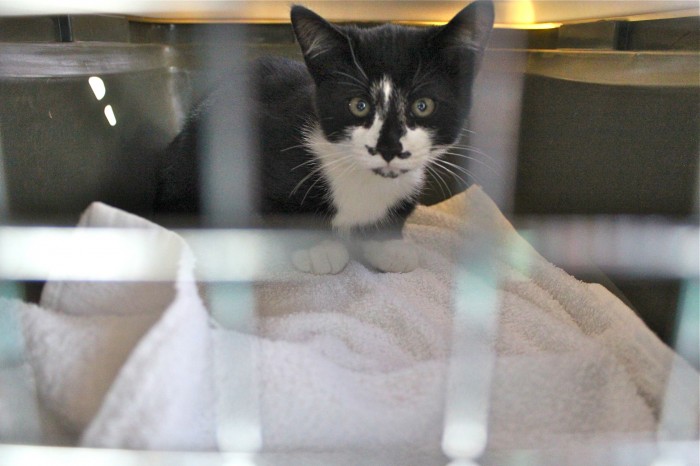 Less than a half hour later, we were on our way home with a kitten!  When they showed him to us, all tiny and cute, we were a little bit shocked to see that he had a mustache!  It took a minute to get used to it; it looked kind of like a splatted spider tattooed on his face at first, it took maybe four days after we got him home for me to actually like it; but the personality that goes with it is so sweet, that now I LOVE it. The thing was, when they handed him to me, all cuddley and soft, he moved his head and I could see the collar they’d put on him there at the shelter — and it said “JACK” on it!!!

“I’ll go get the carrier,” he replied.

What choice did we have but to bring this odd, wonderful, pre-named, meant-to-be, kitty home with us?  None.  He was destined to be ours.  Here he is, his first week at home.

We gave him the Peter Rabbit room for his very own, so we could keep him separated from Girl for a few weeks.  We removed the quilt on the bed, the embroidered pillows, the bundle of lavender, and the Laura Ashley hat; hid the old Beatrix Potter books, kitty-proofed the room, because, there’s no doubt about it, a kitty is a baby!  You do just the same things to raise a good kitty as you would do to raise a happy baby: give them lots of attention, cuddle, kisses and love, eye-contact, play with them day and night to engage active little minds, and forgive them (actually try not to even care, easy come, easy go), every single time they chew any of your beloved things to shreds. 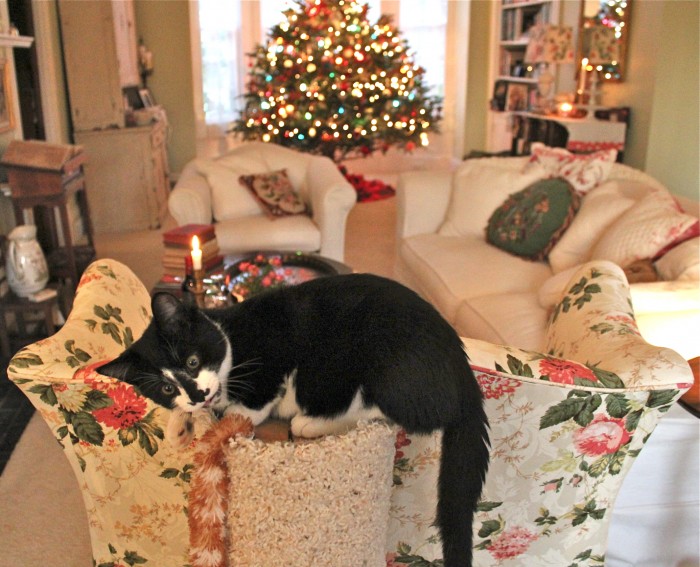 His mustache was so interesting; everyone thought we should call him Jacques; he looked like a French movie star.  My personal favorite came in from one of our younger readers, who ignored the mustache and just called him Jack Kitteh.

And then we started thinking, perhaps he was a decendent of Hercule Poirot, Agatha Christie’s debonaire detective.  Part cat, part man.

Then Kellee and Sheri from the my Studio in California sent me this photo Judy took of them! 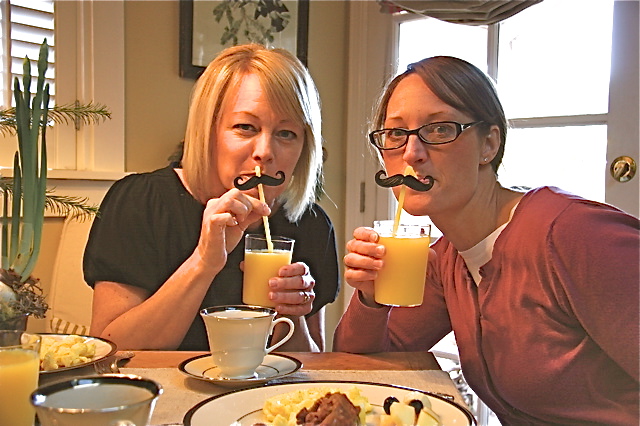 They went to breakfast one day before work and took Jack-stashes with them. 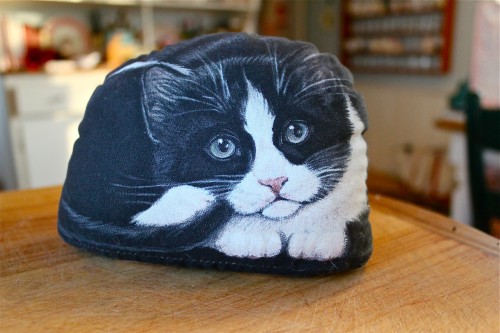 Then I found this little kitty pillow I’d had for years . . . 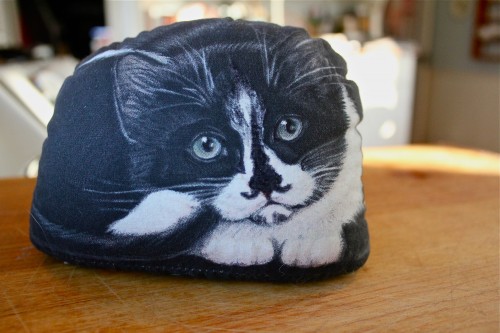 And changed it to this . . . with my little black marker!

What is wrong with you people?  Never seen a mustache before? 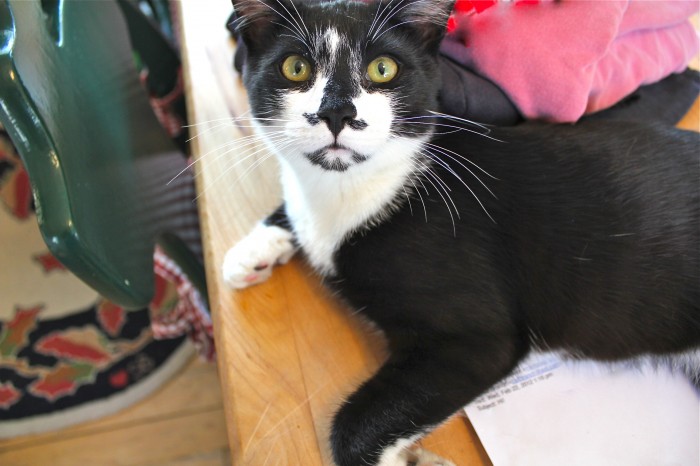 He wonders why we would be calling him the maniac!  He saw this silly eraser Joe left for me on my desk.  He wants to know if we are mocking him in some way.  Oh noooo, Jack, we have fallen in love, you are our mascot. 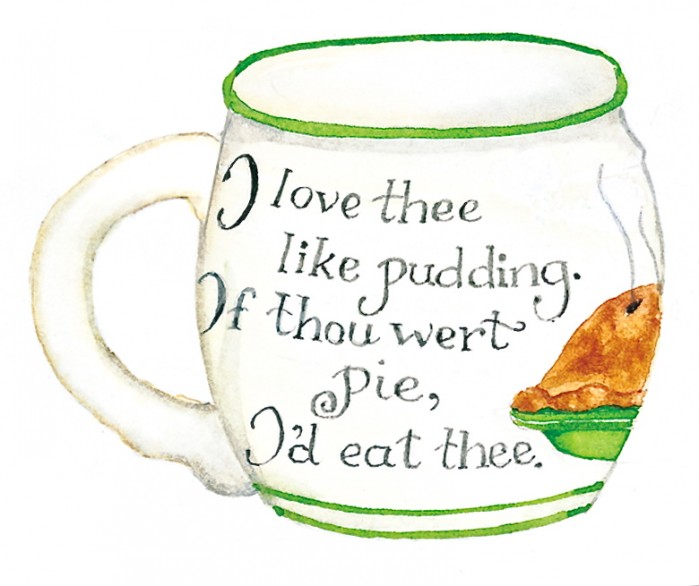 And such a big help around the house!  Folding sheets was never this fun before! 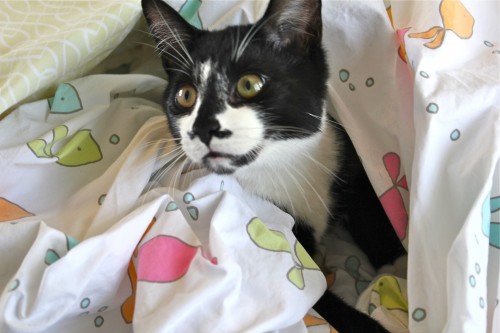 And such a smart boy, my little cat. 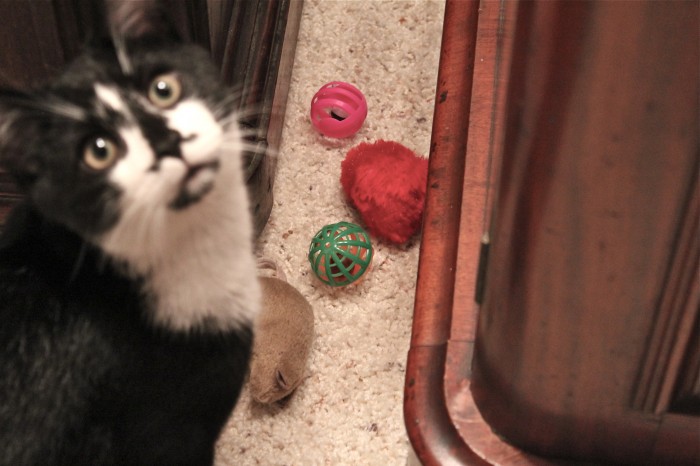 He collects his toys all in one place. 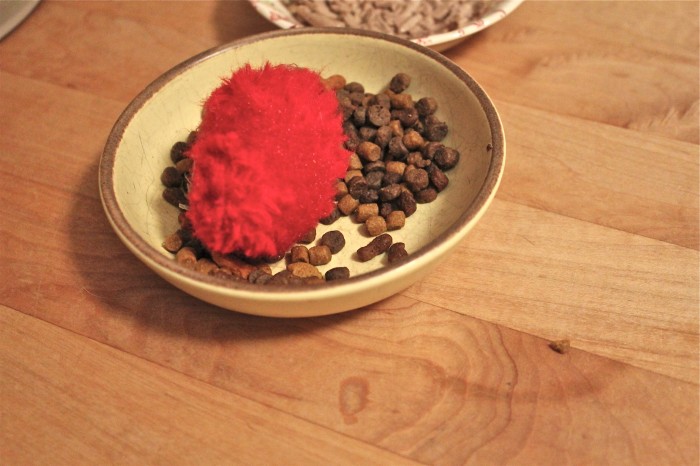 The other day I came in to find Jack’s favorite toy in Girl Kitty’s food bowl!  A small token of his great affection?  Asking her on a play date?  He drops it in my watercolor paint water too; which I really love.  He takes it upstairs to Joe early in the morning, while he’s still in bed, and deposits it near his chin.  He’s under my desk, playing in the trash can right now.  The person getting the exercise is not Girl Kitty, it’s me.  He is my shadow.  Wherever I go, he goes. 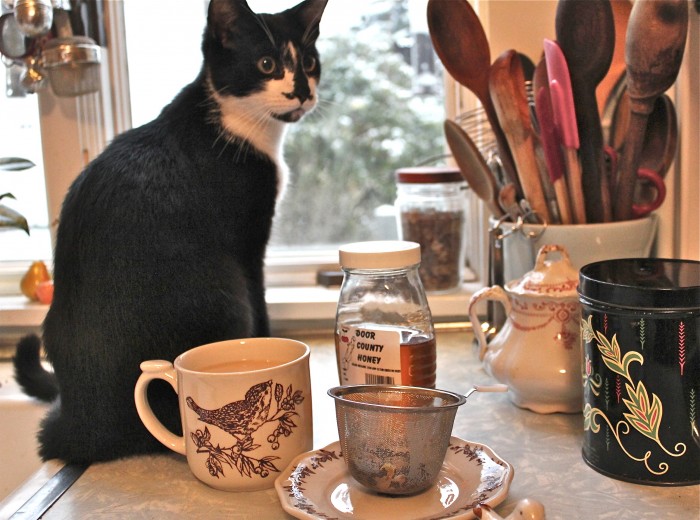 I make tea, he makes tea.  He likes a bird cup. 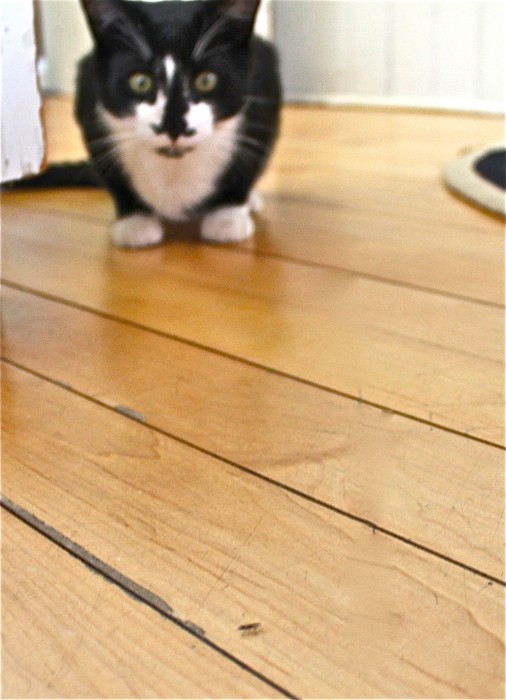 This is my all time favorite photo of Jack.  I love Jack’s loony eyes!  On Mondy, I’m going to ask Kellee to make computer wallpaper out of this one so you can download it from the “free stuff” in our web store! 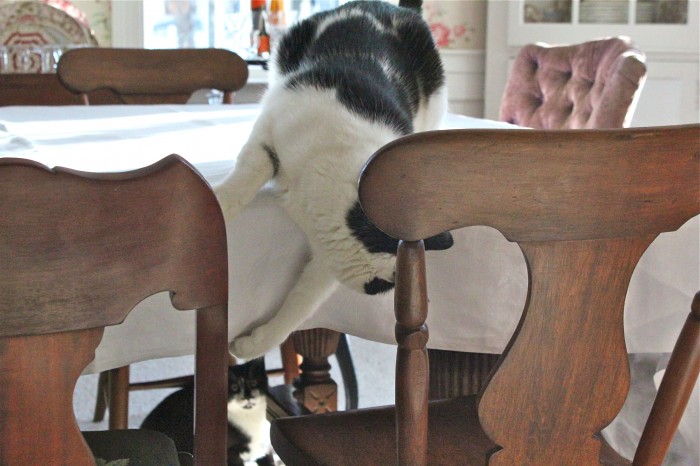 That Jack would turn out to be a “buddy” for Girl Kitty was faulty thinking; she would like to make him disappear, but he’s much too fast for her, and he can get into tiny spaces she can’t.  She does move a little more, in order to get away from him, or, on the other hand, when she decides to go after him; every little bit helps.  But to get a cat for another cat?  I found out that really should not be the reason to get a kitten!  The main reason is just good old fashioned el oh vee ee.  Love.  Or, eff U en.  Or, el A U gee ach (ing).  Those are the reasons. ♥ 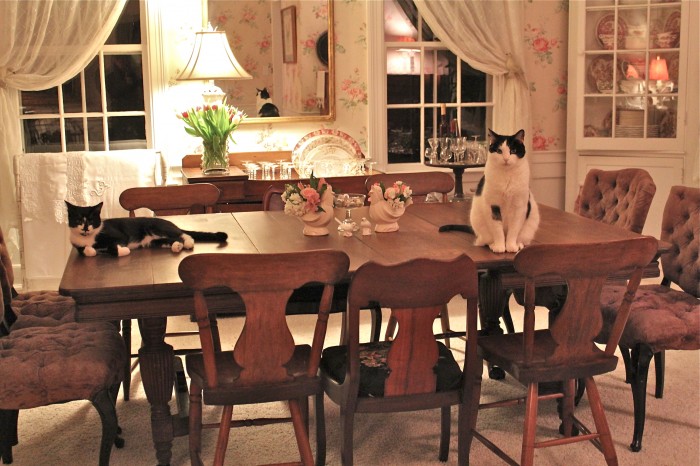 At almost six months old, Jack is part of the family.  Girl puts up with him, I even woke up and found him sleeping in our bed one morning, which is a first, and still the only.  She usually runs him right out of there.  As well she should.  Her house first!  So it’s all working out, in it’s own way.  Let me see, is there one more photo of Jack to finish this off . . . Let me look at the ten and a half million I have taken so far . . . 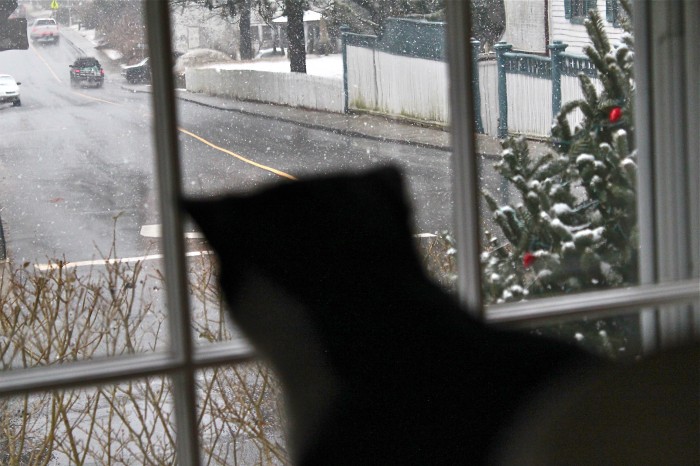 Here’s Jack, watching our most recent snow fall.  He is my best new decoration for our front window!

To close, if, after all of this, you find yourself craving a MUSTACHE of your own, check out your local shelter, or click right there, you can print this one out: make straws out of it like Kellee’s; tape it on your finger and hold it under your nose for interesting dinner-time conversation; or perhaps your cat would like to wear one for solidarity, one for all, all for one, cat style —  just know, we are thinking of you!

404 Responses to Everyone is a Winner Today ♥