Last night, we ate delicious pub food at the George Inn in Cranbrook (we are addicted) and this is the music they played  . . . made me almost homesick! 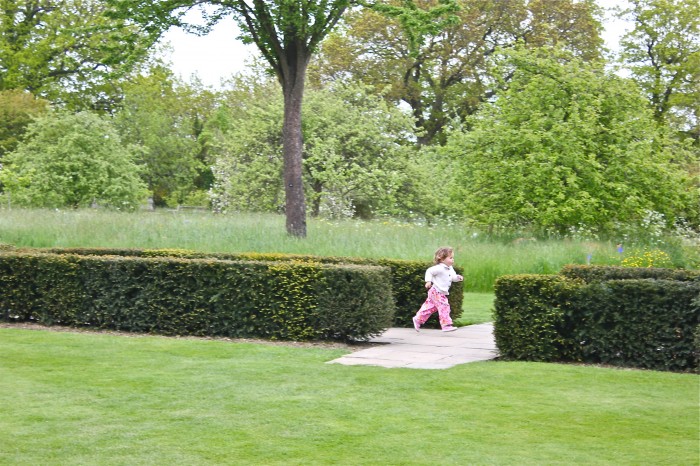 This photo is my absolute favorite of all the photos we’ve taken so far!!!  Joe took it; isn’t that little doll the picture of joy?   She’s running between the hedges on the Long Walk at Sissinghurst Garden — it’s exactly how I feel every day; my feet didn’t touch down at Sissinghurst either! 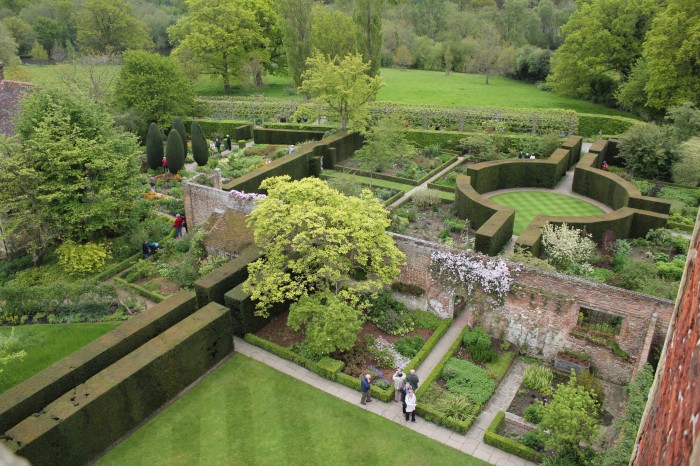 Here is a photo I took from the top of the Sissinghurst Towers, so you can get a general idea of what the garden is like.  But don’t worry, we’ll climb down and get up close and personal with it and you’ll see that although some of the hedges look like they’re cut from florist oasis, they are real, soft bushes. The little holes on the top are where the birds go in and out to reach their nests; hedges are “bird motels.”  The long hedge you see on the left is part of what is called “The Long Walk;” a charming feature that occurs in many formal English gardens. 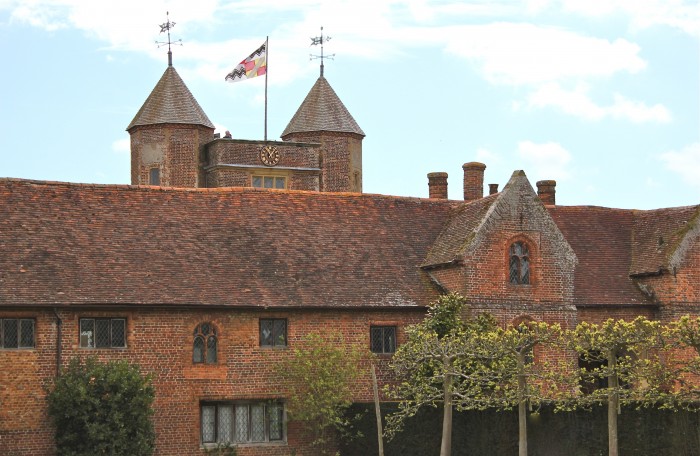 This is Sissinghurst Castle, with the towers peeking over the entrance way to the house . . . for the “aerial” photo; I was standing up there between the towers, under the flag, over the clock, where you can see that little person. 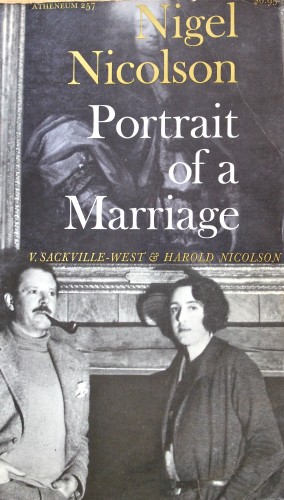 This is really the garden that planted the seed of England in my heart; all because of this book which I read when I was twenty-four.  Portrait of a Marriage was written by the son of Vita Sackville-West, and Harold Nicholson who were the owners of Sissinghurst; every other chapter is directly taken from Vita’s Diary, and her son Nigel wrote the chapters in between.  Besides the era, and my interest in those times, two things from this fascinating book resonated with me and opened doors in my mind.  The first thing was that, until then (and I really do hate to admit this but at least I figured it out before I was fifty!  The way I was going, it could really have taken that long), I believed that everyone pretty much lived exactly like we did at 6847 Claire Avenue, Reseda, California, USA.  I thought they believed the same things, did the same things, read the same things, they all sewed and embroidered, they all thought the same things were funny, they all loved to camp out and cook, they all loved to sing in the car.  You grew up, you got married, you had children, you lived happily ever after.  That’s just how I thought it was for not only me, but for everyone.  Any deviation would land you in the gutter, or prison or something.  But this book showed me that people lived and thought in very different ways, ways that I had never imagined, and that even though it might not be my way, it was a good way for them, as “normal” as me, and worked out just they way they wanted it to.   What a revelation!  No more judgy-wudgy.  Just like 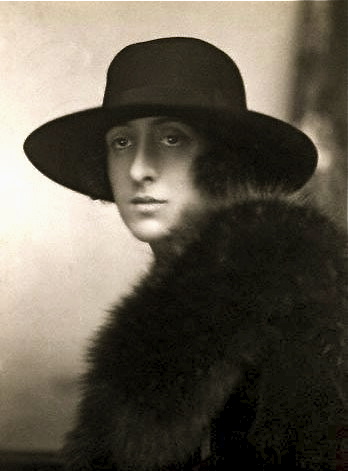 that.  And the other thing was this . . . these two people had a passion bigger than themselves that helped to keep them together and enthralled with their lives.  It was their garden.  And what they did with a bare plot of land, although it is in amazing England with the perfect soil and the rain to boot; what they left behind for the generations to come, is pure magic.  It was the first time I knew that there “were gardens in England.”  I dreamed of seeing Sissinghurst ever since I read this book, but first I had to move to Martha’s Vineyard, meet Joe, fall in love, develop the dream and the idea of making it come true, and when I finally got there, surrounded by all Harold’s and Vita’s creativity and dedication, tears leaked from my eyes, as I stood in the mown path of the wild garden meadow for the very first time, on a misty cool May day, smelling the flowers of the spring blooming apple trees. 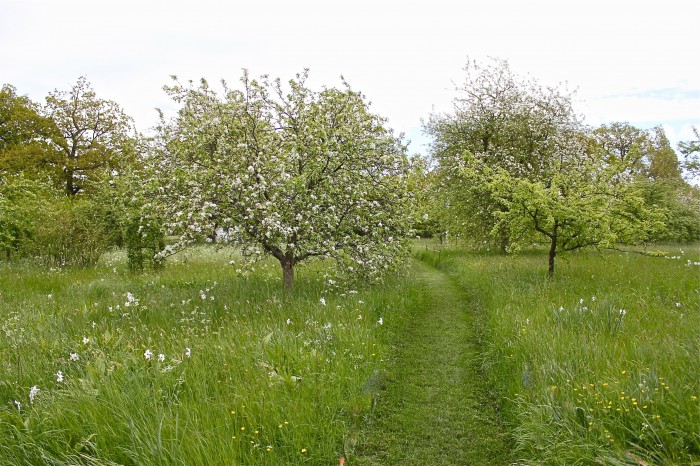 Victoria Mary Sackville-West, Vita, was a prolific writer, a poet and journalist, born at another amazing house not very far away called Knole, which we are planning to visit soon (Oh yes, I will post pictures when we do!).  She would have inherited that amazing home, more of a castle, had she been born a boy.  But since she wasn’t, her father’s younger brother got the house and she just had to move away.  This would light my hair on fire for a lifetime, which I think it did hers,  but British aristocracy had some interesting laws in the old days, and luckily, in my family, that problem never came up! 🙂  Vita and Virginia Woolf were friends and lovers; which is the connection between Vita and the artists at Charleston.

Vita was one of the very first people to plant a garden in all one color; her White Garden is famous the world over.  Click there and prepare to be amazed and inspired!!

It’s May, that lusty month of may, all the world is coming awake, and here in England, the gardens have just begun to bloom. 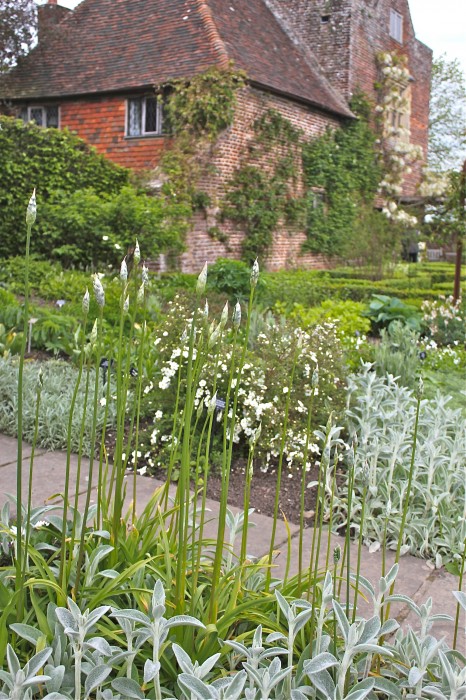 This is the house that anyone can lease (through the National Trust) for a stay right here in the White Garden — but the trick is to definitely Book Ahead!  It was already booked up when we tried to get it. 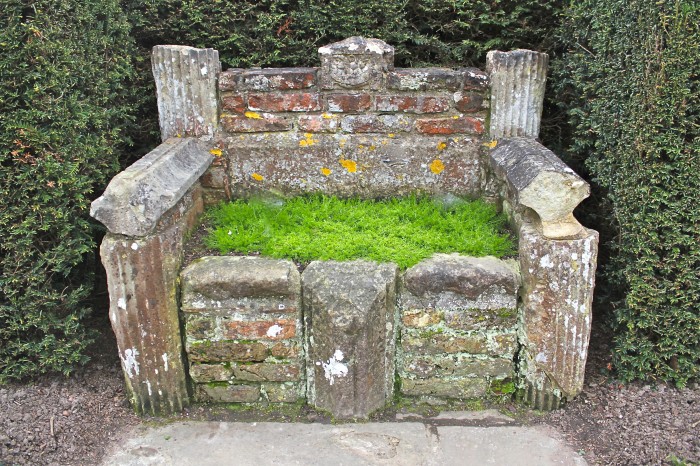 The camomile bench smells even better than it looks!  I can only imagine what it looks like when the little daisy-like camomile flowers bloom! 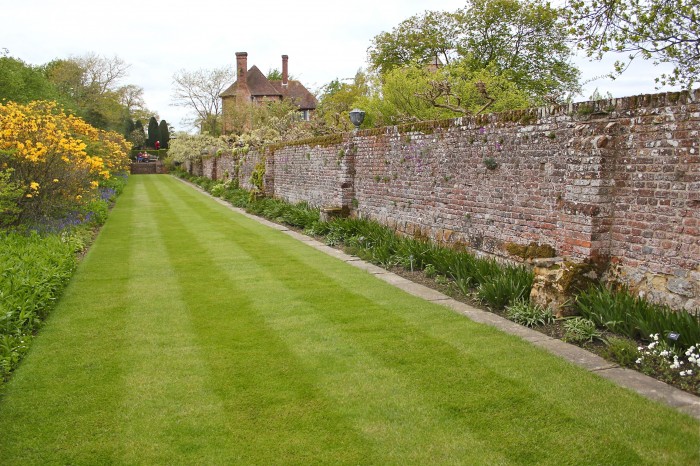 Harold designed the structure of the garden; then built garden walls, planted hedges and pathways to make the  “rooms” that give the garden shape. 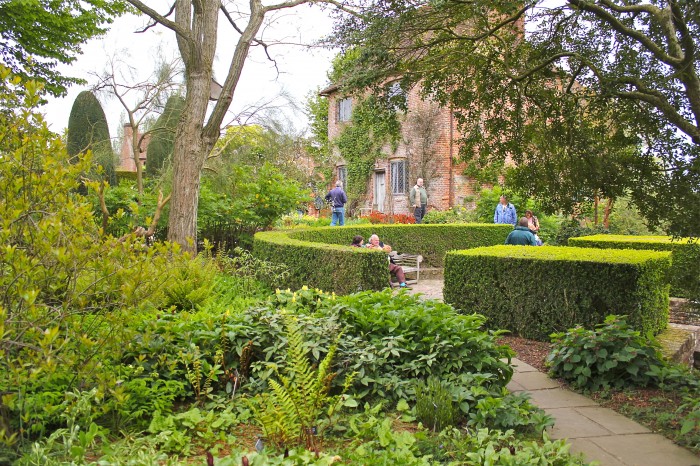 Every bend of a stone, brick, or dirt path brings surprises; an herb garden-room, long walks through pleached lime trees (that Harold planted in rows and made to grow together to become one!!!), a blue-painted door in an old wall; brick archways, garden statues, yew and boxwood bushes carved into shapes; wooden and stone benches for sitting and talking.  Or a happy running child running between the openings in the hedge!  You never know what you may see. ♥ 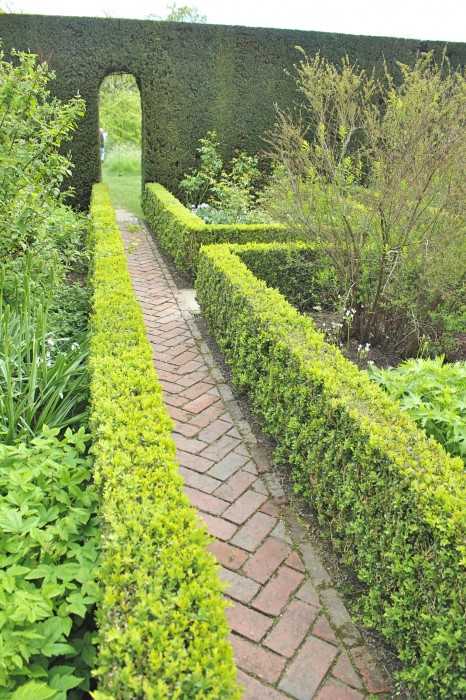 I never knew there were so many colors of green until I came to England! 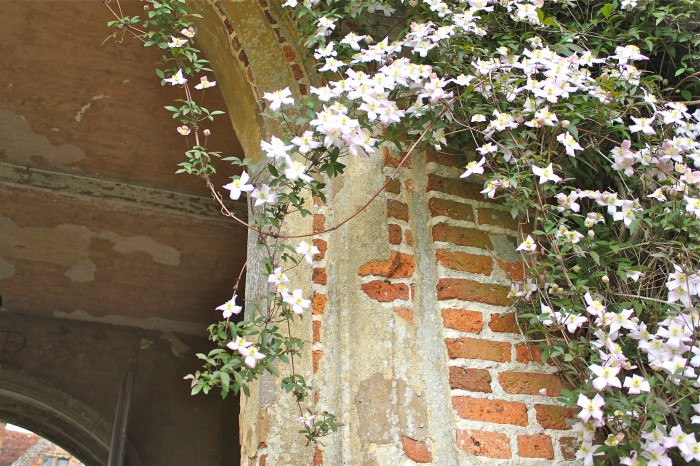 I fell in love with this pink clematis and now it grows over our picket fence garden on Martha’s Vineyard.  Maybe not as wild and fluffy as this one, but mine is a lot younger!  We still have some growing to do! 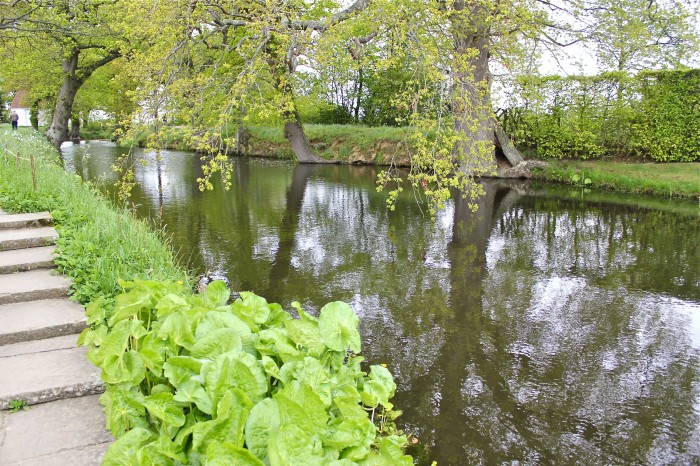 As you turn each corner, you make little screaming sounds inside, like when you find the moat (all good castles have moats!), with the reflections of the trees, the tiny, fragrant flowers of the blooming Hawthorn, the stone path to the boat house.  There are nine full-time gardeners here, a gift store and a tea room. 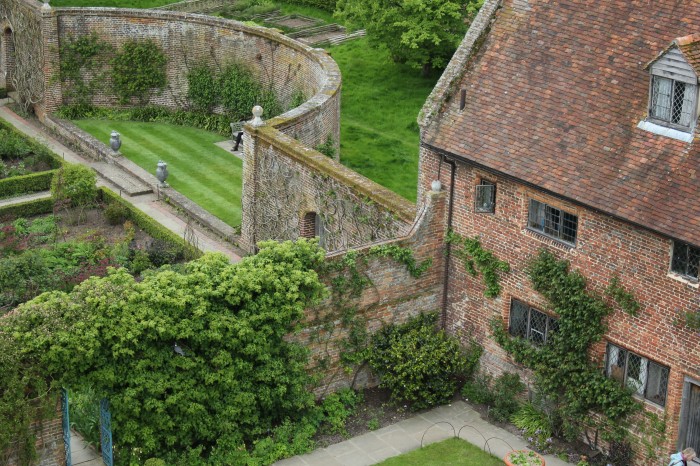 Sissinghurst was a huge Elizabethan manor house at one time.  In the 1300’s, my blood relative (although we seem to have lost touch with the family 🙂 ), King Edward I, known affectionately as “The Hammer of the Scots,” spent the night here (Edward got around; in 1305 he paid a visit to Tenterden, the town we’re staying in now); and in 1573, Queen Elizabeth I spent three nights at Sissinghurst.  By 1800 most of the castle was in ruins; they demolished it, and carted it away, salvaging what they could for future building projects.  What we see here is all that is left, but these beautiful impressive ruins still show a bit of its former splendor.  Vita, deprived of her own home by archaic law and custom, bought the remains of a castle, and created her garden here. 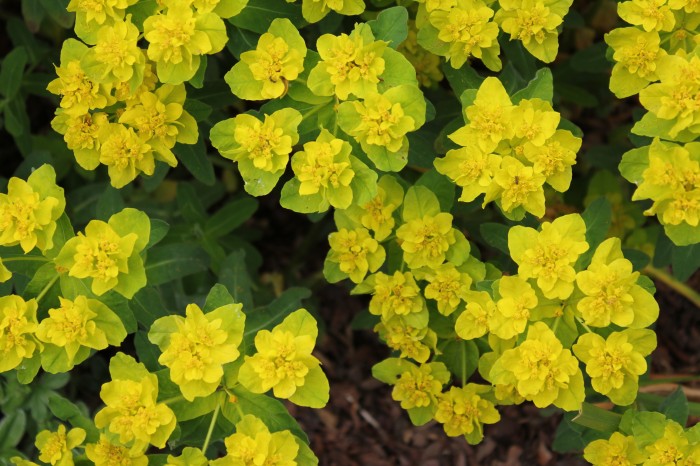 What is this?  Does anyone know?  I looked for the little marker to tell me, but couldn’t find it.  Love it!  What a fresh and happy spring bloomer! 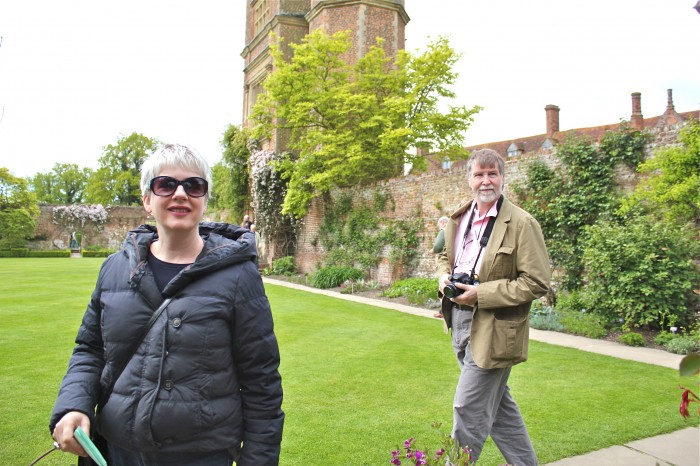 Here are a couple of other fresh and happy spring bloomers; that’s Rachel (who started out as my English Pen Pal in the early 1990’s and is now one of my dearest old friends) and Joe! ♥

And as lovely as the squealing belted pigs, the wild garden, the Cow Parsley (Queen Anne’s Lace in our neck of the woods) and the moat are, all good things must come to an end.  And so this day did, but of course the ending is never sad as it always takes place in a lovely pub, in front of a delicious fire.  As the screen says whenever I turn the TV on around here:  Life’s Good.

Now would you like to take a little drive with us?  It’s so pretty — I could post every single time we drive anywhere, and you’d be amazed at how beautiful it is.  I’ll do more if you like, just let me know . . . But better fasten your seatbelt, and get steady, throw back some whisky (you aren’t driving!), as we are going out there on the wrong side of the road; I’m about to show you what a true adventure it is!  TGFJ.  Thank God For Joe and nerves of steel.

In that video we were on our way to Hever Castle, the childhood home of Anne Boleyn, which we saw yesterday!  More gloriosity (not a word, but obviously should be) to show you soon!  Happy Sunday girlfriends xoxo! I’ll leave you with what I see as the PERFECT magazine cover.  I have never before bought this magazine; I don’t even know what is in it, but how could I resist getting it????  Cutest little Corgi!  Everywhere we go we see England celebrating the Diamond Jubilee!  Every little town will have floats and parades in honor of the day! 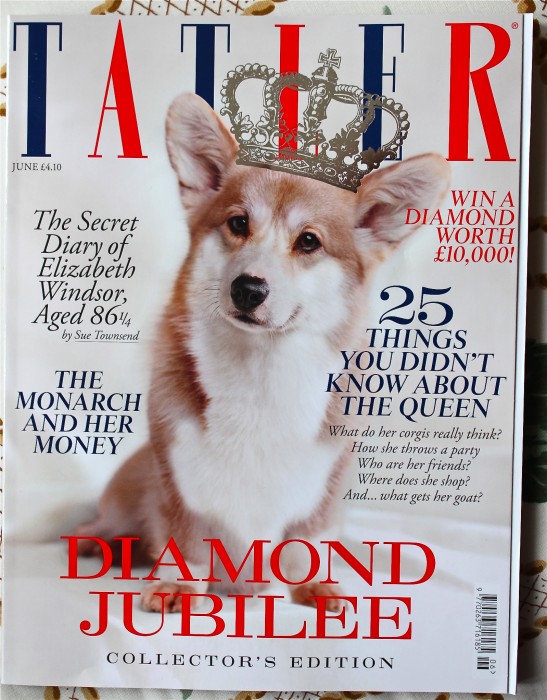