First the Music (this one’s for my dad) then the Links to everything I can think of . . . fun things to look at or watch while we drive to the Ocean Liner.  Are you packed?  I just remembered that in England there are lots of deep bathtubs, so while my tea water was boiling I ran upstairs and got the bubble bath and tucked it in!!  OMG. 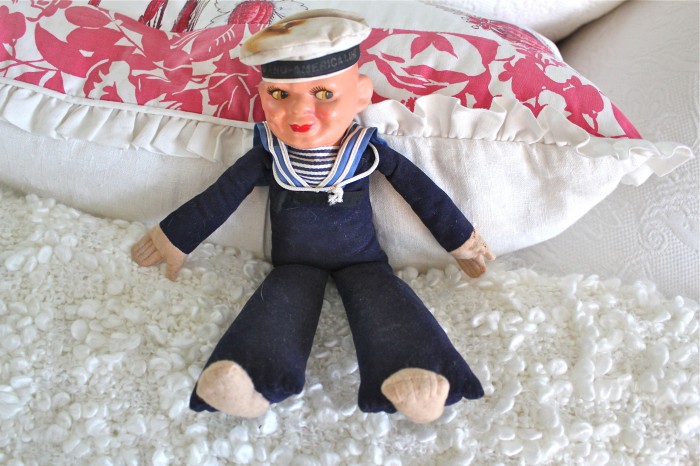 Yesterday, in the middle of the packing, my eyes landed on this souvenir doll Joe got when he was twelve, on his way home with his mom from England on the Holland America Line (I forget which boat!) so I thought I’d take a picture of it to show you.  It survived really well, except for the time the top of his hat apparently got a little too close to the fire! 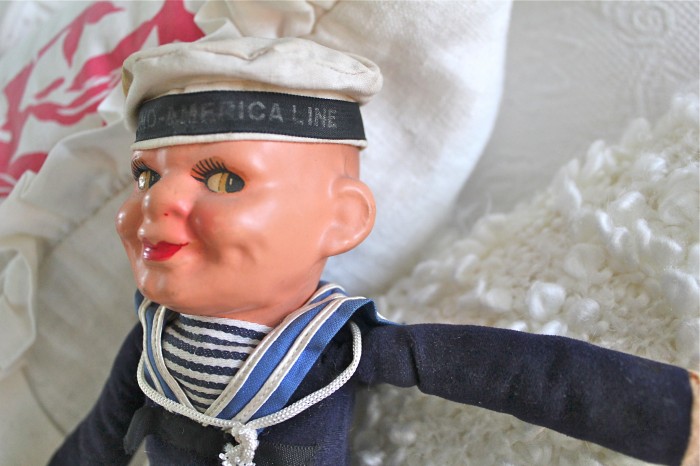 Rather frightening face don’t you think?  Bad dreams could come from this.  But as you will see, he turned out to be quite a fine fellow.  And as you know, it is rare for me to take a picture these days without my little shadow popping in.  My adorable little shadow. 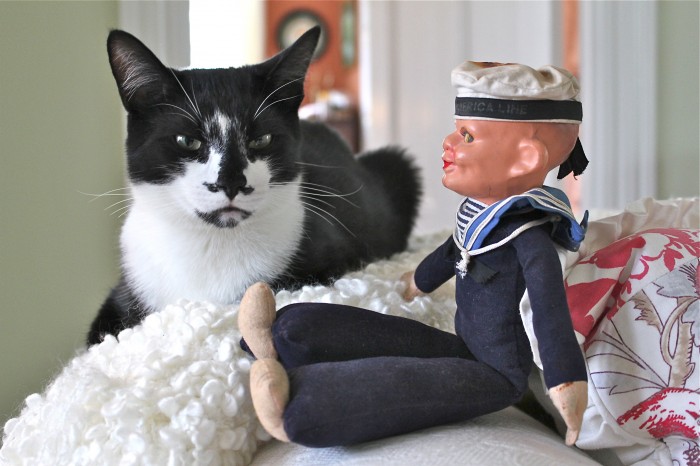 Jack is thinking, “Him? You’re taking picture of him? Why?” 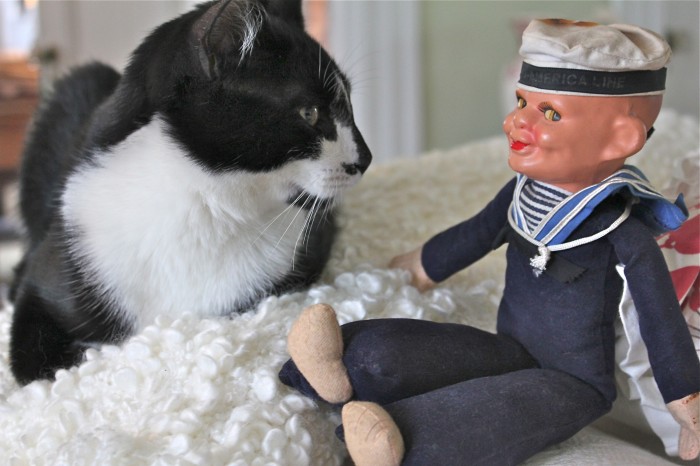 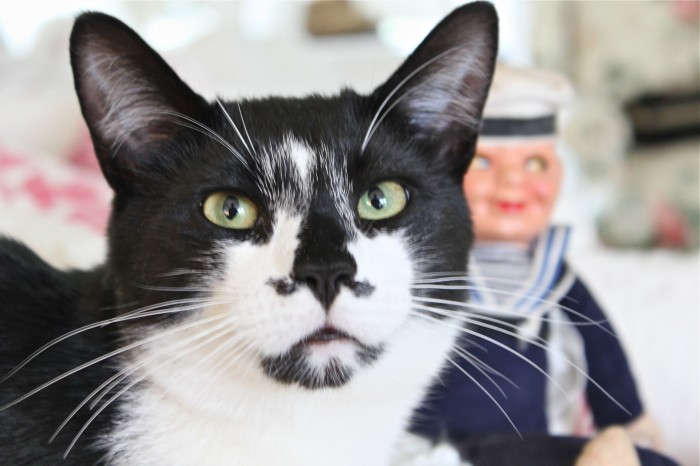 “Do you like him as much as you like me?  Look at his eyes!  He can’t even focus.  You want a friend that can’t focus?” 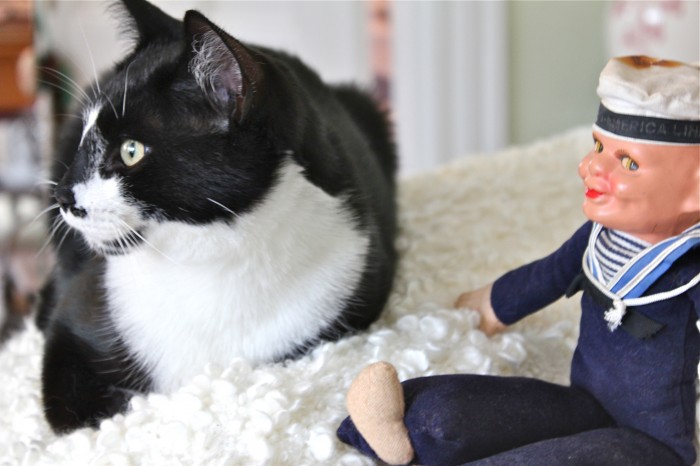 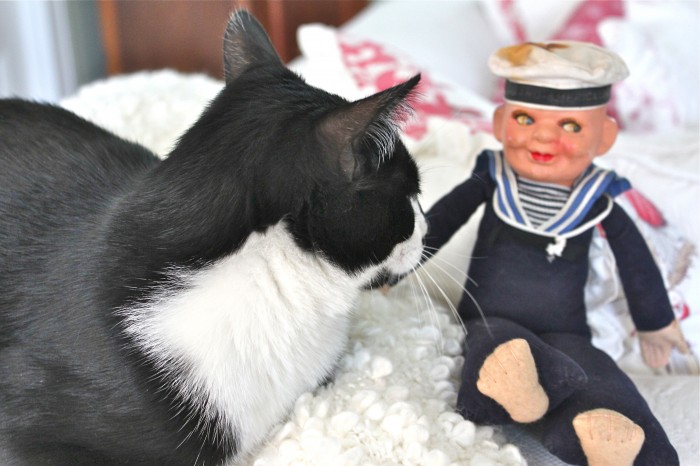 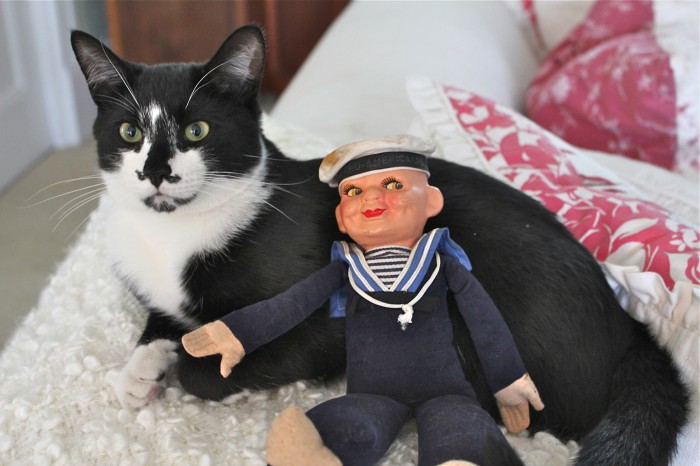 “But hey, he doesn’t seem so bad — he’s kind of growing on me.  He sure doesn’t talk much; he must not be related to you!  Does he have a name?” 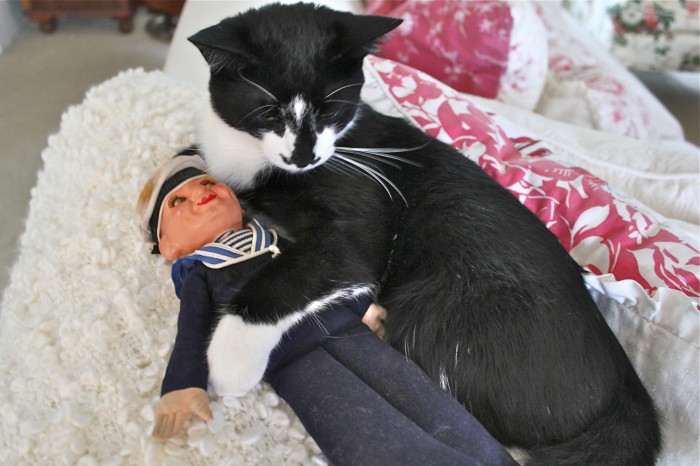 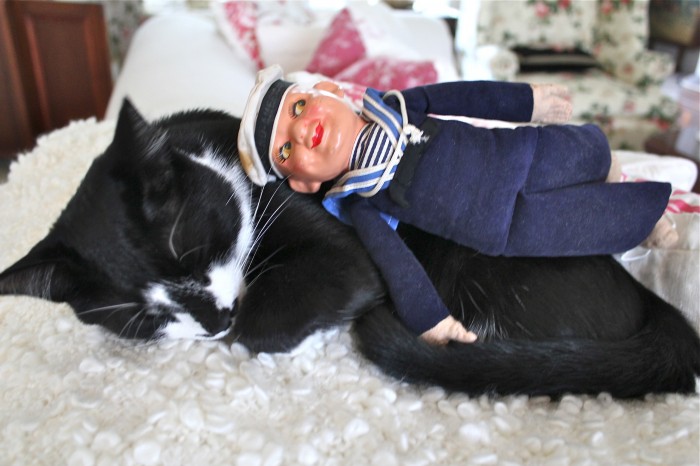 And so it goes.  Right this moment I can hear the pitter patter of little feet running around upstairs; Jack and Girl playing!  They’ve been doing that all this week!  I think by the time we get home, with no interference from me, my two kitties will be bonded. Sometimes mom just has to get out of the way! 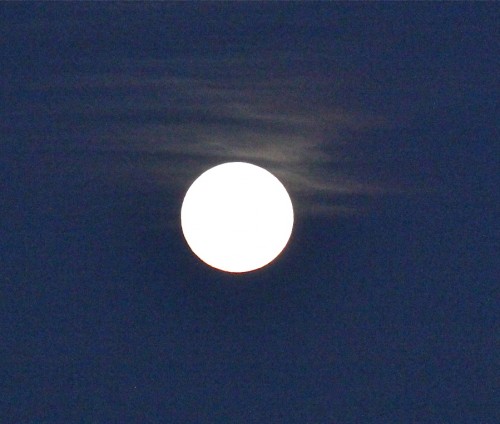 SO, I have to go, as you know!  But here are some links, most of them have come in from our girlfriends, I thought I’d put them all in one place so you will have this easy reference: First off, the MOON, Saturday is the full Flower moon.  We could have stormy skies at sea and not be able to see it, but we know this is what will be shining down on us; and YOU, the biggest moon of the year. Be sure to go outside and make a wish on it.  My wish is that I can take photos of moonrise from the rail of the ship! 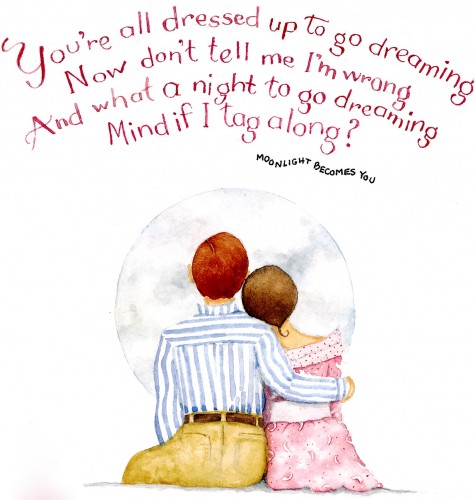 Next, you might want to take a virtual tour of the Queen Mary II.  This is the BEST LINK for the ship, you can see EVERYTHING!!! Just put your cursor on the words underneath the British gentleman and choose what you’d like to see. Put your luggage in the stateroom of your choice!  Then meet us in the Commodore Club for a Pink Champagne Cocktail!

Next, when the ship pulls out of its berth in New York, it will be going under the Verrazano-Narrows Bridge past the Statue of Liberty on its way out to sea.  There’s a web cam, you can watch us go, live!  Don’t worry if it’s raining; ships do fine in the rain … it might rain because it’s spritzing here right now!  But if it’s dry, look for me on deck, I’ll be waving at you!

This camera is perched on the bridge of the Queen Mary herself.  Day and night, it provides a view of whatever the Captain sees all the way across the Atlantic, like 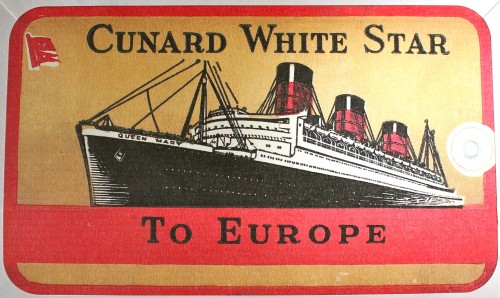 watching the hummingbird nest only with nothing in the nest! When the first lights of land are visible, we can see it from the TV in our stateroom and run outside to call “Land Ho!”  You can look at it right now and see what the ship is doing; I just looked, it’s almost daybreak out there; the Queen is approaching New York to pick us up tomorrow!  No Land Ho for them yet, but soon! 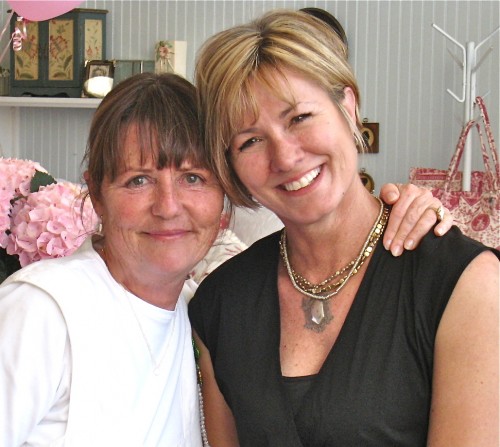 This next link has nothing to do with the ship; but if you live in California, and are itching for some FUN … it’s time again for the Remnants of the Past Vintage Show in beautiful San Luis Obispo. You know this is my friend Judy Watkin’s show; rated the best in the country by both Romantic Homes and Country Living Magazine, among others!  I was there last year; it’s a Girlfriend’s Extravaganza, just a great weekend in the California sunshine, among the flowers!  I’d be there this year, except, as you know, I won’t be here!!!  It’s not until June 2 and 3; so if you want to go, you’ll have plenty of time to plan.  Be sure to say hello to Judy for me!  She’s just as sweet as she looks! ♥ 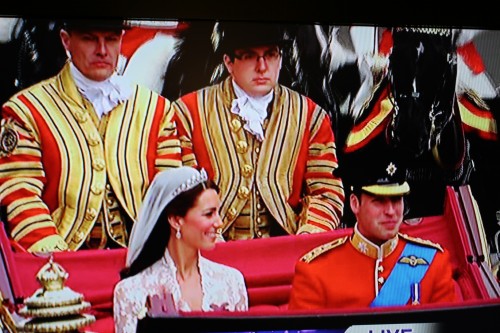 Last but not least, I want to leave you with a little bit more music . . . one of my very favorite songs by Marilyn Monroe . . . she’s singing Bye Bye Baby to her boyfriend before she sails away to Europe in Gentlemen Prefer Blondes.  He’s sad she’s going, but she has a way of talking him right out of it!  (I’m so lucky I’m taking my boyfriend with me!)  She’s on the loose but she’ll stay on the square!  I know I’ll be singing this as the ship pulls out!  Singing Bye Bye Babies … that’s to you! We’re going to England!  Hooray!!!!  XOXO

This entry was posted in Blog and tagged Links to travel, ocean liner memorabilia, vintage doll. Bookmark the permalink.