8 am on a rainy day on Martha’s Vineyard. I slept in to 5 am this morning, which I think would be about 9 am in normal-people time. I LOVED it!  A red letter day! Joe just made us a fire and Dark Victory is on TV. I feel so happy because by this time next week I will be totally and completely done with all work I assigned myself. All I will have to do is plant the garden and write us a new Willard before I go. Here’s the song I woke up singing this morning: MUSICA (let it play for a moment and it will wrap magic around you). 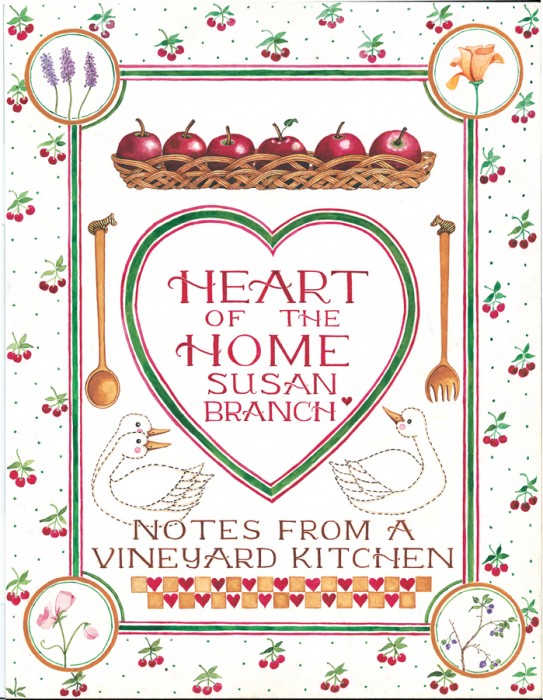 I almost haven’t missed Downton (almost) because I’ve been so busy with my newest and last project for 2016. I’m getting my first book, Heart of the Home, ready for it’s 30th Anniversary. It’s, as they say,  “revised and expanded” ~ what started as a 160 page book has grown to 176 pages, with lots of new recipes, quotes, and art. ♥ Thirty years! Can you believe it? My first baby is 30. It’s been like stepping back in time because I’m doing the pages just like I did them originally . . . 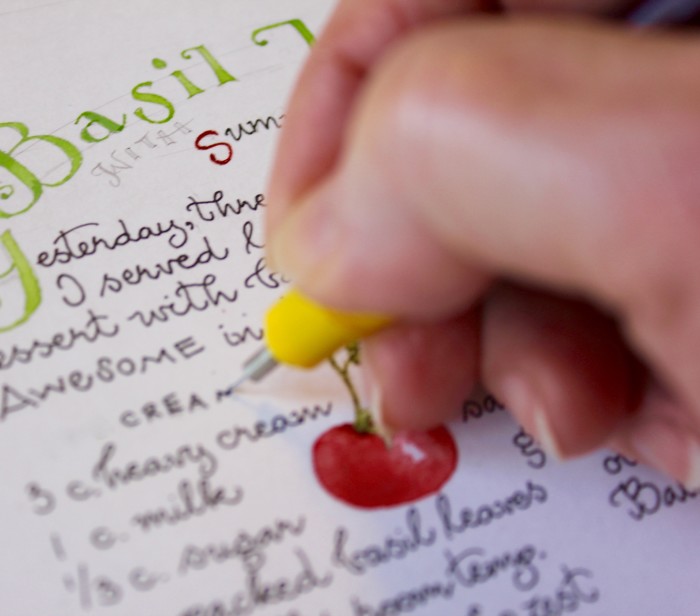 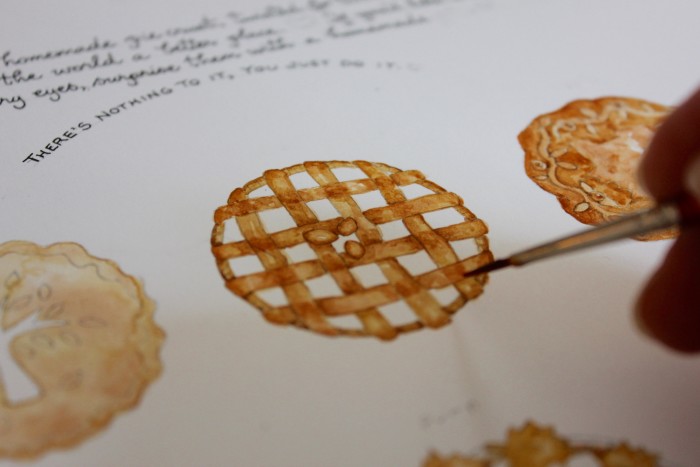 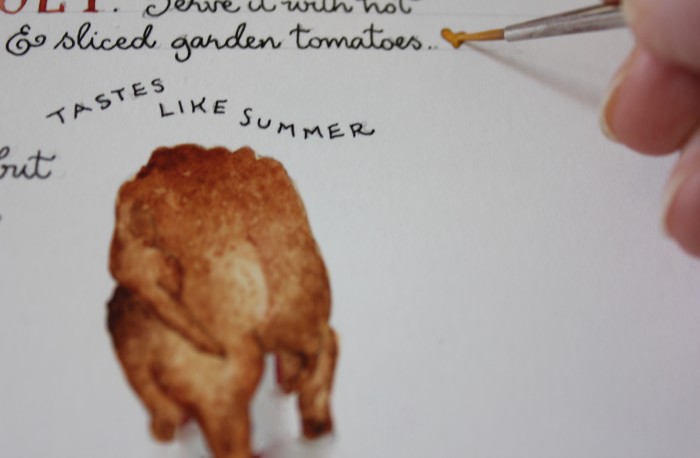 And chickens . . . and bowls and jars and spoons and all sorts of fun things.

I’ve picked out a bright red grosgrain ribbon for the bookmark (my first book didn’t have a ribbon originally, but it will now). I’m designing new endpapers 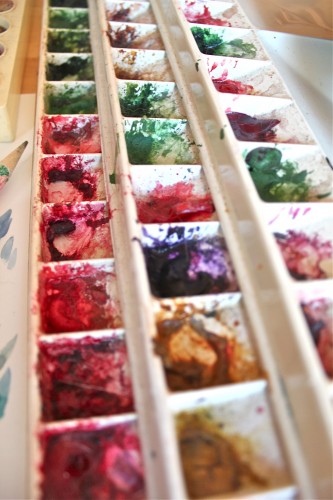 (they were just plain white before), and I’m adding a new border to the cover . . . While I’m doing it I feel myself back at that dining room table in my first little house on the Island 30 years ago (as you’ll see when you get Martha’s Vineyard Isle of Dreams, because I write all about it there). Which means, perhaps, that it’s not just a trilogy of books I’ve done anymore, now it’s a, what is it, a quad? A quadroopalidge?  This new version of Heart of the Home dots the i and crosses the t of all of my last three books, plus

you’ll have a new cookbook for Christmas.  So while we are sailing over the Atlantic, you’ll have something new to look forward to. I’ve been thinking of you the whole time I’ve been doing it, asking myself “what would they like?” . . . and because of that, I think you are going to love it even better than the first one! 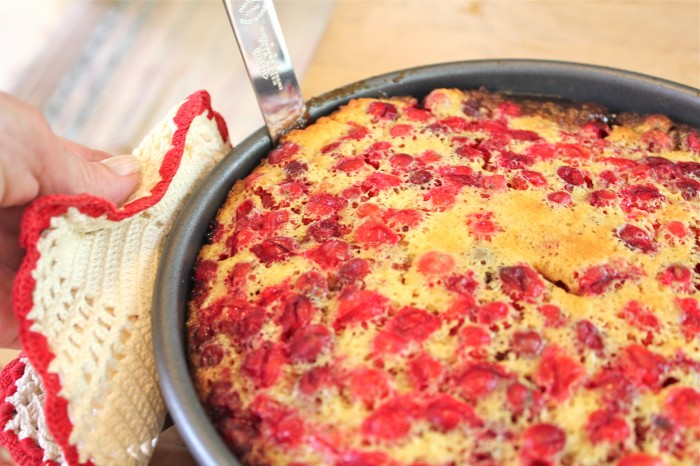 Remember that Cranberry Tea Cake, (with butter and sugar and eggs and cranberries and oranges and sticky pecans that put together say,”I love you”)  I told you about months ago that I was “saving?” Well, I’m not saving it anymore! 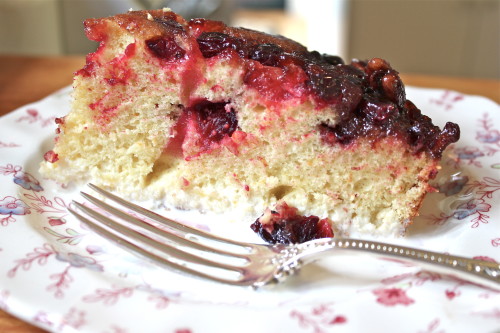 It’s finally going to be yours . . . it’s been horrible saving this recipe, it’s so delicious and not in my nature to be a hoarder, but now I’m glad I saved it! ♥ 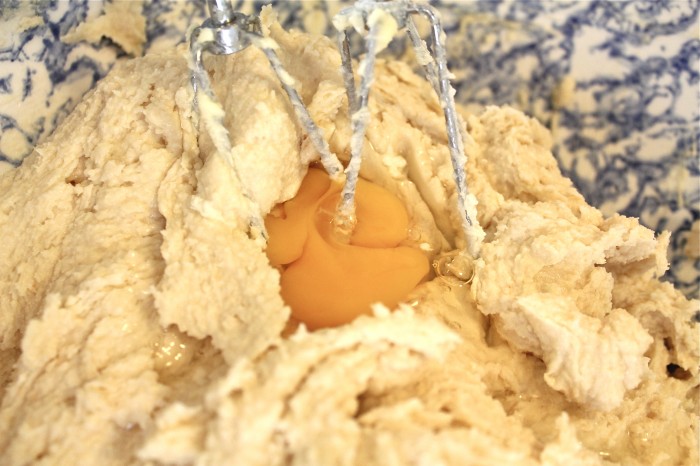 I’ve been having a wonderful time being back in the cookbook business! It’s a very creative place to be. 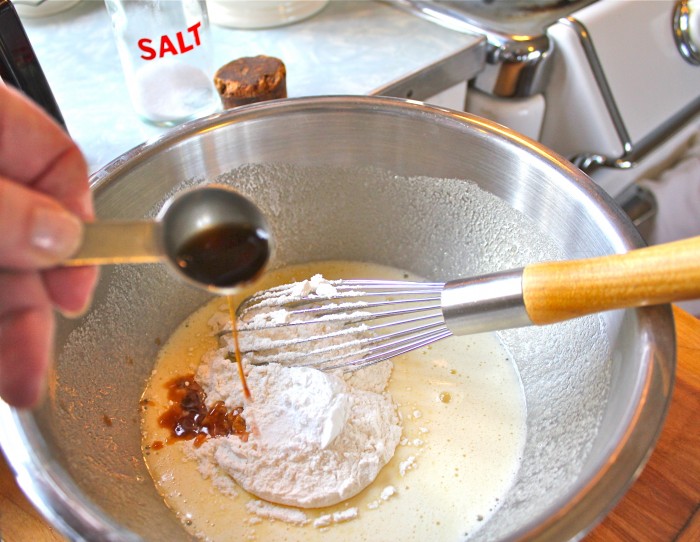 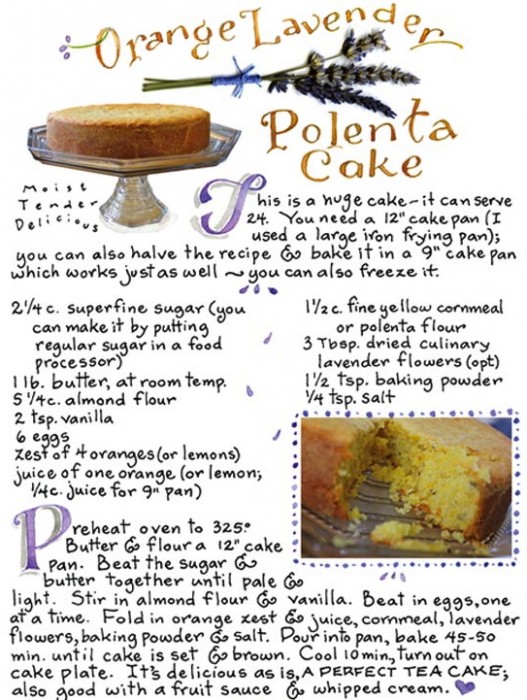 I was thinking about substituting one of the other recipes with this  . . . it’s already printed in A Fine Romance, and you may already have it, but maybe it

would be easier to remember if it were in a cookbook? What do you think?  It’s SO delicious, I don’t want anyone to forget about it . . . I also don’t want to take away the essence of the 1986 cookbook, but I do want to make it extra special for you. I only get to add 16 recipes, which I’ve already done . . . so, if I put this in, I would have to take something out. Which isn’t hard to do, how many cakes are there that serve 24 people? Gluten free? And I think this cake is REALLY good! So, if you want it, I’ll be happy to include it, and I won’t feel bad if you don’t because it’s already in A Fine Romance! Tell me what you think! 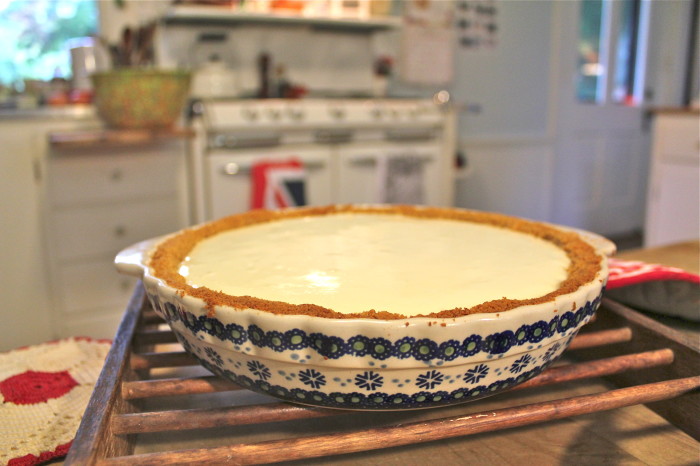 What makes it especially fun is that there are already so many good recipes in this book, it’s a great foundation to add on to! And don’t worry, I wouldn’t take this ↑ out! 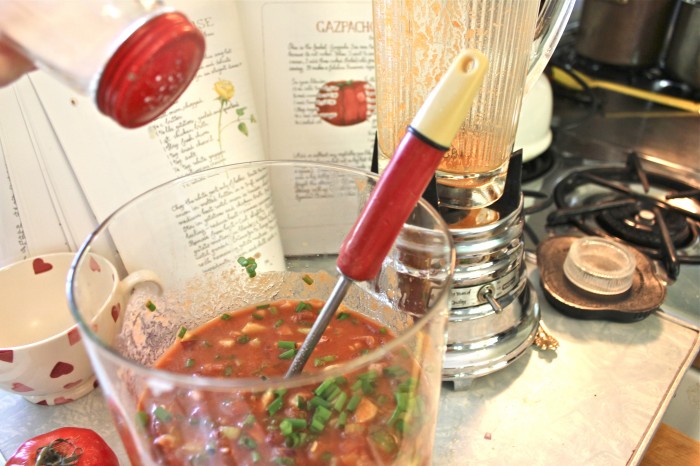 Heart of the Home will still have the best loved recipes in it . . . I’ve added what I hope will be future best loved and family favorites. I’m not going to show you anymore because I want it to be a surprise! 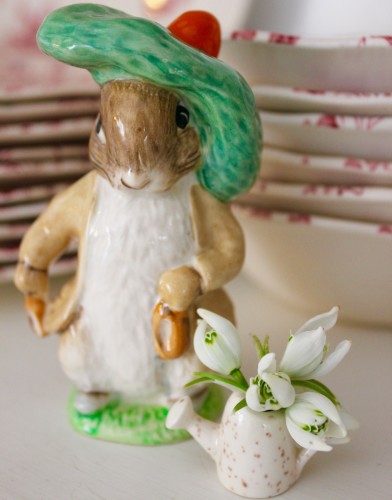 I got the cutest new thing. A girlfriend sent me a homemade card that had this teeny little watering can glued to it as a decoration . . . you can see how little it is compared to my Beatrix Potter Person . . . 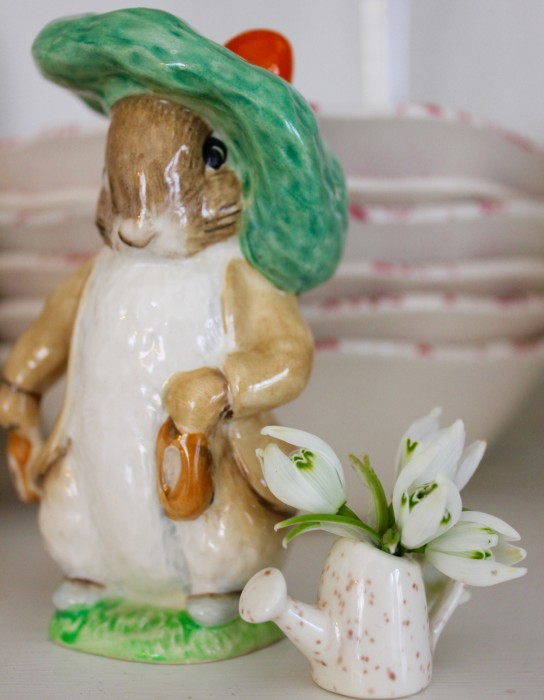 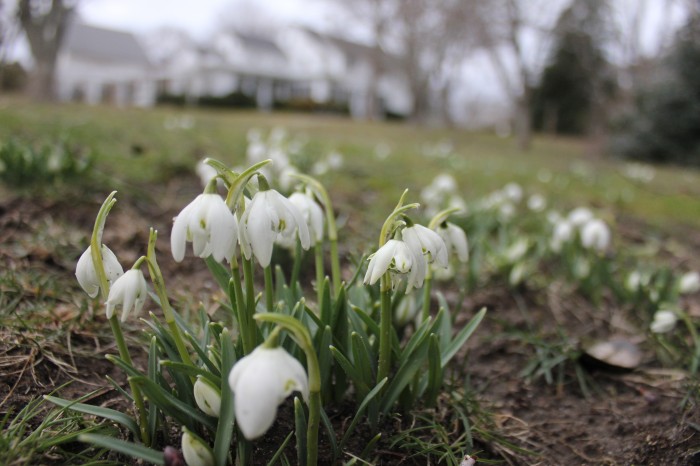 . . . that are taking over our yard . . . in the best possible way.  And today, they are being drenched with rain.

Did any of you see the series called TURN?  It’s a true story about a spy ring for the American side (best-friend twenty-somethings who’ve known each other since childhood) during the Revolutionary War.  I saw season one maybe three or four times now ~ it’s

SO GOOD . . . but I could never find season two . . . by the time I found season one on Netflix, season two on AMC had already passed, and for some reason Netflix didn’t get season two, so I just figured (sadly) that the series wasn’t going to make it.  BUT, I just heard that season three is going to start on AMC on April 25! They are repeating season one on AMC now (hopefully we’ll get to see season two sometime before the new one starts). I think you would love it . . . look at a trailer HERE. It has a wonderful treacherously-threatening theme song, I sang it to Joe when he came down the stairs this morning . . . “There’s snakes in the garden . . .” Love to see him roll his eyes and this song (the way I sing it) does the trick. P.S. There is some violence in this series, NOTHING like what some of them have, but still . . . I found it very easy to get through because I just close my eyes and it doesn’t go on forever. There is this hideous horrible sick nutcase of an officer that causes all the trouble that makes you wish he was dead, and you hope, when they do kill him, which won’t be soon enough, they will do it out behind the barn and just tell us it happened.  He is SO BAD. We will love to hate him. See what you think!

So a couple more sneak-peeks and then I will us all get back to work . 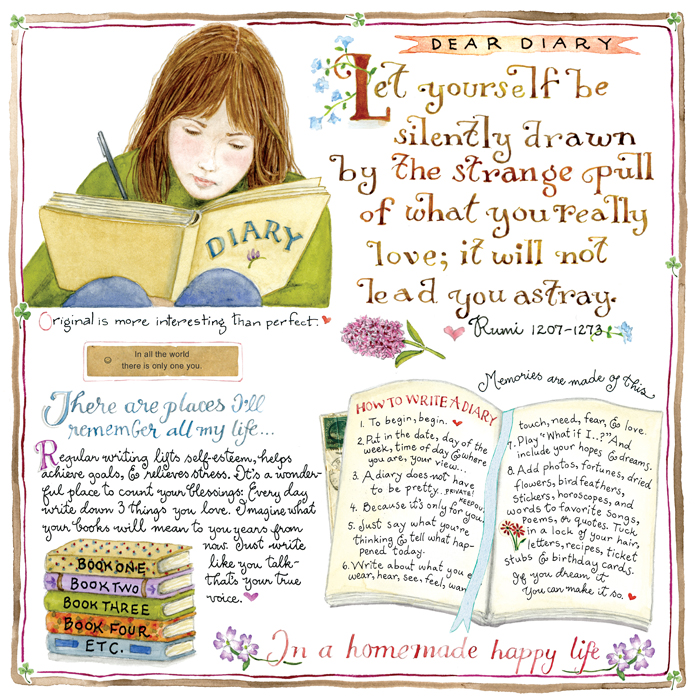 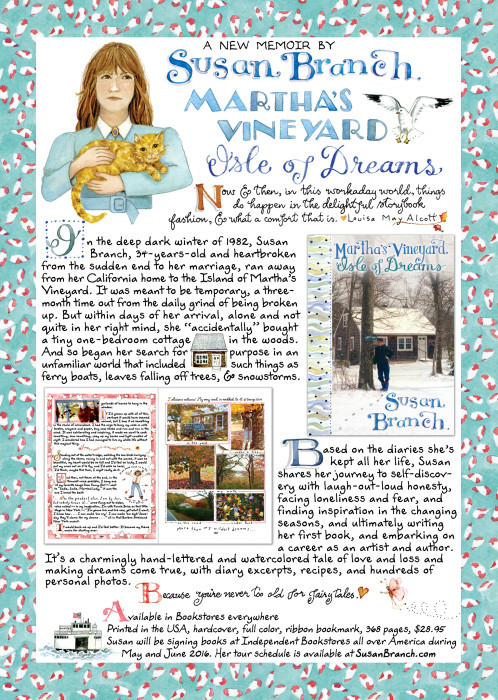 And my full-page ad to go in the May/June issue of Yankee Magazine . . .

So that when I go out to sign my children at the end of April, someone will know about them!  I hope! I hear that lots of you are coming to the signings and I can’t wait to meet you . . . isn’t it interesting that even though you think a certain time will NEVER get here, sooner or later, it does!? I can’t believe that soon we will be driving out of our driveway . . . cooler stuffed with road food, tears still drying from saying goodbye to the kitties . . . heading for the boat and points west . . . 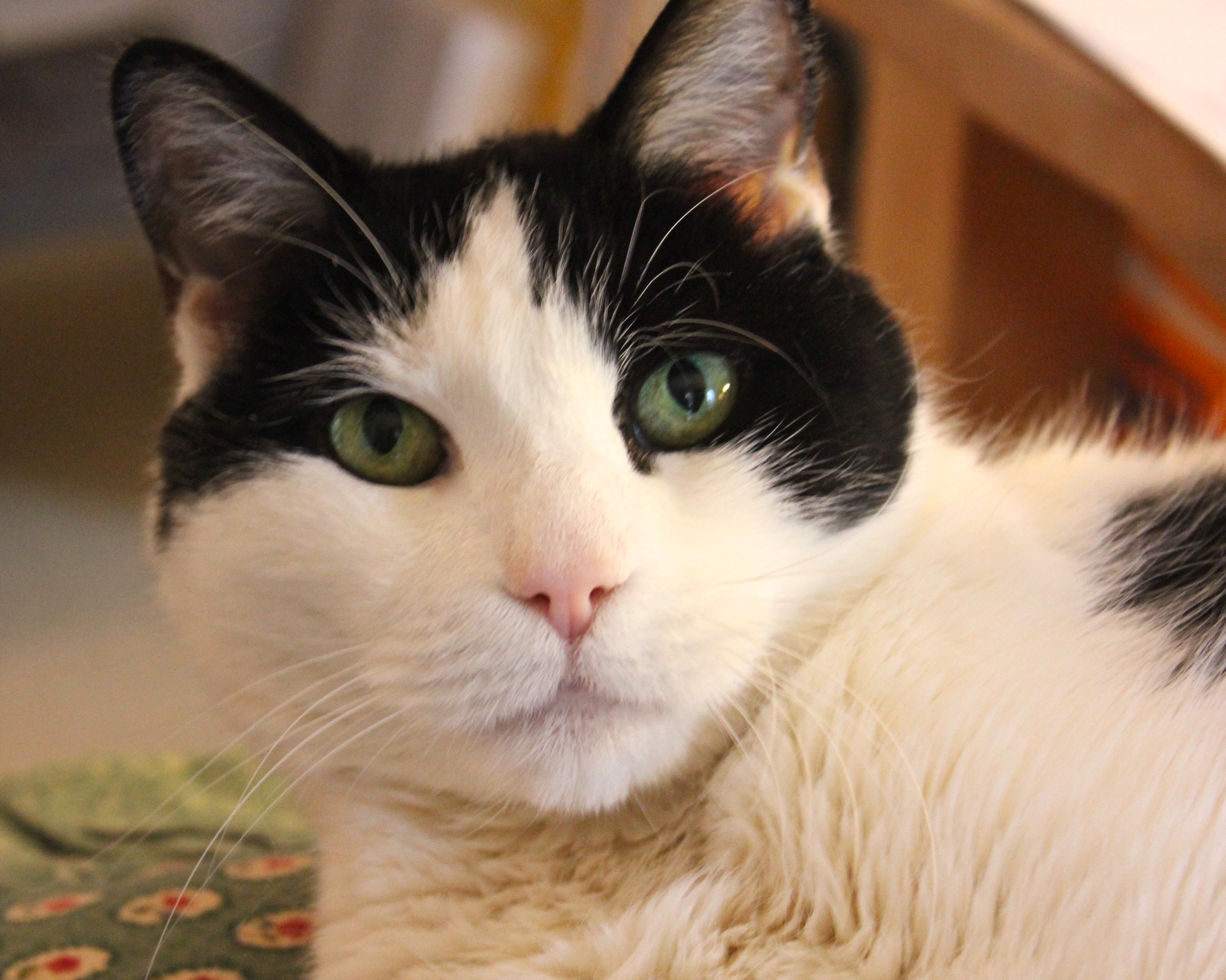 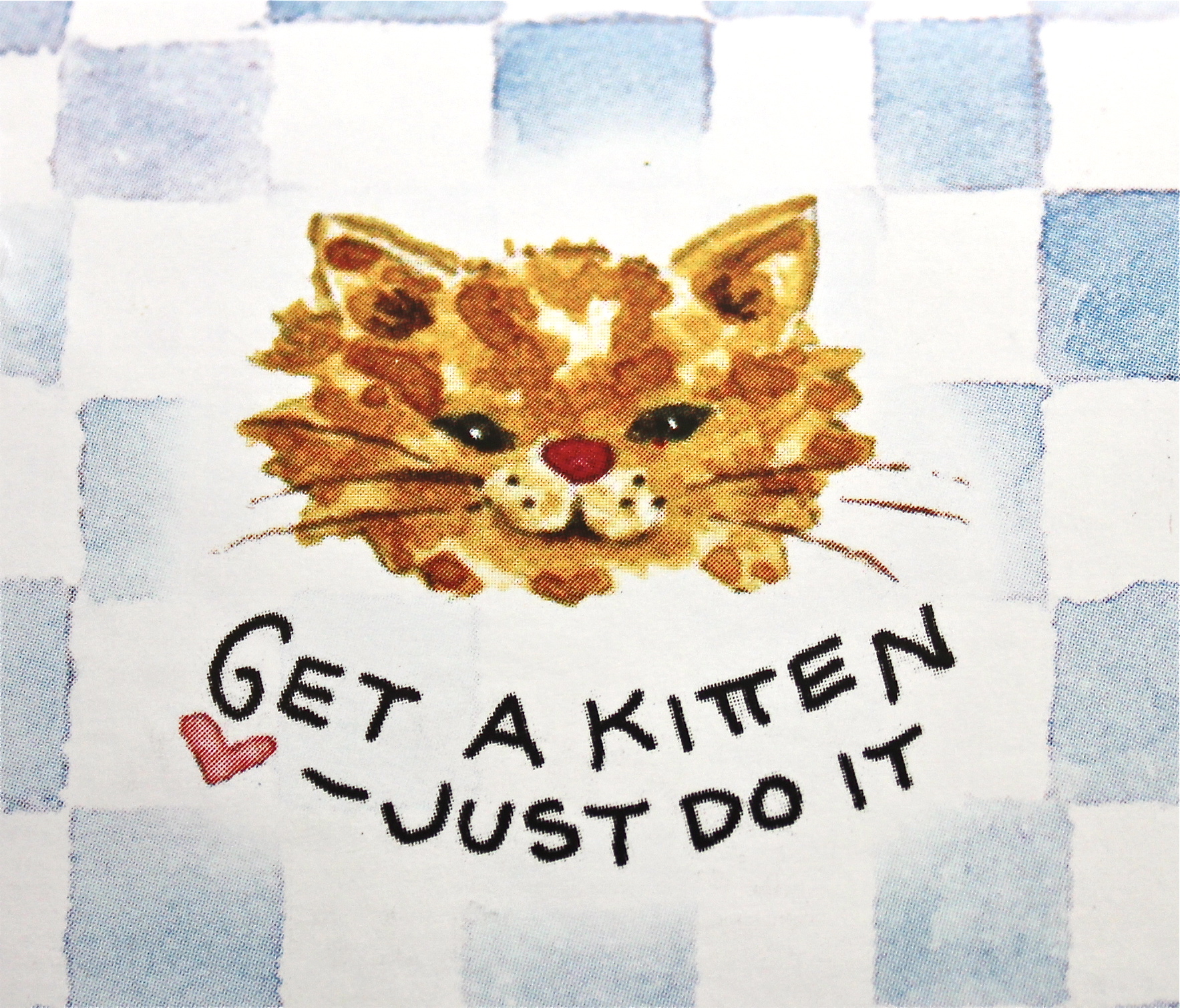 Bye for now Girlfriends . . . answer all my questions, please!  Have a wonderful day! ♥ XOXO